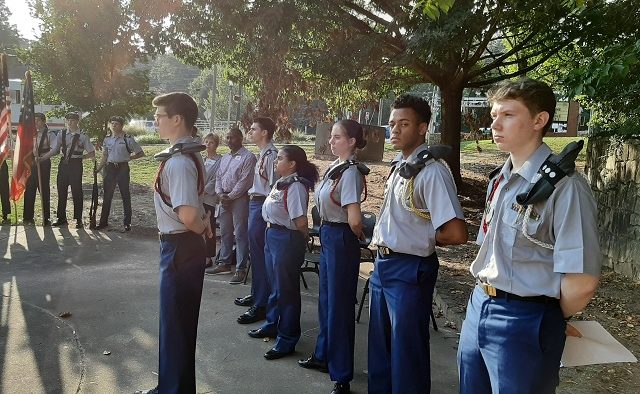 Decatur High School held the 18th annual September 11 Remembrance Ceremony at the school’s flagpole, outside of the front entrance to the school.

The ceremony was at 11 a.m. Wednesday morning, and several teachers attended with their classes of students. They gathered to remember September 11, 2001 as well as the former students, firefighters, and police officers that devoted their lives to fighting for this country’s freedom.

In attendance at the ceremony was long-time Decatur resident and former company commander of the high school JROTC program, Jerry Eickhoff, who received the “DHS JROTC September 11 Service Award,” as well as Commissioner Tony Powers, who recognized the work of first responders and prompted students to model “service over self.”

In addition, Billingsley works with contractors who donated 1,600 flags for all of the students.

“As a former teacher and homeowner in Decatur, I was very proud of how DHS remembered 9/11 today,” Billingsley said.