Atlanta School Board decides not to extend superintendent’s contract

Atlanta School Board decides not to extend superintendent’s contract 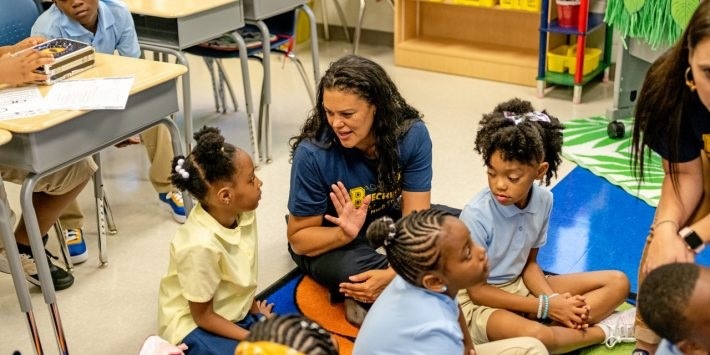 The Atlanta Board of Education won't renew Superintendent Meria Carstarphen's contract after it ends next year. CREDIT JOHNATHON KELSO / FOR WABE
Share

After three hours behind closed doors Monday, the Atlanta Board of Education decided not to extend Superintendent Meria Carstarphen’s contract when it ends June 30, 2020.

When the board hired Carstarphen in 2014, she signed a three-year contract, which is the maximum number of years allowed by state law. Since then, the board has given her three one-year extensions. The board met in executive session to see if it had the votes needed to offer Carstarphen an extension this time around. Board chair Jason Estevez said the votes weren’t there. As a result, the board didn’t take any action and will let the contract expire.

“The board acknowledges that there will be disagreement related to this decision, but we believe that it’s important for the good of the entire system to move forward now,” Estevez said afterward.

The board hired Carstarphen when the district was still recovering from a 2009 test cheating scandal. She implemented ambitious proposals, including a ‘turnaround plan’ for some low-performing schools. The plan drew fans and detractors. Some appreciated Carstarphen’s bold vision for the district. Others didn’t like that she hired charter operators to run some schools and closed some under-enrolled schools.

Estevez said the board appreciates the work Carstarphen has done so far, but it’s time for a change in leadership.

“For board members, it was an issue related to whether she was the right leader for this time in Atlanta Public Schools, and also believed that, given the deep division amongst board members and in the community, that we needed a superintendent who was going to be able to collaborate with the entire board,” he said.

However, parents like Brigitte Peck, challenged the board’s process.

“I feel like there’s a great erosion of trust now,” Peck said. “I hear you talking about being able to work together, but you’ve just made — not everyone — but a lot of people in the APS community question your process and your decision.”

Other parents, like Wakeisha Howe, said it’s time for the district to move on.

“We have paid this superintendent very well, only for her to give away our community schools to partners, who have let the children down,” Howe said. “Their schools are failing as well.”

Some political heavyweights have supported Carstarphen and urged the board to extend her tenure. They include Congressman John Lewis, former Atlanta Mayor Shirley Franklin, and former Georgia Gov. Roy Barnes. Other influential groups have said the district is better off finding new leadership.

“The brave Atlanta board members did the right thing today, and we applaud them by not caving into pressure by big companies and personalities who we all respect,” said Verdaillia Turner, president of the Atlanta Federation of Teachers.

Since Carstarphen took over, standardized test scores in APS have steadily improved. So have graduation rates. She’s spoken frankly about the district’s history and its administrative inefficiencies. After the vote, Carstarphen sent a letter to staff members, which read in part:

“As I have expressed for the past few months, I had a sincere desire for a contract extension so that our team and I could complete the vision and charge I was hired to achieve for the benefit of Atlanta’s children: Rebuild and restore trust in Atlanta Public Schools and position it for the future, especially after the largest cheating scandal in the history of public education.”

The board said it will share more details on its new superintendent search at its monthly meeting in October.

A note of disclosure: The Atlanta board of education holds WABE’s broadcast license.