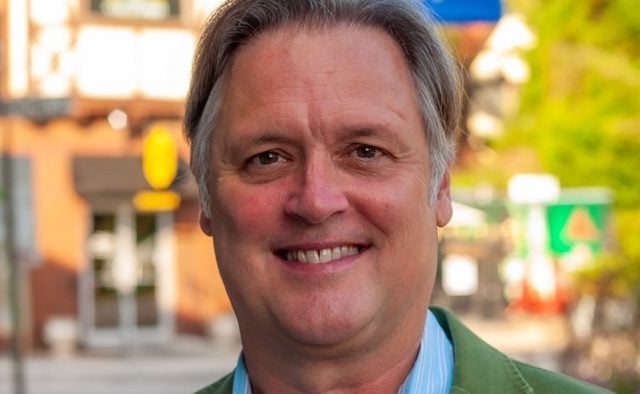 Avondale Estates Mayor Jonathan Elmore kicked off his re-election campaign Thursday night, emphasizing the steps he and the commissioners have taken to stabilize and improve city finances over the past four years and pledging to continue to work for “responsible growth for a sustainable future” in the city.

“We have some really great momentum here and we need to continue that,” Elmore told the gathering.

Elmore’s opponent is former city manager Clai Brown. He says he is running for mayor because the city is at a “turning point.”

“I am running for Mayor because our City needs a proven leader with working knowledge and expertise in running businesses and city government,” Brown said on his campaign website. “A leader who will ensure our residents and business owners have a voice in building the future of Avondale Estates.”

Since Elmore’s first election just over four years ago, the city has implemented its first strategic planning process, as well as a fiscal reserve policy requiring the city to maintain two months of operating expenses. He said it has also made great strides in developing its downtown business district and diversifying its tax base by recruiting more commercial and mixed use development in its downtown core.

“When I first took office, the city’s approach was more of a pay-as-you-go, do-it-yourself plan,” Elmore said. Any purchases or improvements had to be paid out of the current operating budget, with no long-term plan for financing large capital expenditures. “That is no longer sustainable.”

Like all cities in DeKalb, Avondale Estates is facing rising costs associated with maintaining and improving its infrastructure and providing required services to citizens. In 2010, DeKalb transferred responsibility for maintaining the stormwater drains and pipes inside incorporated cities to those city governments, Elmore said. In addition, money the city had received through the state Department of Transportation’s Local Area Road Assistance (LARP) program is now a tenth of what it once was. (Georgia DOT discontinued LARP in 2010 in favor of the Local Maintenance and Improvement Grant [LMIG] program.)

These and other demands on the city’s resources mean Avondale needs to increase its revenue, which it can do in three ways: raise taxes, annex property to collect more taxes, or improve the property it already has to increase its value.

The latter choice is the best one for Avondale, Elmore believes.

The recent Willis and Trammell Crow mixed-use developments are good examples of how the city can increase tax revenue and support a more vital downtown core, which, in turn, supports the commercial businesses there.

Correcting what he says is a common misunderstanding about tax breaks granted to The Willis, Elmore pointed out that the city is already collecting more property tax revenue on the property than before it was redeveloped.

According to information collected by the Downtown Development Authority, that property’s annual taxes were about $14,000. Last year, even with the tax breaks, the taxes collected were $58,000.

Many people believe that the city is giving money to the developer, he added. They are not. It is true that they are not collecting the total amount of tax that would normally be levied on the improved property, but because taxes are paid on the newer, higher property value, the city still comes out ahead.

And, Elmore seaid, the tax breaks gradually expire over a 10-year period, with 6 percent coming each year. Over 10 years, the city will receive approximately $2.8 million in property taxes from The Willis development. This is compared to approximately $142,000 it would have collected without it.

Elmore also pointed to the city’s new Urban Redevelopment Agency (URA) as one avenue for improving the city’s financial flexibility, since it can access funding mechanisms that the City Commission itself can’t.

One example is the issuance of a bond anticipation note (BAN), which acts like a line of credit allowing the agency to borrow up to $8 million dollars.

“We would not need to borrow the full amount, but to fund what we need to do, up to that amount,” Elmore said. “Then the city could issue bonds to repay the BAN. And, the BAN is only available to URAs.”

Over the next four years, Elmore said he would like to see the city pursue growth in the following ways:

– Continue plans for the development of its Town Green project on the property the DDA owns at the corner of N. Avondale and Oak Street;

– Implement a road diet on the section of U.S. 278/N. Avondale Road that is inside the city limits; Update its zoning ordinances to be consistent with its Downtown Master Plan and citywide Comprehensive Plan;

– Complete needed stormwater improvements along Kensington Road and the Northwoods rain garden project, as well as create a Stormwater Master Plan; and,

Avondale Estates has made significant progress over the last five years, with much of it due to the current mayor and board, said Jessica Neese, co-owner of In Bloom Landscaping, who attended the event.

“I support them 100 percent,” she said. “We just moved to the city of Avondale Estates about two years ago, but I lived just outside in unincorporated Avondale for 15 years and I have seen everything that has happened and the changes that have been made.”

The city has essentially made 20 years of progress in a very short amount of time, said physician J.T. Singh, another Avondale resident, which has led to a lot of strong reactions and fear among some long-term residents of the community.

“But we have to have more sustainable sources of revenue than just taxing these 1,200 houses,” Singh said at the meeting. “We want to build a city that is sustainable for our children and grandchildren.”

The Elmore for Avondale campaign has several more Meet and Greet events scheduled throughout September and October. Residents are encouraged to email [email protected] if they plan to attend.

Voter registration for the Nov. 5 municipal elections will end Oct. 7. Early voting will start on Oct. 14. To register to vote, click here.

In order to register you have to be a U.S. citizen, a legal resident of a Georgia county and at least 17 1/2 years old. You must be 18 years old to vote, according to the Secretary of State’s Office.