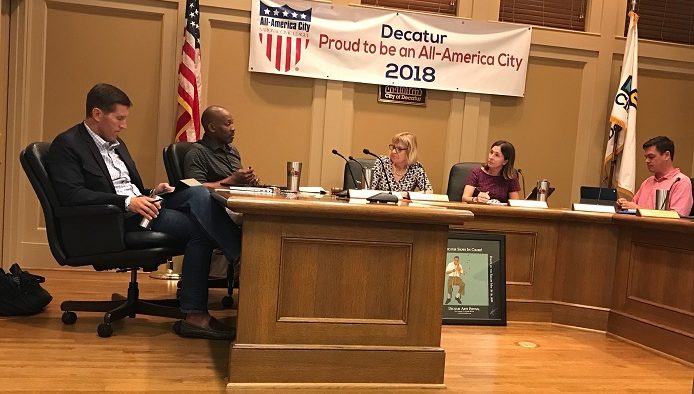 The Decatur City Commission at its Sept. 16 meeting adopted an ordinance regulating e-scooters within city limits.

The ordinance comes after e-scooters were deployed in the city in September 2018 without notice to city staff. The city and e-scooter company reached an interim agreement for using the scooters and have now adopted a city ordinance.

Some highlights of the ordinance include:

– Scooter riders must be 18 years or older.

– Bans riding on sidewalks or on streets with speed limits higher than 35 miles per hour.

– New parking regulations for e-scooters will be implemented. These regulations include requiring riders to park e-scooters in the “landscape zone” of a sidewalk — which is the buffer between the sidewalk and the curb line — next to public bicycle racks or in other areas specifically designated for bike and e-scooter parking. To see the full list of parking regulations, click here.

– Devices will be limited to 50 devices per company within a half-mile radius of 101 East Court Square, and 75 devices citywide.

– The scooter companies will be required to carry insurance.

– The companies will be required to provide certain data to the city about their products. Information the city can collect includes, “start-time, end-time, start location, end location, route information, vehicle ID, and total trip distance.” The e-scooter companies are also required to notify the city about any injuries to riders using their devices.

Some concerns mentioned at the meeting were rider behavior, the location of the scooters before and after each ride, as well as safety.

“I have also concerns about helmets and as a neurosurgeon, I’m a firm believer in wearing helmets, but I don’t know how this can be managed because people can’t put a helmet in their back pocket,” Vandiver said.

Nima Daivari, community affairs manager for Lime, also shared those same concerns and shared his story of surviving a crash in which he was dragged 63 feet while being trapped underneath a car.

He said he takes safety very seriously, but also said the issue should be looked at on a grander scale.

“Just on Friday, we had in Atlanta, a 14-year-old pedestrian who was hit by a car and killed as he was crossing the street to go to the bus stop to go to school,” he said. “The scooters are not the problem. The cars are the problem, the speed at which vehicles are moving, the lack of infrastructure we have, the lack of options we have for alternative modes of transportation for our cities. Scooters are working everywhere.”

Another concern was rider behavior. Ash Kumar, local government management fellow with the city of Decatur, said the police department would be trained to understand the new ordinance, what any penalties may be and what they would need to look for or take care of.

The hope is that the scooters with be feeders to other forms of public transportation, as Decatur has three MARTA stations.

“The MARTA station and other locations from where a trip might start or end is where we are seeing the maximum number of devices deployed every morning,” Kumar said.

But this could cause an imbalance in the placement of the scooters, leaving many at the bus stations.

“According to the agreement and the ordinance, the company is required to reset the devices every 24 hours and to check the functionality of them,” Kumar said.