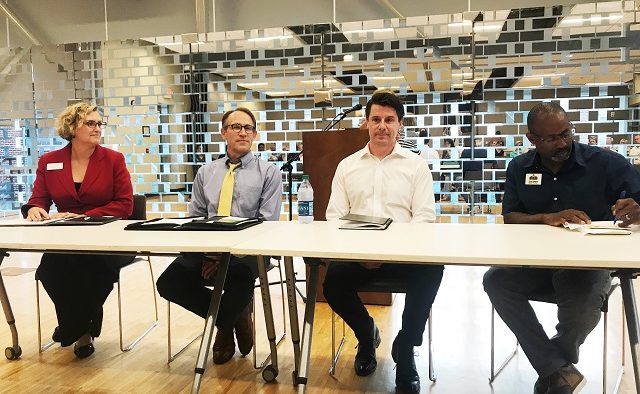 (From left to right) City commission candidates Erin Braden and George Dusenbury, running for District 1, Post B, and Christopher Gagnon and Tony Powers, running for City Commission At-large, sit at the front of the room, preparing to introduce themselves before a forum on Sept. 11 at the Decatur Recreation Center. Photo by Duo-Wei Yang
Share

The four candidates each had three minutes to make introductory statements.

Both Braden and Powers have worked in various Decatur advisory boards and associations. Powers is the incumbent at-large City Commissioner.

Dusenbury previously worked for Rep. John Lewis in Atlanta and D.C. and Gagnon works as an executive for commercial insurance brokers.

Following introductions, audience members shared their concerns and questions with the candidates.

Murphy asked if the candidates shared the city’s tree advocates’ concerns for Decatur’s tree canopy and how they would preserve it.

“I believe we have been working on that with various groups,” she said. “I feel confident that with that many people and more everyday speaking up, we will be able to make a difference.”

“Atlanta has one of the strongest tree ordinances in the country, so we should look towards Atlanta as far as sorts of things we can learn in our own backyard,” he said.

Dusenbury also believes that solutions beyond tree ordinances should be considered.

“I think we need to aggressively go out there and plant trees,” he said. “We need to create incentives for homeowners to plant trees in their property.”

Gagnon says he’d like to support the other candidates views, but “needs to do more research to fully understand”.

“I’d like to see a little more data,” he said. “I don’t know how many trees we have — I don’t think the city keeps an inventory.”

A big theme Gagnon emphasized was the need for more data.

“We need to use that data to make decisions,” he said.

As an incumbent city commissioner, Powers called attention to previous and ongoing efforts to preserve the city’s trees. However, he also stressed that further improvements were needed.

“We can actively be better,” Powers said. “We can do better. We need to protect one of these great magnificent resources.”

The discussion then shifted to each candidate’s position on the DeKalb County Ethics Act, especially the proposed revision on the Board of Ethics.

The act, which will be on the Nov. 5 ballot for all county residents, proposes an overhaul of the county’s ethics board that critics say will make the board less effective.

“I think these are the efforts of those that seek lesser transparency with our county government than more transparency,” Powers said. “I support the [the current ethics board]. We’ll have to see what happens from there.”

Gagnon was “all about transparency,” citing his concern on the “trickle-down effect from Washington.”

“Things have deteriorated and it’s trickling down to the states, the counties, and sometimes the municipal level,” Gagnon said. “I’m not thrilled with anything that guts what we have or dilutes it in any way.”

Dusenbury succinctly stated his disapproval of the current ethics bill.

“I don’t think it’s strong enough. There was a strong bill and unfortunately it longer meets that criteria,” he said.

Braden currently doesn’t have a position on the bill.

“I’m looking into it,” she said. “I would support the strongest ethics bill for our county.”

Rather than a specific concern, audience member Mark Arnold wanted to know how the candidates would “manage all these competing interests.”

For Dusenbury, it depends on the issue.

“If the government’s not good at something, it’s probably something we shouldn’t be doing and we need to find a way to allocate our resources or find some non-profit or someone else to partner with to get things done,” he said.

To Gagnon, it all starts from the basics — infrastructure.

Gagnon also cautioned against some of the growth in Decatur.

Decatur is financially prepared to handle any emergency, Powers says.

“We operate at a 20 to 30 percent fund balance. That is something that is a die-hard core principle of your government,” he said. “We have opportunities because we have fund balance.”

Braden agreed with Powers, adding that engaging the whole community was necessary when figuring out what the city’s priorities were.

“It’s important that we reach out to populations across the city,” she said. “We’re going to need to build partnerships and collaborate with county, state, non-profit, et cetera.”

Twelve-year resident Charlie Slater brought up an issue being felt more and more in the community — Decatur’s capacity.

“It seems like everywhere I walk in the downtown area, I’m seeing apartments being built,” he said. “I gotta believe that these people have cars and a lot of them have school-aged children. To my knowledge, Decatur High is at a maximum and I’m not sure if there’s any room for expansion.”

Powers agreed, but noted that there was some management of the issue.

“We really look at trying to limit the number of three-bedroom apartments which cuts down that capacity for a family,” he said.

Gagnon agreed with Slater, citing some of his own observations.

“No one rides their bicycle down the bicycle lane, which is weed-infested and covered with dirt from the planters,” he said.

Gagnon emphasized the need for data and independent expertise to combat the complexities of the issue.

“I’ve been asking since the planters went on West Howard for an impact study that was performed on the traffic on that road. Never seen one. I don’t believe it exists,” he said.

To Dusenbury, creating a clear-cut plan was essential.

“Where are the parks and green spaces going to be? How are we integrating transportation and parking into this?” he said. “Let’s have an honest comprehensive conversation on what it looks like.”

Braden agreed and said the apartments have some benefits to them.

“Our apartment buildings actually support our schools.They bring in a much higher tax revenue than is used because the proportion of students in our apartments are very low when you look at the actual data,” she said. “There’s not a direct correlation and overcrowded schools.”

The last issue of the evening was diversity — how to keep minority populations within the city.

“There’s a lot of policies mechanisms that we can use to incentivize [affordable housing],” she said.

Dusenbury believes that there needs to be a closer look at the existing information and data on the issue.

“If we are serious about not pushing people off by raising their taxes… we need to have a hard look at what’s driving those financial decisions,” he said.

“We can choose to compensate people differently so they can afford to live here,” he said. “We can and should control what it costs to live here to the degree that we can. And when we say we’re committed to some percentage of new development being affordable, we need to define very strictly what that means.”

Powers reiterated some of Gagnon’s points in his statement, citing previously enacted policies.

“In 2016, we did a fee waiver for all seniors for their sanitation fees and their water fees. While these are small sums, they add up,” he said.

Following this discussion, the forum closed out with two minute closing statements from each candidate. Elections for city commissioners will be held on Nov. 5.

Voter registration for the Nov. 5 municipal elections will end Oct. 7. Early voting will start on Oct. 14. To register to vote, click here.

In order to register you have to be a U.S. citizen, a legal resident of a Georgia county and at least 17 1/2 years old. You must be 18 years old to vote, according to the Secretary of State’s Office.