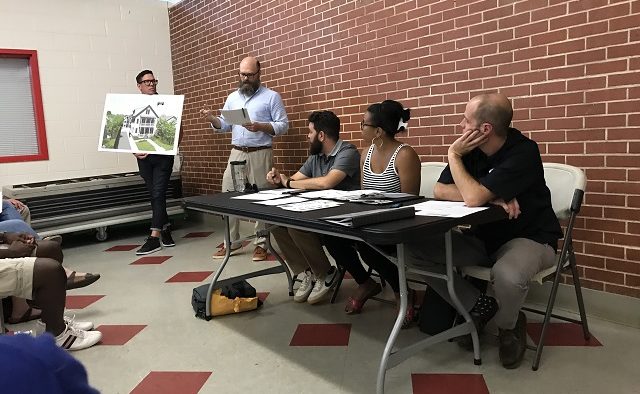 Neighborhood Planning Units are advisory boards made up of residents who make recommendations to the Atlanta City Council. The jurisdiction of NPU-O includes Kirkwood, Edgewood and East Lake.

The NPU-O rejected two applications to build two multi-family multi-unit (MR-MU) properties with 12 units each on Whitefoord Avenue Northeast and Mayson Avenue Northeast. These properties would include units of “missing middle housing.” Jonathan Rich, of Keller Knapp Reality and Eric Kronberg of Kronberg Wall Architects are involved in both projects.

According to Curbed Atlanta, missing middle housing is defined as housing in between single-family homes and apartments.

NPU-O Chair Marcus Owens said the denial was driven primarily by people who felt the projects were “out of character” for the neighborhood and he said the proposed projects were “heavily opposed” by people living next to them.

Residents in attendance cited reasons such as the height of the buildings. Another resident raised concerns about setting the precedent for other large structures to be built in the neighborhoods.

Rich said the intent of the MR-MU zoning is to give developers a more inclusive housing tool, because currently developers have two tools— single-family and multi-family development.

“The tools that developers have, residential real estate, that are not subsidized are to create what we would say are more exclusive housing options,” Rich said. “The new housing options are only for the people in the upper middle class and above. The reason is because the dirt’s expensive and development’s expensive.”

“It’s to provide more housing choices more options and eventually for the market to absorb how elevated the price point of the two options we have available are going to continue to be,” Rich added.

Each property would have a front building and pull-under parking with a second building above. The proposed projects each have 12 units with 18 beds. and two units will be workforce housing.

The workforce housing units will have a restriction based on income for those who rent them, and they will be given a discount on rent, Rich said in an interview.

“That means it’s housing that are rental rates restrictive through the program for nobody making more than $41,000,” Kronberg added.

One concern raised about the projects was their density and whether that could be lowered.

“The density could be lower, but we couldn’t provide the workforce housing and make that function,” Kronberg said. “We have resisted to reduce the density because we don’t know how to make the math work and provide workforce housing. That’s why we’re continuing to ask for 12 units.”

Each property is also in proximity to a MARTA station. In January, the city eased parking requirements in all zoning districts if a property is within half a mile of high transit.

Rich said the idea behind that is to put as much density around MARTA stations as possible to potentially get people to stop using their cars. He said the only way for people to do so is to be able to walk to work or take a train.

In other business, the NPU-O also did not approve an ordinance that would prohibit the use of single-family homes as a “party house” in residential districts, the ordinance overview states. All units zoned R-1 through R-5 would be prohibited to be used as a party house.

Party house is defined as “a single-family, two-family, or multi-family dwelling unit, including all accessory structures and the dwelling unit’s curtilage, which is used for the purpose of hosting a commercial event,” the overview says.

Commercial events include parties, ceremonies, receptions or similar large-scale gatherings where a fee is charged for the use of the dwelling unit.

“So, people are operating single-family residential houses, essentially as an event facility and then what this legislation is attempting to do will prohibit it in your R districts as well as I-1 and I-2. Then only allow it in certain districts by special administrative permit or a special use permit,” City Planner Racquel Jackson said.

The ordinance is intended to prohibit those who rent out their property for events.

Facilities such as daycares and spaces like the Bessie Branham Recreation Center are not included in the new ordinance.

“It’s either going to be an event facility permitted by a special use permit or a party house. If it’s classified as an event facility, this does not have any bearing on what is currently there,” Jackson said.

Residents in attendance stated that the ordinance was unnecessarily restrictive when there are currently laws in place regarding parties, such as a noise ordinances. Residents also did not think the issue was not of big concern in the area.