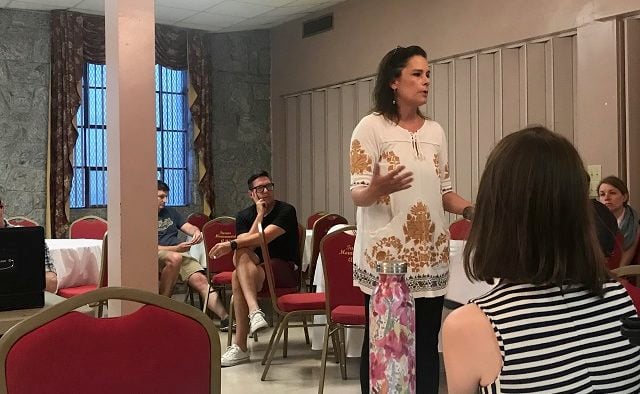 The Kirkwood Neighbors’ Organization met Tuesday evening, Sept. 10 to discuss plans for Coan Park and address questions regarding the recent news of Superintendent Meria Carstarphen’s contract not being renewed by the Atlanta Board of Education.

Atlanta Board of Education member Michelle Olympiadis spoke about the decision of the board and answered questions from residents in attendance. Olympiadis was against renewing Carstarphen’s contract.

People wanted to know why a public relations firm was hired to handle the public reaction to the board’s decision not to renew. They also wanted to know if there were any budgetary reasons for not renewing the contract and had questions about selecting a new superintendent.

Olympiadis clarified that the School Board did not hire the public relations firm. She said the legal counsel for the school district, Nelson Mullins, hired the firm so board members could put together a statement about the announcement.

However, the firm is not assisting individual board members with their individual statements.

“We have a pretty large budget that should be [allocating] its dollars to, like I said, help the kids who need it the most,” Olympiadis said.

One parent spoke about how she and others were happy with the direction APS is going and said one thing parents craved was stability in APS. She asked if they can do better than Carstarphen and raised concerns about a new superintendent having to learn the role.

“Systemically, I don’t think that the board wants to move in a different direction,” Olympiadis said. “I personally am very pleased with the cluster model setup with the signature themes within the clusters. I’m very excited that we have a student-based funding formula. I just would like to see us not back into a $4,400 base per child when we’re getting $15,000 from the state.”

In a follow up interview, she said, “So, my question is, how did we get down to that number? What’s going on with the two-thirds plus that’s missing? How are we following that from the past to the forward so that we can ensure that we’re getting as much money as we can in our school houses to support our children, for the children that need us the most?”

Parents also raised concerns over how the board will or can make sure the new superintendent will not make major changes.

Olympiadis’ concerns about the superintendent are grounded in fiscal responsibility and academic outcomes.

“For me, with respect to this school district and the resources that we receive given our challenges, of course our first priority is academics, but academics that’s rooted in a financially sound plan that’s making sense,” Olympiadis said.

One Kirkwood resident Betsy Collins said Olympiadis has been straightforward with her constituents.

“Every time I’ve talked to her about her interests and in terms of what she envisioned for APS and for the superintendent, she has been very straightforward with me in terms of saying, ‘Listen, I want to know where the money is going and no one’s telling me,’” Collins said. “I would also like to add, Toomer [Elementary] is not the worst school. There are other kids that are missing this money, even more than our kids.”

In other news from the KNO meeting:

– Julie Straw, chair of Friends of Coan Park, is continuing efforts to revitalize Coan Music Park and asked KNO to commit to donating $10,000 that Park Pride will match in 2020.

“We have a grant and opportunity for additional investment to revitalize the park into a Coan Music Park. This is primarily focused on the two acres behind the tennis courts,” Straw said.

The scope of the project is the installation of nature-inspired instruments, an archway and mosaic steps leading to that area of the park. The hope is to make the area more inviting to foot traffic, Straw said.

Straw also addressed safety concerns about a rotting deck and said some upkeep has been done on that deck to ensure it is safe for the community.

– Sgt. Jarius Daughtery gave an update from the Atlanta Police Department. The department is still working on their “See Something, Say Something” campaign. He encouraged residents with any type of security camera to report crimes or provide any information on crimes that have happened in the area.

Daughtery said the No. 1 crime in the Kirkwood area is theft from vehicles.

He also encouraged residents to utilize Atlanta 311 to connect with services when a tree is down, or a wire is hanging low or other situations of that nature.

“Stuff that a lot of times people will call 911 for and kind of clogs up our ability to respond to more pertinent things in a timely fashion,” Daughtery said.

KNO is working to schedule an additional meeting with Olympiadis for those who have more questions. Details are still to be determined. The next regularly scheduled KNO meeting is at 7 p.m. on October 10 at Turner Monumental AME Church.