Tucker’s HearthSide senior community speaks out against proposed drive thru

Tucker’s HearthSide senior community speaks out against proposed drive thru 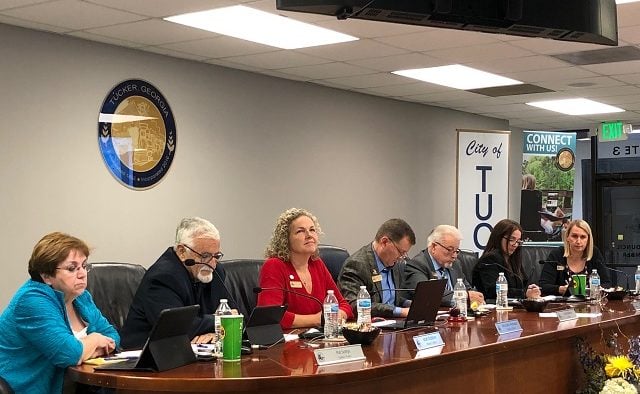 For months, Tucker residents and city officials have gone round and round over the commercial development of 4260 and 4270 Lawrenceville Highway at the corner of Lynburn Drive.

The proposed 11,000 square foot commercial property is steps away from the entrance of senior community HearthSide Club in Tucker. Retail occupants of the property have yet to be announced; Arby’s is planning to build out a drive-thru on one end of the building.

Lack of pedestrian safety and increasingly dangerous traffic flow spurred the senior community of HearthSide to come out against development on its street.

During the Tucker City Council’s Sept. 23 meeting, the there was a first reading of special ordinance to add the drive-thru restaurant.

A petition to stop the Arby’s drive-thru was presented to City Council members backed by 25 HearthSide residents, all donning red ribbons. The petition has 105 signatures.

Jim Mahaffey, HearthSide resident and retired educator, said he witnessed a horrific car accident at the intersection in 2018 when two 14-year-old girls were hit by a cement truck.

“It is a corner waiting for more of us seniors to cross and meet death,” he said.

According to the Centers for Disease Control, pedestrians ages 65 and older accounted for 20 percent of all pedestrian deaths in 2016.

John McHenry, community and economic development director, said the city’s Community Council is concerned “a drive-through restaurant did not meet the downtown character area adopted in our 2016 Comprehensive Plan.”

McHenry suggested the use of landscaping to beautify the property and screen the drive-thru, and a 10 p.m. closure of the drive-thru lane. He asked that the drive-thru not be transferred to another business without approval of city council.

City Councilmember Anne Lerner said development would be headed to that area of town, even if Arby’s doesn’t pan out.

“Arby’s or no Arby’s, I’ll state it again, commercial is coming there,” she said.

Mayor Frank Auman added, “We had somebody a few weeks ago say they didn’t like the Arby’s because the food is not healthy enough. OK. We may or not agree, but that’s not a basis for a zoning decision.”

The mayor did not specify a date for the second read of the ordinance for the drive-thru.

E-scooters were another hot topic at the meeting on Tuesday. Next month city council will hear a second read of an ordinance to limit the use of scooters in Tucker.

Lerner said if the city of Atlanta does not have the infrastructure to address scooters, Tucker doesn’t either. “We are not ready or capable of handling these right now. Until we are really ready with bike paths and more infrastructure, we can take it up again.”

Charles DeWitt is Tandem Bank’s CEO, and Mayor Auman noted his involvement with the company.

“Full disclosure: I’m an investor,” Auman said. “It’s good for Tucker in the business community and the wider community.”

According to the state Department of Banking and Finance, Tandem is “the first traditional de novo community bank charter in Georgia since 2008.”

Here is the full May 2 announcement about Tandem Bank from the state Department of Banking and Finance:

Atlanta, Georgia – The Department of Banking and Finance, State of Georgia (“Department”) approved the first traditional de novo community bank charter in Georgia since 2008. Tandem Bank, In Organization (“I.O.”) is anticipated to primarily serve customers in Tucker and the surrounding metro-Atlanta region.  Governor Brian P. Kemp stated that: “Tandem Bank’s announcement is very exciting and a testament to the strength of Georgia’s economy.  I look forward to Tandem’s contribution to the Tucker community and our great State.”

Over the last 11 years the number of state bank charters in Georgia have declined, largely due to bank closures during the Great Recession and subsequent industry consolidation without any new de novo bank entries.

Upon approval of the charter, Commissioner Kevin Hagler noted that: “The formation of this new state bank is further evidence that community banking in Georgia has recovered from the depths of the financial crisis.   Community banks serve local economies by tailoring loans and financial services around customers within a limited geographic market.  This is evident by the fact that state-chartered banks provide approximately 66 percent of the banking industry’s loans to farms and approximately 50 percent of the banking industry’s small loans to businesses. The continued issuance of charters to locally owned and managed financial institutions is key to maintaining a vibrant and diverse economy throughout the rural, urban, and suburban areas of this State as it will ensure ample credit opportunities are available to Georgia businesses and consumers.”