The Avondale Estates City Commission held a work session on Oct. 23 to discuss a memorandum of understanding with Fabric Developers, the 2019 budget amendment and the capital plan.

The city wants to develop five acres owned by the city and the Downtown Development Authority along North Avondale Road. Projects include a town green.

The memorandum of understanding will act as a nonbinding document between the city, the Urban Redevelopment Agency, the Downtown Development Authority and Fabric Developers prior to an approved development agreement. It includes the Town Green design, development and construction process.

The Bleakly Advisory Group consulting firm represented the city during negotiations with Fabric Developers to reach an agreement on the MOU.

The MOU is an agreement for six months. All parties will work together to figure out the details. Jonathan Gelber, vice president of Bleakly Advisory Group, said that after six months the parties could stop working together, ask for an extension or continue to the next step of the process.

Gelber used the analogy of dating, getting engaged and then getting married to describe the process. Right now, the city agencies and Fabric are working toward engagement.

“To put it in real casual terms, what we’ve been doing up to this point is dating and flirting. Once this document gets signed it’s like an engagement, and we say we both agree we want the same things in life and we’re going to move forward. It is at the point of a development agreement which ideally would be roughly six months from now, then that’s a marriage,” Gelber said.

Some concerns raised by the public were about who would design the park. Under the MOU, Fabric Developers would supervise and spearhead construction of the commercial portion of the project and the Town Green development, City Manager Patrick Bryant said.

Another concern raised by the audience and board members were the timelines laid out in the document.

Commissioner Brian Fisher said that some of the turnaround times were pretty quick for government to be able to digest a document, get it out to the public and have a meeting.

For example, the MOU says the Fabric Developers will provide the URA a written offer of compensation in which Fabric will pay the URA or DDA for the land of the Town Green Mixed Used element of the project. The URA must then coordinate with the city and the DDA and respond to the offer within 30 days.

Deputy City Manager Paul Hanebuth gave a presentation to the board on the capital improvement plan for 2019 through 2022.

The stormwater fund is comprised of the stormwater project priority plan, the Kensington detention pond, North Woods erosion control and other prioritized projects.

The city has a two-year storm water action plan with a timeline of construction. Work on the Kensington detention pond is planned to begin in November and stormwater priority plan development may begin in December. Other projects are anticipated to begin in March 2020 throughout the remainder of the year. 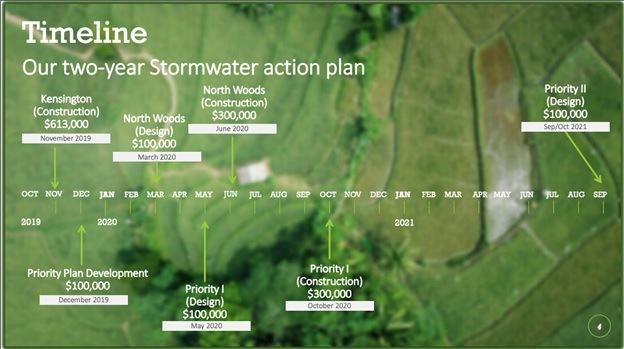 Image obtained via the city of Avondale Estates

The three-year restricted funds action plan would provide police vehicles throughout the next three years. It also includes funds for the Road Diet, street grid and minor road patching.

The timeline of the two-year assigned funds action plan begins in Nov. 2019 with new sanitation collection vehicles to increase efficiency and working conditions.

Hanebuth explained that currently sanitation workers walk the length of the city during the week to collect trash in 95 gallon containers that they leave on the curb for the trucks to pick up. But the new vehicles would include an arm that picks up trash and puts it in the truck, reducing the amount of walking for the sanitation workers.

“The advantage of these vehicles would be several fold. It would increase efficiency because they’d be able to move faster through the route. They will collect garbage in the bins and be able to go and find the garbage truck and empty them once the bins got full and then continue on the route,” Hanebuth said.

Other projects include the Town Green design and construction, obtaining a skid steer loader and the Street Grid R.O.W. project. 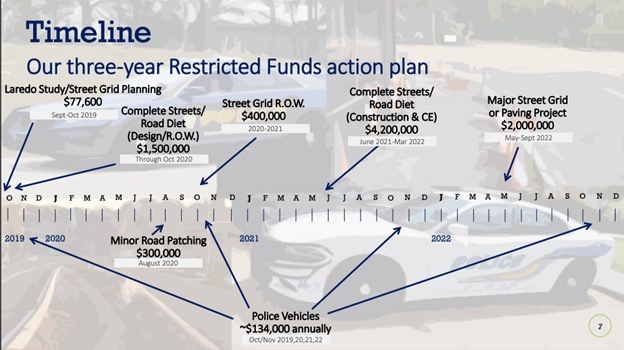 Image obtained via the city of Avondale Estates

The BOMC also discussed an intergovernmental agreement with the DDA for the Community Promotion Program. The CPP is funded by the city but is overseen by the DDA. The goal of the program is to promote the city through events and other activities that attract people to Avondale Estates.

Bryant said the staffs of the DDA and the city are working to create a master intergovernmental agreement between the entities since there will be other opportunities in the future for them to enter into agreements. The master agreement allows for specific future agreements to be added as an addendum.

The board will vote on the agreement on Monday.

The second reading of the 2019 budget amendment and the first reading of the 2020 draft budget will be on Monday. The board will also vote on the Georgia Municipal Association ethics recertification. Avondale Estates is a GMA certified city of ethics and the city’s participation must be renewed every four years.