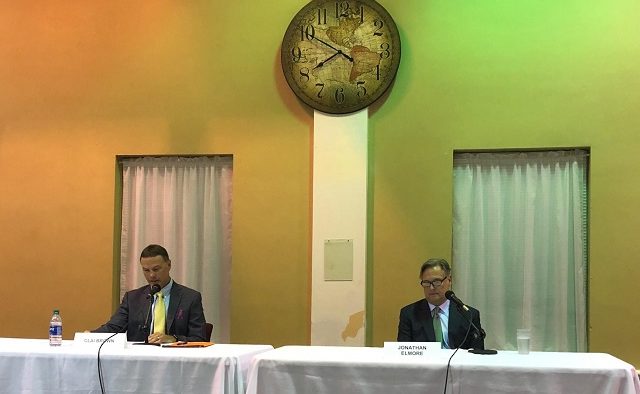 Brown’s statement was misleading, Avondale’s city manager says. While tax collections for the city have increased, records show that Avondale Estates’ millage rate is lower than it was in 2015 when Elmore was elected mayor.

Brown also avoided directly answering questions about whether he would’ve voted to approve an employment contract amendment which awarded him a hefty severance for resigning his job as City Manager and lowered his retirement age to 55.

The mayoral candidates squared off on Monday, Oct. 7 at the First Baptist Church. More than 200 people attended, and Judge Steve Nicholas served as moderator. The audience was split between supporters of both candidates.

In his closing remarks, Brown made a claim about taxes that requires further examination.

He said, “Under Jonathan’s watch, he has raised taxes every [year] he’s been in the city.”

Because the comments were made during the closing remarks, Elmore was not able to rebut Brown’s statements and could only roll his eyes and shake his head.

Brown was referencing increased property taxes collected by the City of Avondale Estates. The city says the increase is due to rising property values in the city.

Elmore explained after the meeting that he approved lower millage rates and the commission has no control over the tax assessor calculating higher property values on residents. Increased property values mean higher taxes for all residents of DeKalb County, not just Avondale Estates.

“The Board of Commissioners and Mayor voted to decrease the millage rate twice, so it has been flat, the same, or decreased,” Bryant said. “The statement made by Mr. Brown is incorrect and misleading.” Image provided by the city of Avondale Estates.

Two audience members asked Brown a direct question about his employment contract that he avoided answering. They wanted to know if Brown were mayor in 2015 if he would have voted to approve the contract amendment.

The contract stipulated hefty benefits even if Brown was fired or resigned. To the dismay of some in the audience, Brown said, “the majority of the board voted on that contract and the Board of Commissioners and Mayor are the bosses of the city manager.”

But he never said yes or no to whether he would approve that same contract today.

Elmore, the current mayor, said he would not approve the contract and “none of us [new members on the City Commission] knew about it,” which drew jeers from Brown’s supporters in the audience.

The forum touched on many other topics.

Brown said that the city spends too much on consultants.

Prior to becoming Avondale’s City Manager in 2007, Brown worked his way up through the ranks at Home Depot.

In defense of using consultants, City Manager Bryant said, “the city has a small staff. For instance, we do not have an engineer on staff. Our development projects require engineering plans. We need outside experts for growth and these professional services are proportional to the amount of projects.”

Development was another topic at the forum.

In reference to the Trammell Crow Project mixed-use development on Maple Street and East College Avenue, Elmore said he would “vote yes again” but wants zoning regulations that are clear and predictable.

“Right now, everything falls on our lap in the form of developer agreement and it should really be a zoning decision,” Elmore said.

He said when Trammell Crow changed the design plans and the public saw it for the first time, the City Commission “should have taken pause, [and waited] two weeks or three weeks.”

Elmore said that while $600,000 was budgeted for improvements under Brown’s time as City Manager, the actual project was estimated to cost $1.2 million, which is not feasible.

He wanted to bring the starting pay up from $12/hr to $15/hr. Elmore said that the city allocated $50,000 to bring the Public Works building up to code and that the Carl Vinson Institute at the University of Georgia is doing a Compensation and Classification Study for employees.

“If we raise everyone to $15 an hour, the person making $12.50 an hour is happy but the person making $13.50 may not feel their raise is equal,” Hanebuth said. “Besides discrimination issues, there are also position classifications to consider in their compensation.”

The audience asked about adding police officers to the force as the population of the city increases due to apartment developments.

Elmore said the city wanted to “see what happened … and as it turns out the new apartments have security and no appreciable rise in crime there, so we have not seen any need for more officers.”

Brown was adamant about adding the officers.

“The Chief of Police is stating that we need two more police officers and then the board takes it out of the budget,” Brown said.

Avondale Estates Police Chief Lynn Thomas confirmed that the he had requested the additional officers when Ken Turner was interim city manager.

“We later came to a mutual decision to defer increasing staff levels until a time when the organization was able to determine whether we were offering competitive compensation packages to all existing employees throughout the organization,” Thomas said. “That approach makes sense to me, so I’m happy to defer a decision on new personnel until after that process is complete.”

Thomas also confirmed Elmore’s statement that the crime statistics currently do not support the need for additional police officers.

Thomas said even though current crime statistics don’t support the need for additional officers, he is trying to think ahead about the officers the city may need as more people move to Avondale.

During the forum, Brown said that the $90,000 increase for new executive positions in city government should be spent on police officers. But the increase in executive position costs is from the overlap of employees and benefits paid, according to Bryant and Hanebuth.

Annexation was another hot topic. Both candidates are for annexation with proper studies and responsible growth plans.

In closing statements, both candidates said they loved the community and the history of Avondale Estates.

Elmore, an architect by trade, stressed that before he ran for mayor, he saw the potential in the downtown area and promised responsible growth.

“I have done exactly what I said I was going to do,” Elmore said. “I never lied to you. I have never hidden anything from you.”

Brown said he is better equipped to lead the city.

“What and who is most qualified to lead the city for the next four years,” he said.

Editor’s note: This story has been updated to clarify that while tax collections by the city have increased, the property tax millage rate has decreased since 2014.

Learn more about voting in the Nov. 5 elections:

Voter registration for the Nov. 5 municipal elections ended on Oct. 7. Early voting will start on Oct. 14.

If you have registered and need your polling information, visit the Georgia Secretary of State’s My Voter page by clicking here.