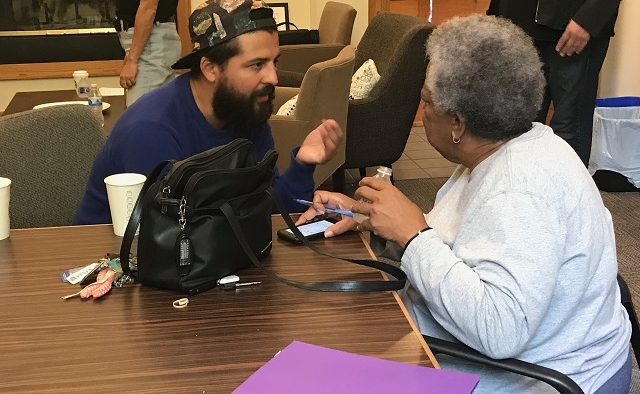 Living Walls and MARTA Artbound are working together with artist Nicolás Romero Escalada to paint two murals on the East Lake MARTA station. Over the weekend, both groups and Escalada held events to hear from community members about they think represents their community, as well as people and places Romero should visit.

Change and history dominated the conversation as those in attendance on Saturday talked about historical figures from the area like Hosea Williams.

Anton Flores, a Friend in Residence at the Atlanta Friends Meeting, mentioned that the station is on a continental divide.

Cookye Maddox, former resident of Kirkwood, also discussed that Hosea Williams raised his family in East Lake. Williams was a former aide to Martin Luther King Jr. and was a leader of the Civil Rights movement.

Maddox also recounted memories of growing up during the time of the African War when Atlanta saw an influx of African immigrants. She suggested including images of this time in the mural and using clothing such as the dashiki.

Long-time residents such as Janet Weeks, who has lived in East Lake for 33 years, remembered the East Lake MARTA station parking as an important place when her children were growing up.

“They both learned to ride their bicycles there and then they learned how to drive their cars there,” Weeks said.

She also shared memories of her children playing with the neighbors and putting a door in the stucco wall between her house and the home of Cindy Mullenix so the children wouldn’t climb over the wall.

This highlighted the unique aspect of the area around the MARTA station as a residential area, compared to the north-south line that goes into downtown Atlanta. The station serves Kirkwood, Oakhurst, historic Druid Hills and Lenox Place.

Escalada’s goal is to paint a mural that represents the communities and the people who use the MARTA station. He is conducting anthropological research to learn more about East Lake and what should be represented in the mural.

“I’ve been talking with the neighbors for a week of East Lake. Just to talk to them to see what their ideas of East Lake are,” Escalada said. “I already had a concept of transition because everybody in the community is saying that this place has changed. I think that’s something I really want to put and talk about, all of this transition, but I have to find a way to show that transition.”

This approach is different for Escalada. He is from Argentina and there people know everyone and are close with their neighbors, so he doesn’t have to do as much research because the information is easier to find.

“That’s the reason I think this engagement with the community is really important to see what they are thinking about, how this place used to be and how I can find elements that can communicate that. It’s going to be a lot of fun,” Escalada said. “I’m pushing my boundaries to see what I’m going to find.”

He is set to begin painting the week of Nov. 10 at the East Lake MARTA station. He will paint two walls – the wall on W Howard Avenue with the MARTA sign and the wall in the parking lot facing Paden Circle.