A mom at Winnona Park Elementary panicked on Oct. 21 when she showed up to school and 5-year-old son was nowhere to be found.

According to 11 Alive, the mom — Kenyetta Obie — later learned that her son had inadvertently boarded a bus to an after-school program.

She told the news station that she didn’t feel school officials moved with enough urgency to locate her son, a process that took more than an hour. Obie said she won’t return to Winnona Park.

“I don’t feel like it was an emergency for them,” she told 11 Alive. “The doors were still wide open when they were looking for him. The school day was still going on as if it was a normal day. My fear is just dropping him off and his safety isn’t being assured.”

City Schools of Decatur sent a letter to all after school transportation providers following the incident, but so far hasn’t notified parents about what happened. Decaturish obtained a copy of a letter, which says providers are responsible for making sure the students who get on the bus are the ones who are actually supposed to be there and said they need to adopt processes that don’t hold up the school dismissal process “unnecessarily or unreasonably.” 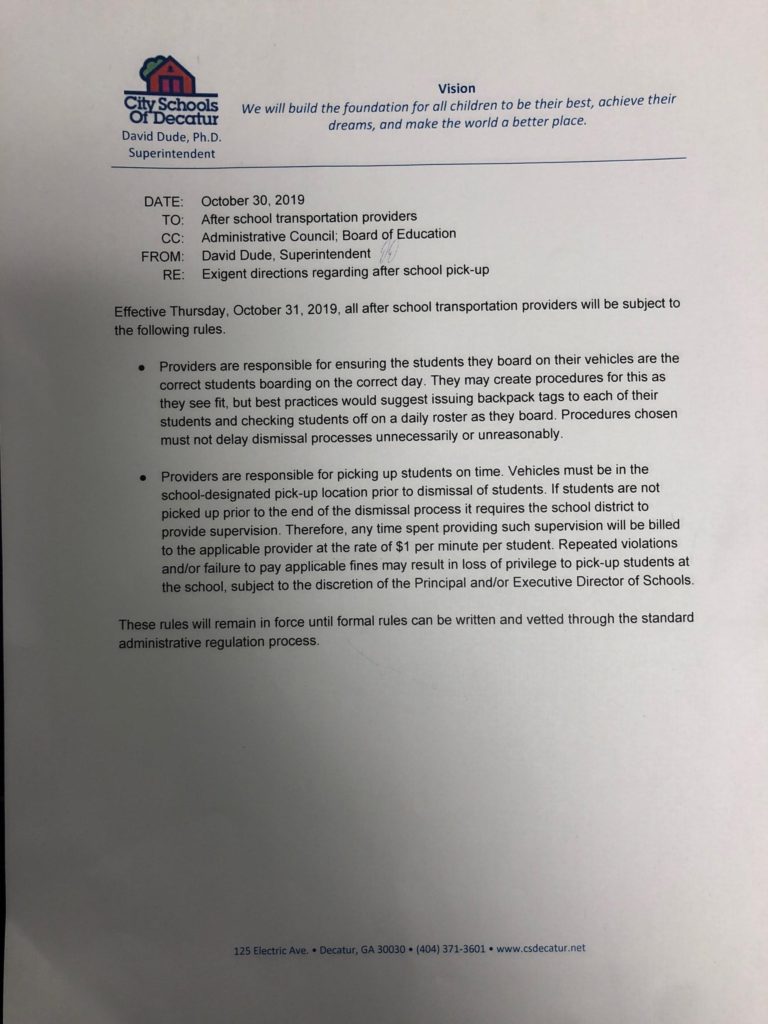 If after school transportation providers don’t arrive to pick up students on time, they will be fined, the school system’s letter says. The fines are $1 per minute per student being supervised while waiting for their ride. Repeat violators may lose the privilege to pick up students at Decatur schools.

CSD officials weren’t immediately available to answer questions, but did forward a copy of a statement sent to 11 Alive about the incident.

“On Oct. 21, during dismissal, a Winnona Park Elementary student regularly picked up as a car rider got on an after-school provider’s bus,” CSD’s statement says. “The provider then drove away from the school without verifying that the student was a registered attendee of this program. The school is reviewing internal dismissal protocols to determine what happened and how this can be avoided in the future. The school has also spoken to the after-school provider about improving their processes and implementing daily roster verification.”