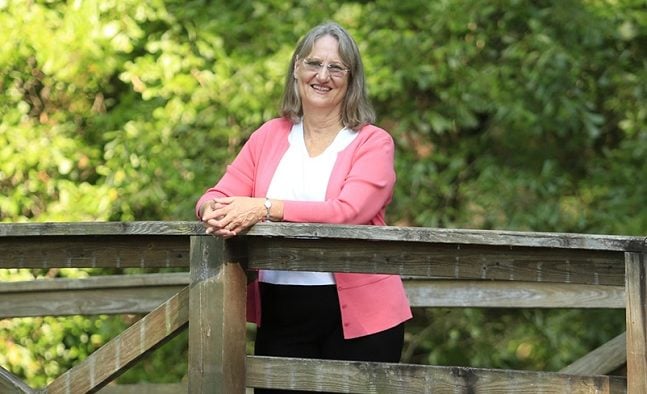 About this series: As part of our ongoing election coverage, we invited each candidate to submit up to three letters of support. Here are letters in support of Dee Merriam for Avondale Estates City Commission.

I’m writing to those of you who don’t know Dee Merriam. Those of you who already know her can move on, you know she deserves your vote and I’m jealous.

Jealous because I only recently got to know Dee. My wife, Jen, has known her for a few years, working together on the Green Space Committee in Avondale Estates and through various meetings that they both attended and typically talked about afterward. Jen was enthusiastic about Dee’s candidacy and told me I needed to meet her. So I did last month and Dee spent half an hour talking with me – not at me – about our backgrounds, our concerns, and what is important for our community. I left that get together thinking to myself, “Wow, Fred, now there is someone who not only wants to put herself out there and face criticism and conflict as a representative of the people, but she’s been doing that for us for years and years and knows what she is talking about.”

Dee has been a part of the – still volunteer and unpaid – Avondale’s Planning and Zoning Board since late 2018, and has been a regular attendee off BOMC and Downtown Development Authority meetings since the 2014 master plan was adopted. She’s gotten to know what people in Avondale Estates want, what they would like to see, and what they hope to avoid. But before that, Dee worked at the county and state level to improve the public’s access to and use of public spaces. And she led many of the charges to do that. Now, as a candidate for commissioner, she wants to lend her voice and her expertise in making sure we – the public – get the most out of our city, our parks, our lands. Dee has vision. She has wisdom. And she’s been in Avondale Estates for 39 years. I realize that means she’s still a newcomer to those who pioneered this city, but for those of you reading who – like me – are relatively new Avondalians that means Dee Merriam understands what this city has been and what it can be.

Also of note: she holds Masters Degrees from BOTH Georgia Tech for Urban Planning and the University of Georgia for Landscape Architecture, checking both SEC and ACC boxes. Both degrees and her experience in the real world convey the knowledge and skills needed to serve as one of our commissioners.

So I am voting for Dee Merriam for commissioner. And you should, too.

I teach high school students up in Chamblee. And I’ll share a bit of wisdom I share with them: don’t just listen to one voice, one perspective – or worse your social media feed. Listen to multiple perspectives and ask questions. Meet Dee if you haven’t. Chat with a neighbor who has one of Dee’s signs in the yard. Heck: meet all the commissioner candidates. You get two votes – for separate candidates wise guy! – and I can guarantee you that after getting to know all your options, you will find that Dee Merriam deserves one of your votes.

Now that I think about it, as a high school teacher, my students work hard to earn an A in my class because it shows they care, they understand and they have a vision for the future. But I’m here to say loud and clear that what Avondale Estates needs – because she cares, she understands and she has vision – is a Dee.

This letter is in support for Dee Merriam, candidate for Avondale Estates City Commissioner.

I lived in Decatur for almost 20 years – and truly loved it – before moving to Avondale Estates with my wife and baby son in 2014.  We moved because we were charmed by Avondale’s old neighborhoods, and because we saw Avondale’s downtown area poised to grow in both size and sophistication – many of the same things that had first attracted us to Decatur.  We were also optimistic that Avondale, in managing this growth, could learn from Decatur’s incredible successes, as well as some of its missteps.

Today, I am more optimistic about these things here than ever because I’ve come to know people like Dee Merriam.

I first met Dee at a city planning meeting more than a year ago, and I was instantly impressed by her welcoming nature, her deep knowledge, and her disciplined approach to planning.  Now that I’ve come to know her, it seems to me she represents not just a moderate voice, but an uber-qualified moderating voice in this city’s current “growth vs. legacy” debate.

At this point all the candidates for Avondale’s Board of Mayor and Commissioners (BOMC) are saying they want “beautification”, “smart growth”, “fiscal responsibility”, “transparency,” and “citizen inclusion.  We only need to go to a few BOMC meetings, look at track records, or read Decaturish to see that the reality doesn’t always match the rhetoric.

Dee’s track record, in contrast, strikes me as “walking the talk” – she has spent decades working in every level of government (county, city, state, federal), and achieving every one of the items on the above wish list.  Her long list of successful public projects, her graduate training in City and Regional Planning, her well-known integrity, and her demonstrated record for community inclusion all give us a good idea of how she will really manage, and how she will really vote.

Dee is a professional.  Where some of the candidates can only speak vaguely, Dee has a vision for the details.  If most of the candidates say they want similar things, Dee’s experience and training give her a specific set of tools, processes, roadmaps, and blueprints for how to achieve them.

Knowing her personally and having watched her work, I feel very confident that Dee Merriam, as a City Commissioner, will do everything in her power to keep all stakeholders honest and on-task as we move toward an Avondale that everyone wants.

Avondale Estates residents have the inspiring opportunity on Nov. 5 to vote for Dee Merriam, a highly competent and dedicated citizen, to fill one of two open commissioner positions on City Council. The city would be well served to have Dee officially involved in leading its development at a time that will bring dramatic changes to its downtown and surrounding areas.

I have known Dee and her husband Tom since they settled two doors down from Vicki and myself on Lakeview Place in 1980. We were awed by how quickly they transformed their backyard from an overgrown weed patch into a beautiful, garden space from where over the years we could hear the cries of delight of their children as they swung on the rope fettered to a tree limb or scampered about in their playhouse.

More recently, that backyard has been a space where many city residents have come together to enjoy the Merriams’ special gift for creating community and developing friendships.

Keeping up with Dee’s professional career has been a challenge for anyone who knows her. Although retired Dee is considered to be a national expert on walkability and access to greenspace. Last year she was an invited speaker at the New Partners for Smart Growth Conference in San Francisco. This November she has agreed to speak at the American Public Health Association’s national conference in Philadelphia. Dee has worked in every level of government — city, county, regional, state and federal — and as she says “my career has been focused on the creation of places where people want to be,”  which includes — and this really goes without saying — Avondale Estates.

It shouldn’t be a surprise to city hall regulars that Dee would throw her hat into the political ring since her attendance at the BOMC, Planning and Zoning, and Downtown Development Authority meetings has been constant and her opinions expressed in a refreshing, sensible and knowledgeable manner.

The city has been fortunate to have such a committed citizen living within its limits, who appreciates its founding as an historic planned community and who wants to make certain its future retains its livability.

With Dee, it’s not just talk. She’s repeatedly rolled up her sleeves to support our city. If you don’t believe me, just wait until she knocks on your door to let you know what a privilege it is to be living in Avondale and what needs to be done to realize its full potential.