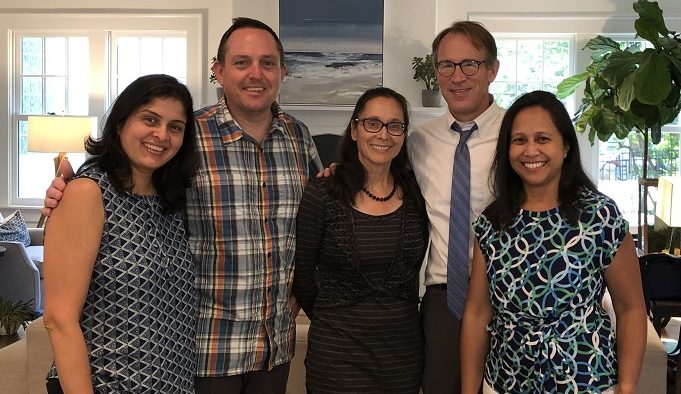 About this series: As part of our ongoing election coverage, we invited each candidate to submit up to three letters of support. Here are the letters in support of George Dusenbury, who is running for Decatur City Commission District 1, Post B.

When voting for Decatur City Commission, I want someone who will be a strong advocate for all Decatur residents AND my community.  That is why I am voting for George Dusenbury for the District 1 seat.

Five years ago, an article in the Focus caught my eye. George had recently moved to Decatur, and he was working to create a neighborhood association to represent the thousands of Decatur residents who call downtown home. I was excited to see George taking the lead on this effort. I knew of his work at Park Pride, and how he had built the organization around listening to people and empowering them to strengthen their communities by improving their parks. I hoped George would bring that same effectiveness and energy to our community.

The number of Downtown residents had reached a critical mass, and ours was a new voice and a new experience for Decatur. I had attended Decatur listening sessions when they wanted input and there were no tables for the downtown neighborhood. George wanted to get us organized so that our voice could be heard – so that we could advocate on the issues we faced every day.

Not surprisingly, what had motivated George to form the Downtown Decatur Neighbors was a concern that Decatur was about to build hundreds of new apartments and condos with the Square being the only downtown “park”. George didn’t just rally us to advocate for parks. All of our concerns and ideas about broken sidewalks, dangerous intersections, how would we manage traffic and parking and the other impacts of development, were part of the discussions. A Neighborhood Association helped give us a much-needed voice.

Shortly before the Downtown Decatur Neighbors (DDN) was formed, residents in my community were very concerned about the impact of the proposed 315 West Ponce development. The development’s height and parking deck would have towered over our homes and the density required several variances to fit everything in the available space. We felt that the City staff was not listening to our concerns. We reached out to our Commissioners for support, to NO avail. We were left to act alone, with a lawyer, to lessen the development’s impacts on all nearby neighbors.

I am confident that George will not leave residents alone when they ask for help. Under his leadership, DDN successfully opposed a variance that would have allowed a drive-thru in the City’s special pedestrian zone, successfully advocated to reinstate a crosswalk the City had removed and to make other pedestrian-sidewalk improvements.  While we don’t yet have a downtown park, George helped organize park advocates from across Decatur in an effort that led to the City acquiring seven new green spaces.

In each instance, George took up a cause that was not his own and successfully advocated on behalf of the people that he represented.

I will not always agree with George. There will be times when I will be frustrated by a vote or because he will not help. But I know that George will always listen, take the time to understand the concerns and have an honest, open conversation.  And even when we disagree, he will have my concerns in mind and look for opportunities to address them. That is what Advocacy is and that is what we need on our City Commission.

That is the way George has been for as long as I have known him.  And that is why he has my vote for Decatur City Commissioner.

This year’s City Commission race is one of the most important that we have had in a long while.  Unprecedented growth in our population and school enrollment are stressing the fabric of our community, and our leaders will be faced with difficult challenges over the next four years.  We would benefit from having Commissioners with the experience and knowledge to make the best possible decisions for our future – and the confidence and conviction to stand up for their beliefs.  That is why I am voting for George Dusenbury in the race for District 1 City Commissioner.

Both Erin and George are great volunteers who love Decatur and want to make it a better place.  But George brings a unique depth and breadth of experience on public policy issues born through a twenty-five-year career in public service.  Much of that service has been in community organizing and quality of life issues like transportation, smart growth, stormwater management and parks.  He even spent a year running a shelter for homeless men.

In addition to his deep experience on these issues, George is a pleasure to work with, bringing a collaborative, can-do attitude.  He epitomizes the old saying, “it’s amazing what you can accomplish when you don’t care who gets the credit.”  Or as George likes to say – “what makes a good idea great is when someone else comes up with it.”

We elect City Commissioners to make the best possible choices for the future of our City – choices that will impact our lives, our families and our community.  When I ask myself which District 1 candidate I trust making difficult decisions regarding smart growth, transportation and housing, the answer is George.  He will have my vote on November 5.

George Dusenbury and our neighbor Erin Braden are both running for the City Commission seat for District 1. Like many others in our city, we like and admire Erin, a lot. We are writing to explain where George stands apart as an exceptional candidate.  We believe that when you meet George and read and compare his positions on issues critical to our city, you too will understand why now is the time to elect a commissioner with his experience and know-how.

George has spent more than 25 years working at the national, state and local level developing a deep well of policy expertise, diverse experiences, and tangible results.

– He worked for 10 years with U.S. Representative John Lewis, as his Legislative Director in Washington D.C. and as District Director in Atlanta. He developed policy expertise in transportation, environmental, fiscal and housing policy.

– George was the Commissioner for Parks & Recreation for the City of Atlanta where he managed a staff of over 300 and an annual budget of $30 million. This operational experience is comparable to the City of Decatur and gave him a perspective of how local government operates, gets thing done and works with a diverse community of stakeholders.

– He currently serves as the Georgia-Alabama State Director for The Trust for Public Land, a non-profit dedicated to preserving land and building parks for people.

– Locally in Decatur and the Atlanta area, George has demonstrated volunteer leadership at the grass roots level. He helped create and has led the Downtown Decatur Neighbors – where he led advocacy for Decatur’s livability. George was co-founder of Decatur Parents Network – a city-wide PTA committee that helps parents support their teens make safe, smart decisions. In Atlanta, he held leadership positions with Candler Park Neighborhood, Beltline Network, Historic Oakland Cemetery, and EarthShare of Georgia.

His policy expertise and government experience will be a critical asset as he works with the city to address the challenges presented by the rapid growth and development in Decatur.

As a City Commissioner, George would promote a pause and revise of the city’s development code.  He would call for pausing large scale developments so that we can develop a holistic master plan to integrate development with traffic, stormwater, parks, parking, and affordable housing – while protecting the character of our neighborhoods and quality of our schools.

Some say we don’t have a problem.

– One illustration: The city’s current code allows developers to build 80-foot tall buildings (6-7 stories) all the way down West Ponce to the First Christian Church, and down Church Street past the Bell Street entry to the Decatur cemetery. To us, this type of continued development would have a lasting negative effect on our city’s charm, our tree canopy, public parkland, stormwater management, traffic and our schools.

– George’s expertise and know-how will give him the conviction and confidence to represent our interests – when working on planning and zoning on issues that intersect all of these key elements to our city’s future.

We believe a revised and integrated development code can address key issues such as affordable housing, investing in greenspace/parks, a common sense transportation plan AND allow our school system to maintain the high-quality standards that have contributed to our current property values by avoiding overcrowding.

What we can expect if George is elected

We are at a critical juncture in our city – the time to envision what Decatur will look like 10 and 20 years from now is at hand. Will it be tall building corridors like other US urban cities, or will we be a balanced and charming version of our current selves?

George is the right person to work on the City Commission at this very juncture – his unique combination of operational experiences, his policy expertise, his connections inside and outside of Decatur, and his proven relationship and listening skills in dealing with diverse stakeholders will contribute greatly to the common good.  George’s repertoire will serve us all well when courses of actions are being contemplated in the moment – he will not be afraid to ask the question, with knowledge, confidence and intelligent suggestions for next steps.

We encourage you to learn about George for yourself.  You can read his positions and experience on his website – including a side by side presentation of answers that George and Erin have made to questions posed by Decaturish.  George’s supporters around the community have made it easy for everyone to talk with George face to face –  where you can meet him in person and ask questions and express your ideas and concerns about the city’s future.