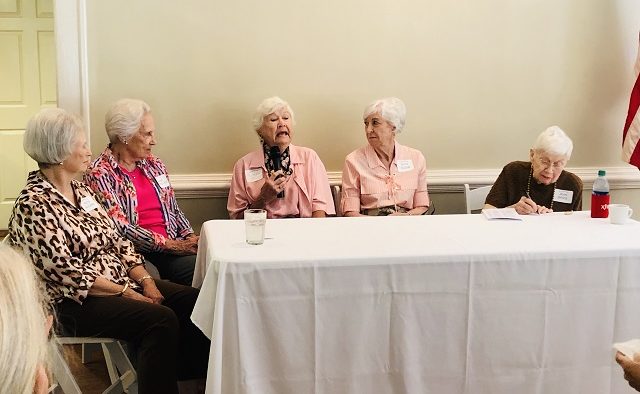 On Oct. 3, the Avon Garden Club had a delightful program presented by Five Wise (and witty) Women. The panel, introduced by President Barbara Fisher, consisted of Jean Brice, Ruth Olson, Rutledge Gross, Jeanie Schoelles, and Ruth McCann. As a group they have more than a century’s worth of experience with Avon Garden Club and more than a century’s experience living in Avondale Estates.

Brice, Olson, and McCann have all served as President of Avon Garden Club during their tenure in the club and Avon Garden Club was named the Club of the Year during one of Brice’s terms. Jean Brice recently retired from her position as Membership Chair a position she had held for approximately 30 years. During that time she saw the club grow and prosper. Olson, who moved to Avondale Estates with her husband and three children in 1973, followed Brice as President.

It was during Olson’s term as President (1986-87) that Avon Garden Club’s annual Pancake Breakfast began which continues to the present and is the Club’s biggest fund-raiser. The Pancake Breakfast is a community event in addition to being a fund-raiser with families of all ages participating. (Feel free to attend November 23rd from 8:00 to 11:00 at the Avondale Community Club on Lakeshore Dr. in Avondale Estates. Tickets are available at the door the morning of the event)

Jeanie Schoelles, who lives in Decatur rather than Avondale Estates, got involved with the Club at the suggestion and urging of long-time member Phoebe Stevens. Schoelles described that she was recently widowed when Phoebe urged her to help with the butterfly garden Phoebe was installing at Avondale Elementary School as a means of working through her grief. From that work Schoelles joined Avon Garden Club and has been a member ever since.

She recalled her mother telling her that “for every person who comes into your house, 100 will pass by” meaning that you need to keep your front yard looking pretty even if the interior of your home isn’t neat and clean!

Rutledge Gross was the only member of the panel who does not belong to Avon Garden Club. However, she has lived in Avondale since her family moved here in 1941.

One of her favorite childhood memories was of riding her horse all over town back when the bridal paths were really bridal paths.  She reminisced about Avondale Estates having a grocery store that delivered your groceries and put them away! A dairy farm was on the spot currently occupied by the Wal-Mart at the intersection of Columbia and Memorial Drives.  There was a fully functioning hardware store in the business district.

Gross is the widow of Roberts (Bob) Gross who served as Mayor of Avondale Estates as did his father before him. In the past Rutledge has described Avondale Estates as a small city in which there are “old-timers” living alongside second-and third-generation families, something that does not happen in many towns

All panelists described Avondale Estates as a welcoming city in which all residents are valued for their contributions.  Their experience has been one of neighborly reciprocity of help in times of need and a place where lifelong friendships are formed and nurtured.