Sylvia Clark, great-granddaughter of Henry Oliver, speaks at the dedication of the new grave marker at Decatur Cemetery on Sunday. Photo by Cathi Harris.
Share

The Friends of Decatur Cemetery dedicated a permanent granite headstone on Sunday to mark the resting place of Henry Oliver, one of the first black landowners in Decatur and a prominent businessman and blacksmith in the city during the latter half of the 19th century.

“Where we used to have this temporary sign with the number 27 to mark his place [on the cemetery guided tour], we now have this marker to honor who he was,” said Cathy Vogel, one of the founders of the FODC, the nonprofit group that works to help restore and maintain the historic burial ground. “He was a patriarch, a blacksmith, an entrepreneur and an honored member of our community.”

Born into slavery in 1826, Oliver moved to Decatur after Emancipation. Family oral tradition holds that he was given a large portion of land from his father, who had also been his owner. He sold parcels of land to both black and white residents and started a successful blacksmithing business. In 1902, one of the major roads on Decatur’s west side was named Oliver Street in his honor. The designation lasted until 1984 when the street was incorporated into Commerce Drive and renamed. Henry Oliver died in 1904 and was buried in the then-segregated African-American section of Decatur Cemetery, but his grave was unmarked. 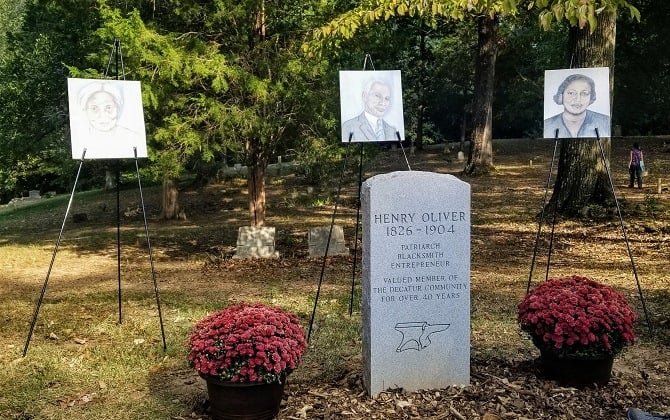 New granite headstone to mark the grave of Henry Oliver, a prominent black businessman and landowner in early Decatur. Photo by Cathi Harris

Sylvia Clark, Henry Oliver’s great-granddaughter, attended the ceremony and spoke about her family and Oliver’s legacy. Standing in front of the grave, which was flanked with Clark’s painted portraits of her great-grandmother, also named Sylvia, her grandmother Lena Oliver, and Lena’s husband, Samuel Harper, who built the steeple for Agnes Scott College’s bell tower, she talked about growing up in Decatur’s Beacon community, with the street named for her great-grandfather at the heart of it.

“I’ve lived in Decatur 77 years,” Clark told Decaturish after the ceremony. “Older people would bring me over here to the cemetery. I used to think it was just because I would help them, and they wanted to keep me out of trouble. But now I think it was because they wanted me to know about the history and to carry on.”

Clark’s grandson, Justin Oliver Richardson, has grown up hearing the family history that Clark has passed down through her stories and paintings and is glad to see tangible recognition of his great-great-great grandfather by the city.

“I have been hearing about Henry Oliver ever since I can remember,” Richardson said. “It is great to see this finally happen. It means a lot.”

DeKalb County Chamber of Commerce President and CEO Katerina Taylor also attended the dedication. Taylor is spearheading a drive to restore the name, Oliver Street, to the portion of Commerce Drive that was renamed in 1984.

“I think that Henry Oliver is the epitome of what the chamber is about,” Taylor said Sunday. “He was a community leader, an entrepreneur and we should highlight that.”

Because the street was renamed at the Chamber’s request 35 years ago, she feels it is her duty to try to mitigate the loss to the community’s history that occurred when his name was removed.

“I hope that, if we cannot restore the street name, we can at least add his name back to it,” she added.

For people interested in supporting the restoration of the street name, Taylor advised writing to the City Commission and the Chamber of Commerce to voice their support.

“I think it is also important to ask for the restoration of the street name, not for a renaming,” she said. “We want to restore the original name of the street.”

FODC’s Cathy Vogel said that there are other graves in the cemetery, particularly in Section 6 – the historic African-American section that includes the Oliver family graves that need restoring. Though she is not aware of other unmarked graves, many of the gravestones have been damaged or have deteriorated.

FODC is looking for volunteers and donations to support the restoration of damaged monuments and to continue to maintain the graves’ appearance. People interested in helping should contact her at [email protected].