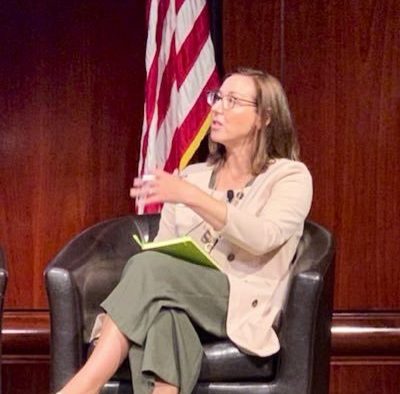 Per a management agreement between the DDA and the city, the city provides staffing and professional services to the authority, Decatur City Manager Andrea Arnold said at the meeting. Though the decision about who would serve the board is entirely up to the city, she asked that the board formally vote to confirm Threadgill in the position. As planning director, Threadgill already worked closely with Menne and has – over the preceding months – worked with her to get up to speed on development projects underway with the authority.

“Lyn’s retirement was not a surprise and – being the professional that she is – she wanted to ensure that there would be a smooth transition,” Arnold told the board.

As its first order of business with Threadgill as director, the board voted to grant an easement to the city to install support and equipment for the new traffic signal at the intersection of Talley Street and South Columbia Drive on property the DDA owns at 252 S. Columbia.

The mast arm and signal box were originally planned for the property on the opposite site of Columbia, but the homeowner objected to giving up a significant portion of their front yard for the equipment.

“That is understandable given that they don’t have a lot of space there,” Threadgill said. “The easement will be 14 feet by 38 feet and will include the cabinet that contains the signal equipment as well as the mast arm.”

The city will also need to have maintenance access to the box and mast arm, so the additional space is needed to allow workers to access the box regularly.

The DDA purchased the 1.2 acre property at 252 S. Columbia in January for $1.9 million. In doing so, the authority said it wanted to ensure the city could control what was built at that key gateway to the East Decatur district.

The easement is an example of how the property acquisition is beneficial to the city, board member Fisher Paty noted at the meeting. “This helps [Decatur] avoid a long process of trying to acquire the right-of-way for the signal.”

The traffic signal will replace the four-way stop currently in place at the intersection, which is a key route for both cars and pedestrians to get to the recently opened Talley Street Upper Elementary School.

In other development news:

– Threadgill and several DDA board members plan to meet next week with representatives from Thrive Residential to continue to discuss the affordable housing component of its redevelopment of the old AT&T training center at 108 Park Place.

-Construction is underway on the redevelopment of the Bank of America property in downtown Decatur. The developers have broken ground on the new bank building, Threadgill said. When that building is complete and the bank relocates, construction is expected to begin on the mixed-use project planned for what is now the bank’s surface parking lot. Mill Creek Residential plans a complex of 194 apartments, with several restaurants and other retail businesses housed on the ground floor.

-The apartment development planned for Weekes Street near Commerce and S. Columbia Drive will again go before the Decatur Zoning Board of Appeals (ZBA) on Monday, Oct. 14, to request a variance to the city’s stream buffer requirements. The DDA has passed a resolution in support of the developer’s request, Threadgill noted. The issue was tabled from a previous ZBA meeting because the board wanted the city engineering staff to provide more information.