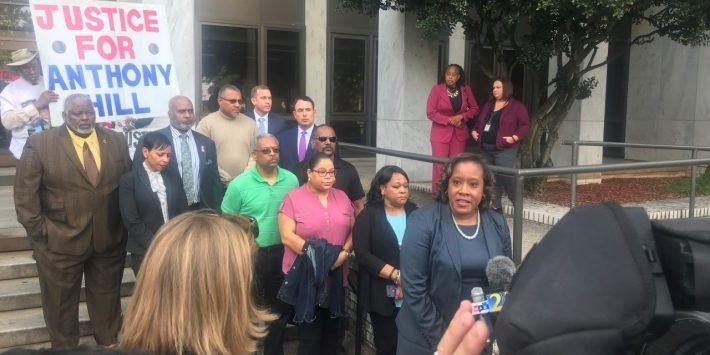 Former DeKalb County police officer Robert Olsen was found not guilty Monday on two counts of felony murder in connection with the death of Anthony Hill in 2015.

After six days of deliberations, the jury did find Olsen guilty of aggravated assault, two counts of violating his oath of office and one count of making a false statement.

Hill, an Air Force veteran, was unarmed and naked when he was shot by Olsen. His family said he was having a mental health crisis at the time.

Olsen is white; Hill was black.

“We are grateful that in finding this officer guilty of four counts this jury did speak to that accountability. And did find that he was responsible for the death of Anthony Hill,” Boston said.

Boston said she stands by the decision to try Olsen for felony murder.

“I can’t speculate as to what was in all those juror’s minds,” she said. “But I think all of you know that these cases are very difficult not just here in Georgia but across the United States. It is very difficult to prosecute a police officer for murder under these circumstances.”

Olsen faces up to 35 years in prison for the four counts on which he was found guilty.

Sentencing is set for Nov. 1.