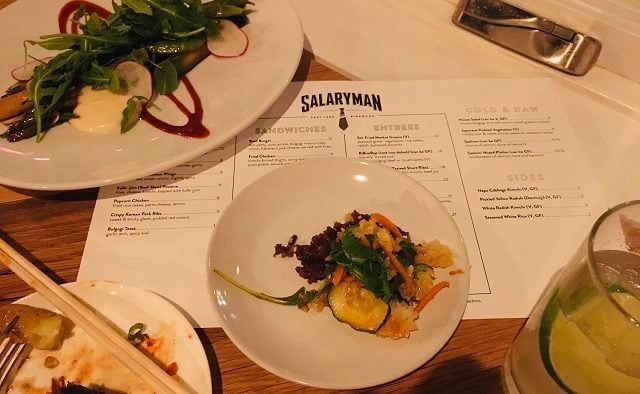 Salaryman Bar & Grill at Hosea Williams and 2nd Ave. in East Lake is the latest restaurant from Korean Wives Hospitality Group, which is also behind Suzy Siu’s Baos, Ramen Station, Noona’s, and the late lamented Son of a Bear and Taiyo Ramen in Decatur.

The concept as described by owner Michael Lo is to be the kind of place that “salarymen” — a Japanese and Korean term for white-collar workers devoted to their company — come to blow off steam after work.

The inside is casual-sleek with a shuffleboard game (and a sign admonishing players to be nice) and the menu can best be described as bar food fusion.

I ordered a Tokyo Gin & Tonic which admirably demonstrated the best of the concept in action:  made with Roku gin, lime, ginger, and yuzu (Japanese lemon) bitters rather than the standard angostura. Definitely a gin and tonic, but more interesting.

The Popcorn Chicken appetizer was good but a little too salty, while the gochujang-based sauce was great.The bulgogi beef in the Bibimbop (a dish I normally love so much that it’s my go-to Mother’s Day food request) was also a little too salty, though the dish overall was still tasty.

The Kolbi Jjim poutine appetizer was tasty but confusing. My half-Canadian son declared, “That is not poutine” (though he ate it nonetheless). It was very much more like chili cheese fries, only with kimchi. Verdict: Kimcheese fries, spicy and good! But adjust the expectations created by the word “poutine,” assuming you have any. Our next table neighbors said they didn’t know what poutine was, so there’s that.

Excessive saltiness reached an unfortunate peak in the Mixed Market Greens. I normally order a dish like that when I want something light, but the braised Chinese broccoli was too salty (and the sauces too heavy) to be balanced out by the lighter greens. I wound up picking out the least salty bits and leaving the rest on my plate.

The Beef Kolbi Jjim (Braised Short Ribs) was excellent and easily my favorite. It had familiar roast beef tastes, with potatoes, carrots and onions, light and not at all greasy, with subtle interesting flavors that added to the beefy goodness.

The Hangover Ramen was somehow both spicy and comforting. Stimulating but sustaining, exactly what you need a snootful of the day after having a little too much fun.

The concept of Salaryman is fun, familiar bar food with fusion twists along with some Japanese and Korean classics. The execution is still a little hit or miss on some things, but when it’s good, it’s really good. The best dishes (in my opinion, the Beef Kolbi Jjim and the ramen) hit that difficult sweet spot between when you’ve had a hard day and want comfort food, but simultaneously want to go out and get something different.