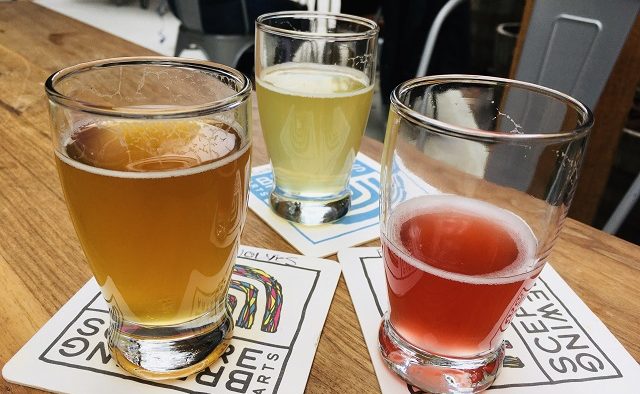 Sceptre Brewing Arts is tucked in next to the Dollar Tree on East Lake Drive, between the East Lake-Oakview intersection and Oakhurst Park.

Bright and colorful, it has lots of dog-friendly outdoor seating (some of which is sheltered from the rain) with a couple of hammock seats and a smaller indoor space. A dart board, corn hole, and a selection of games like “Sorry!” and “Uno” contribute to the playful atmosphere.  People feel comfortable bringing their children on a Saturday afternoon, and a group of under-fives had a chaotic but friendly “soccer” game going on in the space next to the corn hole.

The food is solid. The smoked trout dip appetizer is more like a spread than some I’ve had, and full of actual trout which I consider a plus (if you don’t actually like smoked trout, why are you eating it?). The fish and chips were nicely breaded without overpowering the fish it wasn’t greasy.

But if you’re here, you’re here for the beer. As well you should be. They have five ounce pours so it’s relatively easy to try a variety of beer if you have dedication, a little help, or both.

Bewarewolves, a double dry hopped DIPA, is the first beer on their menu list and clearly a favorite, as it’s also one of the beers in fermentation coming up. I am personally not fond of hoppy beers, so I hasten to state that I am not this beer’s target audience, because….hoo boy. VERY HOPPY.  HIPPETY HOPPY. There are hops in this beer. If you love hops, you will love it too. Did I mention it has hops?  HOPSMYGOD.

Fortunately for me they also have Barbelith, an Imperial Stout. Dark and complicated like my soul. Smells like brown paper, tastes like coffee and dark chocolate but also a little spicy. Mmmm, stout.

Silver Door, a blackberry sour ale, is a beer for people who don’t like beer. So citrusy it tastes of grapefruit, it’s a pink Halloween Sweet Tart of a beer, though that impression is much more in the nose than the tastebuds.

Bruh, Gawd is a Golden Strong Ale which their menu write up describes as “reminiscent of 6th century Welsh Bragawd.”  I can’t speak to that, being neither Welsh nor from the 6th century, but it is definitely a tasty honey beer. If you like other honey beverages like mead and tej, you will definitely like this beer. If you find them too sweet, you may still like this beer as the honey in it is discernible but not overbearing.

Built On Ashes is an India Cream Ale. Like many of Sceptre’s beers it has a highly evocative aroma, which in this case is like cut grass. Light, tangy, slightly bitter.

Their porter, Barkenstone, tastes very brown. By which I mean that the nutty roasty description on their beer menu is quite accurate. It’s not really sweet but you can tell the dark cane syrup it’s brewed with is there.

Red Eyed Devil is a double IPA with beets. This beer was much more pleasant and friendly than I was led to believe. The red color makes it fun (bring your own skull mug for the full effect) and the beets give it an earthy aftertaste. Spicy and complex but not too strong-tasting.

Snake Nation, a cultured pale ale, is sour and bitter but fun. Like that one friend who snarks her way through life. I have sympathy for this beer, as I am sometimes that friend, too.

Sceptre Brewing Arts is located at 630 East Lake Drive, Suite E, Decatur GA 30030. They are open Tuesday through Thursday from 4 p.m. to midnight, Fridays 3 pm to midnight, and noon to midnight on Saturdays and Sundays.