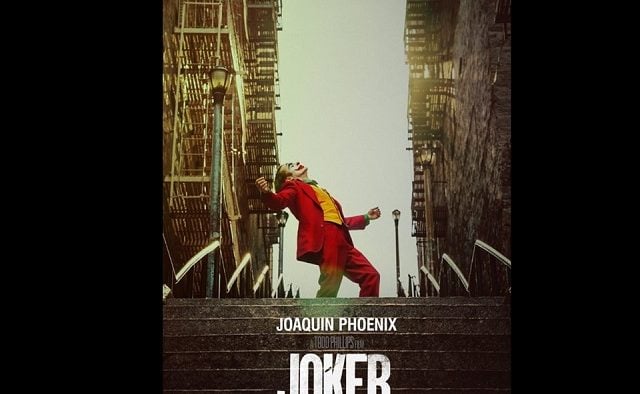 Arthur Fleck (Joaquin Phoenix) is a clown by day. We know that under the facepaint he isn’t happy. He wants to bring a smile to the world. That same world beats him down. Literally and figuratively. At night, he cares for his mother. She is obsessed with Thomas Wayne. Yes, from that Wayne family. Arthur doesn’t care about Thomas Wayne. Arthur dreams big. He dreams of being a comedian. Lights, applause, laughter, love, and being on TV. But he is unwell in a variety of ways. Life has not been kind to him or his mother. Everything changes for Arthur and Gotham City, when a coworker gives him a gun. And he uses it.

“I thought my life was a tragedy, but then I learned it was a comedy,” he says.

If you are curious about Joaquin Phoenix in this role, go see this movie. I really enjoyed the first 75 percent of the movie. While Jack Nicholson and Heath Ledger created Jokers identified by their smiles, Phoenix doesn’t mimic the past Jokers. He brings Arthur to life with a tragic laugh. The laugh is beautiful and sad. The reason for the laugh will break your heart. Phoenix creates a character we’ve never seen before.

Director Todd Phillips shows us a supervillain who starts as a sort-of vigilante. Arthur attempts to right a wrong. You can’t quite call it heroism. It’s hard to feel empathy for him when his only display of power is murder. His only voice is his gun. When he doesn’t have his gun, he makes use of other sharp objects. And his rage.

If you can’t handle grim storylines and squishy violence, skip this movie.

If you aren’t in the right emotional place, skip this movie.

If you’re worried about the social context of violence and anarchy, you’ll have to skip this and a lot of other movies.

Then again if you are squeamish and sad and worried and brave, maybe you should see it.

We never really know what to believe about the past or the present. The story is built on lies, confusion, dreams, and manipulation. I enjoyed the scenes where we see a lie, but want to believe it as the truth.

Arthur isn’t supposed to be a hero. He is a villain, and the movie tries to give context to his villainy. It’s a comic book movie without the fun. The evil here is not world domination. It is the way the poor and sick are ignored. The evil is the way the trash is heaped upon us, and we accept it. Until we don’t. In the end, “Joker” is a movie about good and evil just like any other superhero story.

During the last 25 percent of the movie, there is more violence. Some of it is drawn out. Some is over in an instant. I noticed who was killed and who was not. One of the deaths is quiet. No blood, no guts. It was the one that upset me the most. Then more death and a very heavy-handed monologue at the end of the film.

We created this monster. I get it. We are the monsters. I get it. The system fails so many. Yes, true. The monsters are the rich people who live in their gated homes and communities. Let’s not judge the actors and directors and producers of this film for their nice houses.

Heroes live with overflowing trash on the streets and rodents of unusual size nipping at their heels. Everything is doom and despair.

The movie starts out as an interesting character study. But when we finally see Arthur transformed into the Joker, he complains that none of us have truly seen him. The irony is that Arthur never really looks at anyone either. He is guilty of not “seeing” his therapist or his neighbor or his mother. He doesn’t understand that other people might be suffering. He is the Joker, because he fools himself most of all.

When I go to the movies, I like to escape reality. “Joker” is too real.The sad and abused character who turns into a villain is hard to watch. I don’t find melancholy entertaining. My dream Joker would actually be funny. Truly happy and a bit homicidal is a good dichotomy. This film had no surprises. It goes from bad to worse for poor Arthur.

Because “Joker” is an analysis of society, some will call it high art. Honestly, the acting comes close. Phoenix is good. I’m all for elevating comic book movies to high art.

Because “Joker” is violent, some will call it a dangerous film. We should be aware of what type of violence begets violence. This movie does not advocate violence. Arthur repeatedly tried to do the right thing in the first half of the story. Counseling, medication, a hobby. I hope that people watching the movie might think about options for care if they need help.

You can’t be mad at a movie about a bad guy, showing you that he is a bad guy. We knew what we were getting when we went into the theater.

Because “Joker” is nihilistic, some viewers will feel triggered by the end. It is not a movie for all of us. Or most of us. I’m not going to lie. At the end of the movie, I felt very depressed. It’s not how I want to feel after a movie. Introspective, yes. Sad, no.

If I try to look at the bright side, Phoenix used his body and voice and laugh to create something we’ve not seen before. He is capable of being both despondent and optimistic in the same breath. He moves his body like an archer pulling back a bow.

I liked the unreliable narrator and interesting re imagining of a comic favorite. I liked the glimpse of Bruce Wayne. The movie excelled in the small interactions. There is a wonderful, though brief, scene with Carl (Brian Tyree Henry) the admin at Arkham Asylum. You might also know Henry from the TV show “Atlanta” where he plays Paper Boi. There are so many moments of false hope. Arthur pleading with his case worker. Arthur bathing his mother. Carl realizing the truth about Arthur and trying in vain to keep that truth from him. The quiet scenes were more shocking than the violence.

“Joker” was much better than I expected. Grim, but good. Do I want to see it again? Nope. Did I like it? Sort of, not really. Could it be an Oscar worthy performance? Yes, but they aren’t going to give it to him because of Heath Ledger. Should you see it? Probably. It loses points for sending me into 24 hours of depression and a muddled ending. But that laugh was everything. Oh, that laugh. Grade B-.