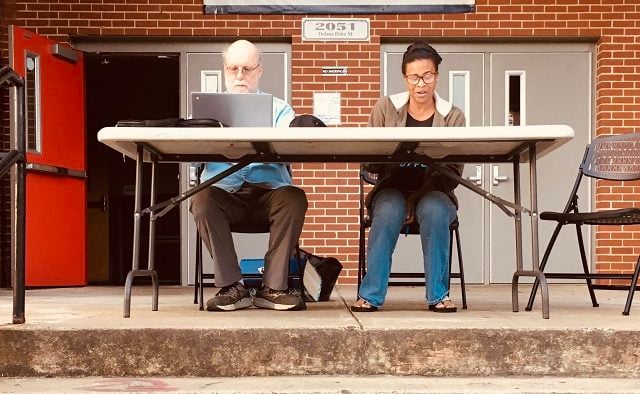 Residents, applicants, city department representatives, and others showing up to discuss, vote on, and announce zoning variances, permits, public works projects, and other regular business were greeted by a darkened building and a note on the door.

NPU meetings frequently have enough business that it’s difficult to cover it all in the hour and a half of allotted time. Waiting until November would crowd that month’s schedule as well as cause a delay for some applicants.

“There’s not really a way to reschedule [for October] and notify all of the parties involved,” said Vice Chair Kila Smith.

The meeting went ahead as scheduled, but outside in front of the building. Smith and Secretary Dana Blankenhorn sat at the top of the steps where they could be easily seen, while by unspoken arrangement announcements and presentations were given from halfway up the steps, in order to give speakers a fighting chance to be heard over passing cars.

The late afternoon began to turn into twilight. Public Safety Liaison Valencia Hudson from the office of Atlanta City Councilmember Natalyn Archibong announced that the Atlanta City Council is having a work session on Wednesday Nov. 6 at 10 a.m. to discuss the city’s plan for outreach to the homeless over the winter.

Hudson confirmed in response to a question about whether the city is now recycling glass, “Yes, you can put glass in your recycling bin, however if the glass breaks and the shards get into the other items, they take it to the landfill.”

Amanda Hallauer from the Department of Watershed Management announced that the Georgia Environmental Protection Division has declared a Level One drought, affecting most of the state including Atlanta. Residents are being asked to conserve water as well as abide by the year-round restrictions that limit outdoor watering to the hours between 4 p.m. and 10 a.m.

“The DeKalb Avenue water main replacement project crews have completed all of the main installation on that project and are performing site restoration,” said Hallauer.

Consent decree projects that have been ongoing in East Lake are expected to be completed by the first quarter of 2020.

“Roadways that will be impacted by construction and detours include Glenwood Avenue, 1st, 2nd, and 4th, Flat Shoals Road, East Lake Terrace, and Hosea L. Williams Drive, but all properties that are affected will get advance notice of activity,” added Hollauer.

Thomas Otoo from the Public Works department described a new ordinance proposed by Atlanta City Councilmember Marci Collier Overstreet that would create a definition for “small discount variety store” and require a 1,500 foot distance between such stores in a range of existing zoning districts.  The ordinance required a vote from NPU members and was approved.

As the sun began to set, a representative  from the Atlanta Fire Rescue Department asked people not to double park so as not to impede fire trucks responding to a call.

The fire department representative added that a new group of firefighters will be coming out of AFRD’s Recruit School at the beginning of December.  “As some of you may know, our staffing levels have been critically low. Getting recruits has been a big push for our fire chief and hopefully we will have thirty new faces on the job in the next couple of months.”

Street lights provided enough illumination to read the agenda for the zoning board applications.  The request to rezone 2161 Oakview Road from R-4 to PDH (Planned Development Housing) and the request to rezone 8 Clifton Street from RG-2 to MR-3, both previously approved by the Kirkwood Neighbors’ Organization, were approved by NPU-O members on condition that the site plan requirements set by KNO are met.  Applications for 60 Whitefoord Avenue and 1458 Memorial Drive were deferred.

The meeting was adjourned fifteen minutes earlier than usual.