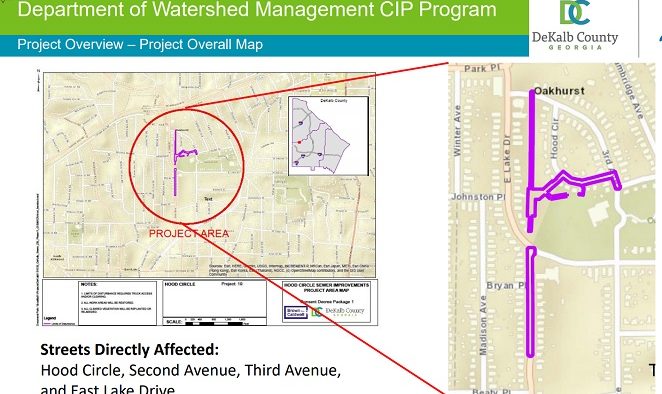 As DeKalb County continues sanitary sewer upgrades in Oakhurst, two local roads will be closed for several weeks, the city of Decatur announced.

The closures come as the county performs work on Hood Circle, one of the county’s worst sewer spill sites. Hood Circle has had over 12 sewer spills since 2014, prompting a $3.2 million project to fix the problem, according to the county.

The issue, the county said, stems from degraded sewer lines that resulted in a reversed slope on the pipes and a clog or choke point that backs up under high flow conditions during heavy rain events. New pipes the county plans to install will include an increased sewer pipe size, minimum slopes and a re‐alignment of the sewer route to eliminate crossing as many private yards as possible.

Beginning Oct. 28, the first stage of the work will take place, causing a road closure on Second Avenue between E. Lake Drive and Beaty Place. This stage – the “open cut replacement” stage, as the county called it – involves completely closing the road for approximately 12 weeks with traffic detoured accordingly. The road will be completely resurfaced when the work is complete.

Additionally, the county will do a jack and bore – a trenchless sewer construction method – near the Oakhurst Dog Park in order to minimize impacts to trees and the park.

The second closure, on Hood Circle near the intersection of Third Avenue and Leyden Street, will begin in mid-November and last approximately 12-14 weeks. During this closure, the county will put in and re-route a new sewer in the Hood Circle area before reconnecting service to local homes.

Mobilization of some equipment and project signage will begin later this week.

Detours will be in place for both closures and on-site signage will direct motorists to alternative routes as shown below.

MARTA’s Route #34 will be temporarily rerouted to Third Avenue. School bus routes for Decatur High School, Renfroe Middle School and Oakhurst Elementary School will also be rerouted, and the City Schools of Decatur will communicate changes directly to parents.