Supporters of a new city of Vista Grove plan community meeting on Oct. 23

Supporters of a new city of Vista Grove plan community meeting on Oct. 23

A proposed DeKalb County city of Vista Grove will likely be debated in the 2020 Legislative session, and supporters are holding a community meeting about the idea on Oct. 23.

If passed by the Legislature and approved in a referendum, the city would encompass North Druid Hills, Briarcliff and Embry Hills. It would have a population of around 60,000 people.

The meeting begins at 7 p.m. and will be held at the Carlos Center of the Greek Orthodox Church, located at 2500 Clairmont Rd.

“The main focus will be to further answer your questions about cityhood, but the meeting will also include a presentation by guest speaker Greg Ramsey of the Pendergrast Farm Development,” the meeting announcement says. “This is a very exciting and interesting type of development that we think will be a great example of smart growth that can also conserve open spaces.”

The ability of a Vista Grove bill to survive the 2020 session is far from a certainty. At the end of this year’s session, state Rep. Vernon Jones, D-Lithonia, agreed to sponsor the legislation headed into 2020.

Unlike previous years, Democrats control all seats representing the DeKalb County Legislative delegation. That means cityhood bills have lost their greatest champions, notably state Sen. Fran Millar, who lost his seat to Sally Harrell. That makes it more likely that DeKalb cityhood bills will be sponsored by representatives from outside of the delegation.

Another challenge facing the Vista Grove cityhood proposal is the declining amount of commercial property that could produce enough taxes to support a new city. Earlier this year, the city of Tucker annexed 50 acres of the Northlake Mall into the city limits.

Vista Grove supporters maintain the city is still feasible, even though a large chunk of commercial property is no longer available.

“The portion of Northlake Mall annexed into Tucker accounts for $389,000 of tax revenue,” an FAQ on the Vista Grove website says. “That is less than 1 percent of the revenue of the city. The [Carl Vinson Institute] study shows that Vista Grove would still be feasible.”

Then there’s DeKalb Strong, an advocacy group that played a major role in the narrow defeat of LaVista Hills in 2015. The group is opposed to any new DeKalb city, including Vista Grove. Vista Grove incorporates most of the area included in the LaVista Hills referendum.

Here is a map showing the boundaries of the proposed city of Vista Grove: 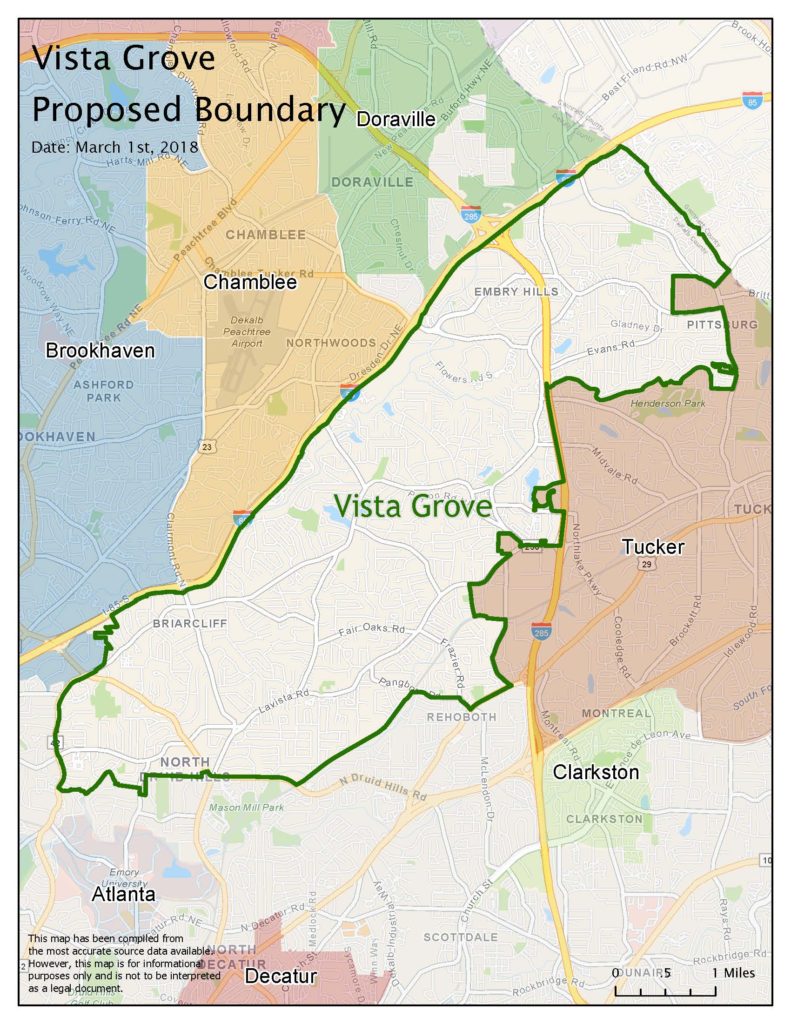