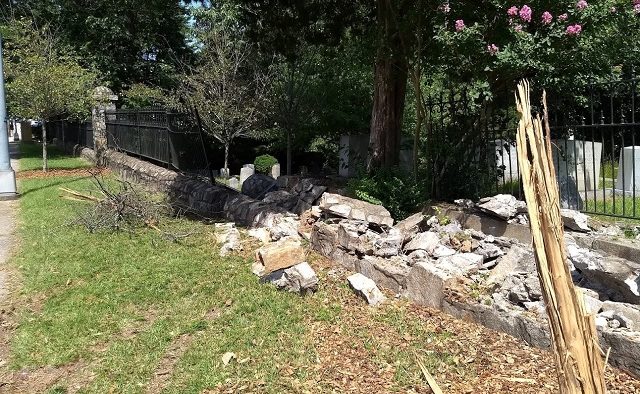 A hit and run driver knocked over a Decatur Cemetery wall on Aug. 1. File photo. Image provided to Decaturish.
Share

The wall of the Decatur cemetery is taking a beating this year.

Decatur Police say that on Saturday Oct. 19, a vehicle hit the wall on Commerce Drive at North Candler Street. A similar crash occurred back in August.

“On Saturday, October 19, 2019 at approximately 2:01 p.m., Decatur Police responded to a single vehicle accident in the 700 block of Commerce Drive,” Police Lt. Jennifer Ross said. “The accident investigation revealed the driver of a white 2013 Nissan Rogue was traveling westbound on Commerce Drive approaching North Candler Street when they lost control of their vehicle, left the roadway and struck the wall and fence for the Decatur Cemetery. The driver complained of head pain but refused treatment. The vehicle sustained disabling damage and was towed from the scene. The wall and fence were heavily damaged. The driver was cited for traveling too fast for conditions and failure to maintain lane.”

Back on Aug. 1, police responded to a call at the same location around 3:35 a.m., but the driver was nowhere to be found.

“Officers arrived and located an unoccupied gray 2013 Dodge Charger with a Florida license plate crashed into the wall of the Decatur Cemetery,” Ross said of the Aug. 1 crash. “Officers contacted the registered owner of the vehicle by phone. The registered owner met with officers at the Decatur Police Department at approximately 6:35 a.m.”

The owner said he was driving too fast in the curve on Commerce Drive and lost control, hitting the curb, a tree, and ultimately the cemetery wall and fence, Ross said.

“He left the scene due to fear and because he did not know what actions to take,” she said. “Officers did not observe any indicators of impairment. The registered owner was cited for [duty to report upon] striking a fixed object, failure to maintain lane and [driving] too fast for conditions.”