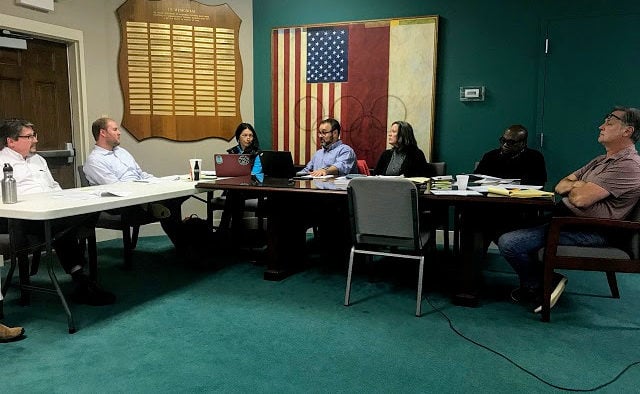 The Avondale Estates Board of Mayor and Commissioners held a special called meeting Wednesday evening, Nov. 6, to discuss the memorandum of understanding with Fabric Developers. The City Commission authorized City Manager Patrick Bryant to sign the MOU with the caveat that new language will be added. The board will also provide Fabric Developers criteria for selecting a design firm once the MOU is executed.

What is the Memorandum of Understanding?

The MOU is a non-binding agreement between the City of Avondale Estates, the Downtown Development Authority, the Urban Redevelopment Agency and Fabric Developers to develop the downtown Town Green project. The document states the goals and intentions of the city and Fabric but does not bind any parties to specific aspects of the project. The MOU acts as a framework to move forward toward a development agreement.

What is being built?

The city purchased four acres of land along Highway 278/ North Avondale Road and the DDA also owns one acre on the road. The Town Green project includes the construction of a park and a mix-use building.

All parties involved have agreed that the intent of the “Town Green Project is to activate an underutilized portion of the downtown urban redevelopment area and to provide a positive economic impact for the surrounding area through the creation of a large public green space along with the construction of a unique and transformative mixed-use development,” the MOU states.

A key goal of the Town Green Project is to provide a park and viable commercial, residential and cultural uses in downtown, according to the MOU. 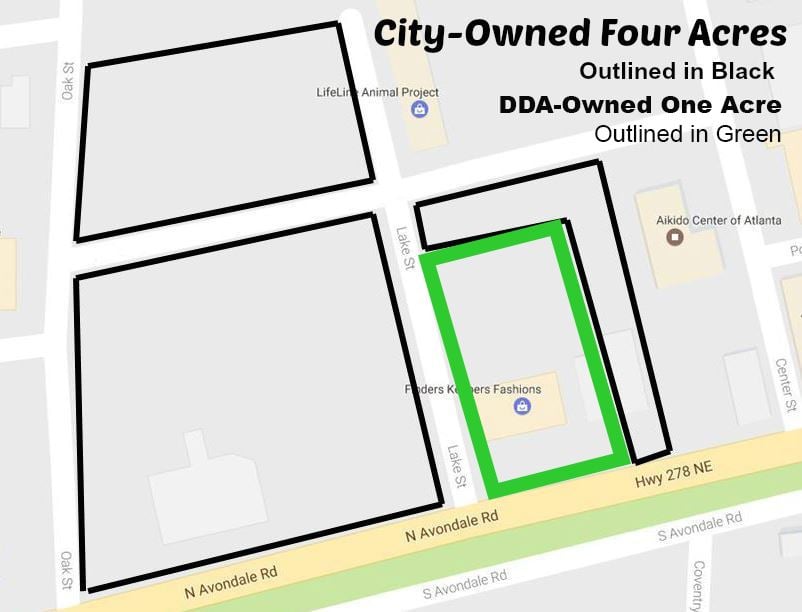 “After reading through the MOU a few times, one of the things that struck me was that there wasn’t much mention of things outside of financial and real estate transactions and in my view, the city is more than that. There are civic goals that we have enumerated in the Downtown Master Plan and I feel that they should be in here,” Commissioner Lionel Laratte said.

He suggested adding references to page numbers of the Downtown Master Plan.

For example, where the MOU states the project will provide “a unique and transformative mixed-use development” Laratte would like to see language added saying the development would be “consistent with the goals documented on page 63 of the Downtown Master Plan, ensuring alignment with the Livable Centers Initiative program, as well as the lifelong community initiative program.”

The commissioners, mayor and city manager supported adding the new language as long as it doesn’t add to what has already been requested and doesn’t cause delays.

Laratte would like to see language added to the MOU that says “the arts are a vital component of the city of Avondale Estates and downtown development will incorporate the support and facilitation of public art.”

Concerns were raised about this suggestion as the project is consistent with the Downtown Master Plan and this specific language is not in that plan, Commissioner Lisa Shortell said.

The board also wants to be cautious about not requesting anything additional of the developer besides what they asked for in the initial request for qualifications.

Laratte said that with the suggested new language, the board would not add the cost of art to the development and that it will incorporate the support and facilitation of public art. He said that could be something as simple as painting park benches or trash cans a different color that stands out.

“The reason that I think it’s Important to have this in here is because I believe that stating this upfront will keep it in the minds of everyone as we move forward with the and look at proposals for designs,” Laratte said.

Options for Selecting a Design Firm and Setting Criteria

The board has two options for choosing a design firm. Option one, which is the intent of the MOU, is to allow Fabric Developers to solicit a design firm based on criteria set by the City Commission. Fabric would then present the design firm to the board for approval.

The city commission will give Fabric a list of criteria to use when selecting a design firm once the MOU is executed:

– The designer should have extensive experience in public park design and should be able to demonstrate that.

– The designer should have ability to obtain the services of a registered landscape architect with similar experience that will be a part of the design team.

– The firm needs to stick to a budget.

– The firm should have a demonstrated willingness to resolve any potential conflicts of interest with stakeholders within the city, and an understanding and use of best practices in environmental sustainability in their projects.

Shortell offered suggested changes to the criteria, such as making sure the landscape architect is a part of the design team and wanted to make sure that the park will be of equal importance to the commercial property.

“This is huge,” she said. “The park design is even more important than the construction at this point, because we may phase the construction, but the design right now is drawing the picture that we will use as a roadmap going forward. For me, at least personally, this is the most important part and getting that criteria right by which we chose a designer is crucial.”

“It’s very important for me that both Fabric and the designer realize that for the public this is equally important and that we don’t want to skimp on this particular aspect of the park,” she added.

The criteria will be separate from the MOU and will not be added to the document. It will be given to Fabric once the MOU is executed as guidelines to selecting a design firm.

“Conceivably, the intent of the [MOU] document is this, [the board] submit to fabric criteria,” Bryant said. “They use that criteria to bring a design firm back to you for approval for hire. If that criteria is met, then the board would approve the proposal to hire that design firm and that design firm would then have a 45-day period from that date to create a public process that it then brings back to the board for approval.”

After a design firm is selected, the board would then be able to provide additional criteria to the firm about the public input process, Bryant said.

The second option the board has is to issue a request for proposals to solicit a designer. The RFP would contain similar criteria to what the board would otherwise submit to Fabric. Once proposals were received, they would be reviewed by city staff, the staff would then make a recommendation to the board.

The City Commission can choose to go this route at any time during the project, even if they have begun the process of allowing Fabric to select a design firm.

Bryant and city staff recommended that the board go with option one and allow Fabric to select a design firm.

“The reason why staff is recommending option one or the intention of the MOU … is because we believe if The board is establishing the same set of criteria to give to fabric as it otherwise would have if it released an RFP, we would save substantial time and money,” Bryant said.

The City Commission agreed to allow Bryant to execute the document with the caveat the new language suggested by Laratte will be added. The next step for the board will be to provide criteria to Fabric so they can select a design firm.

The Downtown Development Authority will also have to consent to the MOU in order for Bryant to execute the document and begin the process. The DDA’s next meeting is at 6:30 p.m. on Tuesday, Nov. 12 at City Hall.

The city staff will also seek the help of experts in the community to provide advice during the design process of the park and will form a small committee to do so.

The next City Commission regular work session will be at 5:30 p.m. on Wednesday, Nov. 13, at City Hall.