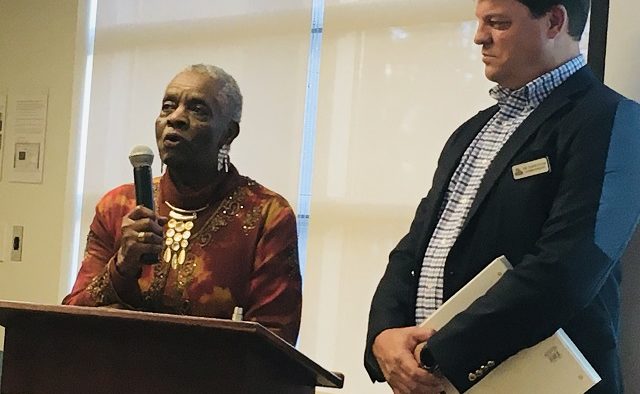 On Nov. 12 the City Schools of Decatur held a dedication ceremony to rename their central office building at 125 Electric Avenue the Elizabeth Wilson School Support Center.

Mayor Emerita Elizabeth Wilson, who was present, spoke about her family’s deep roots with the Decatur school system and the beginnings of her political career as a PTA mother turned activist.

“Those were the days of always separate but never equal, and it was our job in the PTA to make sure that the children got everything that they might need,” Wilson said. “I thought that we should educate all of the boys and girls. I made that my mission, that the city of Decatur would no longer have a school for white kids and a school for black kids. We all need education.”

In the 1960s, Wilson played a key role in the push to desegregate both Decatur’s school system and DeKalb County’s libraries.

Integration of the Decatur school system was completed in 1967. Wilson went on to become the City of Decatur’s first elected African American commissioner in 1984 and first African American mayor in 1993. She remains involved with the community, including preserving the history of the African American Beacon Hill community.

“I remember you were the first person to invite me to your house for lunch, and you were at my first interview, and you’ve just had a tremendous impact on me,” said Dude. “As we go through this very difficult racial equity work that we’re taking on, I think of you frequently and all of the courageous things that you did preceding us. Thank you so much for all that you’ve done for our school district, our kids and our community.”

At the regular CSD Board of Education meeting, new board member Jana Johnson-Davis was sworn in. Johnson-Davis was elected on Nov. 5 to complete Annie Caiola’s unexpired term and was seated immediately. She was unopposed in the election.

“I want to thank the people of the city of Decatur for your confidence,” Johnson-Davis said. “I want to thank Mayor Wilson for allowing me to stand on your shoulders. It’s really an honor to be here and I look forward to doing the work.”

School-level Teachers of the Year were recognized.

Newly opened Talley Street Elementary was an observer this year and was represented on the district award selection committee.

District Teacher of the Year was awarded to Ayoka Shakir, who teaches ninth and 10 grade at Decatur High.

“I’m happy and excited, and I really appreciate the recognition,” Shakir said.

Public comments touched on the senior tax exemption, Farm to School, the shortage of middle school substitutes, and advocating for African American teachers in the district.

During a planned discussion of the senior tax exemption study conducted by Georgia State University, School Board Chair Lewis Jones said, “Our self-imposed deadline is to have a firm proposal by September of next year, in order to make a legislative deadline for the 2021 session in order to continue the exemption. Our current exemption was passed with a five-year sunset clause, which means that after five years it disappears.”

The report about senior tax exemptions, produced by Georgia State University, found that the tax break cost the school system millions and did little to offset the enrollment growth in the school system.

According to the report’s conclusions, the tax break “did not change the buying or selling behavior of those that would qualify for the exemption in the city of Decatur. Nor did it alter the growth in enrollments in CSD that has been ongoing since 2010. Rather, the policy incentivized the older residents that had not previously filed for an age-based property tax exemption to file for one. This shift from other homestead exemptions to the 65 and over full homestead exemption can account for much of the unexpected loss in revenues due to the 65 and over policy change.”

The report recommended the school system’s leadership consider changes to the tax break if it is renewed if CSD wants to limit its impact on the school district’s finances. The report also had an important caveat.

Jones emphasized that the discussion of how to modify the exemption was just beginning.

White added, “Now we have to dissect that information to decide the best way forward. I don’t want anyone to leave here thinking that because this report has come out the board is going to decide to just not do [the senior tax exemption] anymore. That’s not where we are. We’re nowhere near there. I think we’re giving ourselves enough time to not make a rushed decision.”

Jones pointed out that the Georgia constitution only allowed three limits to be put on homestead exemptions: age, income level, and total value. Tenure of residency is not allowed.

Discussion focused on how to proceed in cooperation with the city of Decatur which will also be considering revisions to its homestead exemptions.

School Board member Garrett Goebel said, “How we work with the city will determine what the process will be, but I would imagine that we would need some kind of initial information, with a focus group to look at our work and revise options.”

Goebel suggested that the city and school system consider those revised scenarios and then seek another round of community input, which he acknowledged would be a lengthy process.

“If we short-circuit that process I think we’re going to wind up with a proportional amount of unrest and unhappiness,” he said.

Parents also contacted Decaturish about a proposed JROTC obstacle course that would be placed at Renfroe Middle School. A parent raised a concern that the project would interfere with students’ recess space at the school.

Dude said that CSD has paused the project.

“It’s on hold right now because some concerns came up,” he said. “We’ve paused it until we can get some of those questions answered and decide whether to move forward as is or make some changes.”