DeKalb Police responded to an attempted abduction that occurred at a busy shopping center in north Decatur during Thanksgiving week, according to a spokesperson for Emory Healthcare and a DeKalb Police spokesperson.

Emory Healthcare sent out an alert that said there was also a second incident in the area, but DeKalb Police have only been able to confirm one incident so far.

Decaturish first learned about the incident – which occurred at Decatur Square – after someone forwarded a security alert sent to employees at Emory Decatur Hospital.

According to the alert, on Monday, Nov. 25, at 9:35 p.m., an employee of the hospital was the victim of an attempted carjacking and abduction while picking up food at Decatur Square on North Decatur Road.

The alert from DeKalb County PD is as follows:

“The DeKalb County Police Department is seeking the public’s help to identify a person of interest in connection with an attempted kidnapping.

On November 25, 2019 at approximately 9:10 p.m. an unidentified male attempted to kidnap a 24-year-old female who was sitting in her car near Bad Daddy’s Burger located at 1575 Church Street, Decatur, Ga.  The victim was able to get out of the vehicle and run for help.

The victim described her attacker as a Hispanic male, 40-50 years old, 5’00”-5’02”, 130-135lbs, with short black hair, wearing a black jacket, dark pants, black hat, and armed with a black rifle.  The male was last seen driving away in a grey four door vehicle.

The Emory spokesperson confirmed the security alert and its contents. Emory’s alert also said something similar had happened at Suburban Plaza.

According to Emory’s alert, “When Police responded to investigate [the Decatur Square incident], … it was discovered that a similar incident was reported at Suburban Plaza, across the street from Emory Decatur Hospital.”

DeKalb Police said Monday, Dec. 2, there were no reports of anything similar occurring at that location.

Here is the full alert that Emory Healthcare sent to its employees: 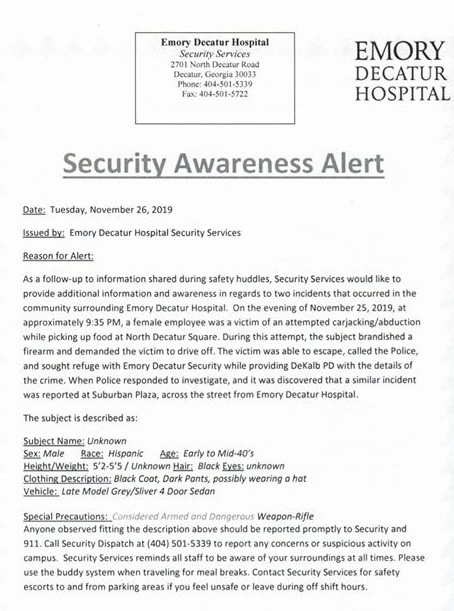 This story will be updated if more information becomes available.