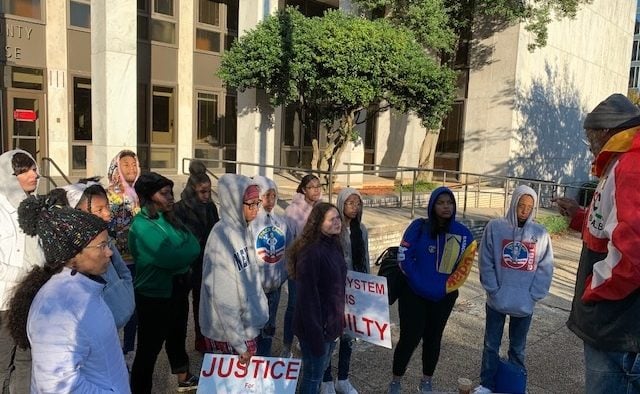 FILE PHOTO: A group of Decatur High School students led by the Black Student Union (BSU) walked out of school and went to the DeKalb County Courthouse to demand Justice for Anthony Hill. Image provided by Mawuli Davis
Share

Former DeKalb County police officer Robert Olsen on Friday, Nov. 1, was sentenced to serve 12 years in prison in connection with the shooting of Anthony Hill in 2015.

On Oct. 14, a DeKalb County jury found Olsen not guilty on two counts of felony murder, but jurors did find Olsen guilty of aggravated assault, two counts of violating his oath of office and one count of making a false statement.

Hill, an Air Force veteran, was unarmed and naked when he was shot by Olsen. His family said he was having a mental health crisis at the time.

Olsen is white; Hill was black.

Olsen received a 20 year sentence. After 12 years, he will serve the rest of his sentence on probation. Prosecutors asked for a sentence of 30 years, and asked Olsen serve 25 in prison.

“While we were hoping for a lengthier sentence, a measure of justice has been served today for Anthony Hill and his family,” District Attorney Sherry Boston said. “A uniform, badge, and gun are not a license to shoot with impunity. Robert Olsen had non-lethal options that he could have employed, but he made a different decision that day… one that cost a man his life. We are thankful he will be held accountable for his actions.”

Before the sentencing, a group of Decatur High Students led by the Black Student Union walked out of school and went to the county courthouse “to demand justice for Anthony Hill,” attorney Mawuli Davis said.

“We came hoping that our presence sends a message to the jurors, judges, lawyers, officers and everyone going in and out the courthouse that the youth care that our justice system takes responsibility for their actions and acts according to the law,” said DHS Student Daxton Pettus, Black Student Union Co-President. “We want them to abide by the very words we hear in the morning everyday; liberty and justice for all.”

Editor’s note: Portions of this story were provided by Decaturish content partner WABE.