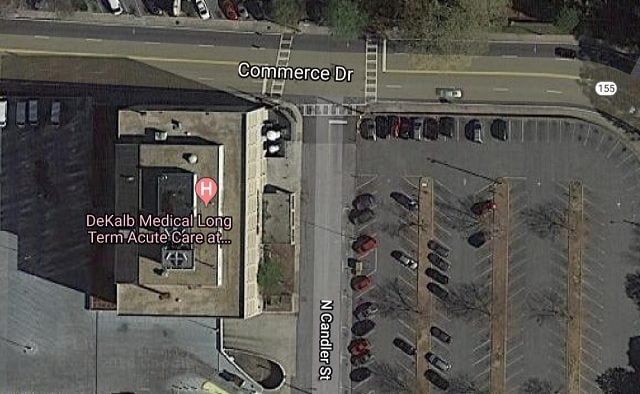 The family of Judith Merlin has filed a lawsuit against the city of Decatur, the Georgia Department of Transportation and engineering firm GCA claiming that obsolete traffic signals led to her 2018 death while she was using a city crosswalk.

As part of a pre-suit demand to the defendants, the family estimated $15 million in losses.

The February 2018 incident occurred at Commerce Drive and North Candler Street, near the Decatur Kroger. Merlin was in the crosswalk crossing Commerce Drive. Angeline Holcombe was exiting the Kroger parking lot in her vehicle and making a left turn onto Commerce Drive when she struck Merlin.

Holcombe, who was 84 at the time of the incident, later pleaded guilty to second degree homicide by vehicle, court records show. She was fined $1,344, ordered to perform 240 hours of community service, had her license suspended and received 12 months probation.

The suit alleges that Decatur has admitted its traffic and pedestrian signals are “out of date” and “obsolete.”

“A GDOT plan to replace the outdated and obsolete traffic signals in downtown Decatur, including the signals at the Intersection, has been promised since no later than 2006 but has never been implemented,” the lawsuit says.

The suit alleges that within weeks of Merlin’s death, Decatur directed GCA to extend the crosswalk time for pedestrians to cross Commerce Drive, replace the traffic controller and add a “leading pedestrian interval.”

“An LPI gives pedestrians a several second head start to cross the street before allowing vehicles to begin turning onto Commerce Drive and ensures drivers are stopped when pedestrians begin crossing the street,” the lawsuit says.

The improvements cost the city $1,500, the lawsuit says.

The lawsuit says these are problems the city and GDOT has known about for years before Merlin’s death.

“Years before Ms. Merlin was killed, a pedestrian advocate suggested to Decatur that it implement LPIs in downtown Decatur,” the lawsuit says.

The lawsuit also says following Merlin’s death, GDOT “acted to correct the danger to pedestrians in Downtown Decatur by planning and executing a light re-timing project for the entire downtown Decatur area.”

According to the lawsuit, Decatur and GDOT could’ve prevented Merlin’s death “with minimal effort, time and expense.”

An attorney for the Merlin family declined to comment. GDOT, the city of Decatur and GCA have filed responses denying the claims.

“The city of Decatur is a nationally recognized model for building safe pedestrian and bicycle facilities and for encouraging its residents and visitors to lead active, healthy lives,” Arnold said. “Sadly, the late Ms. Merlin was killed when she was struck by a motor vehicle while crossing the street. The driver of the vehicle was found guilty for this tragic accident in a court of law. The city is not at fault for this unfortunate accident and is vigorously defending itself in this litigation.”