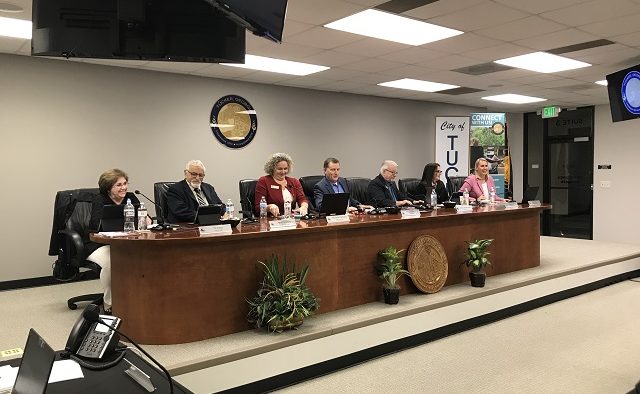 Atlanta developer John Wieland made an appearance at Tucker City Council on Nov. 25, in support of his future project at LaVista and Midvale roads.

Wieland has built more than 30,000 homes in Greater Atlanta over the last 40 years. This will be his first development in Tucker, but some Tucker residents do not share his enthusiasm for the project.

Wieland and developer Stephen Ficarra of Betancourt Construction, LLC are teaming up to build 63 single-family homes on 22.5 acres of land at 4700, 4704 and 4738 LaVista Road and 2470 Henderson Road in Tucker. Currently the land holds four single family homes, built between 1948 and 1962.

At the Nov. 25 City Council meeting, Betancourt Construction presented a first read of the Special Land Use Petition (SLUP) to change zoning on the project site from R100 and R85 to R75 and R60, reducing lot size and increasing the number of dwellings. If the SLUP passes as is, density of the property would be 2.8 units per acre.

The majority of homes on adjacent streets are zoned R85, like the property of neighbor Lexi Hoefer, who attended multiple meetings about the Betancourt development. She is concerned about the process of the development, sewage, and city infrastructure.

Hoefer said, “A lot of the community and neighbors of this proposed project don’t feel like they’re being heard. Some of our neighbors didn’t even come tonight because they felt like, ‘What’s the point if we’re not going to be heard by the city?’”

“We are not opposed to any development, but 63 homes is too many for that space … I urge the city council to vote on this project as if it is in your backyard, as it affects your traffic, and your neighborhood’s infrastructure, sewers, water, etcetera,” Hoefer added.

A Tucker resident for 48 years, Linda Trotter said she has seen major changes in Tucker but wants lots larger than R60 for new families moving into the city. “We are still here in Tucker. And I’ll be here as long as I can,” she said.

A second read for Betancourt Construction will be held at City Council on Tuesday, Jan. 14, 2020 at 7 p.m. with a public hearing for residents to speak for or against the proposal.

Timeline for the Betancourt  development:

Sept. 11: SLUP came before Tucker Community Council with concerns about wildlife, water runoff, impacts on schools, increased traffic and price point of homes. Closed circuit TVs were set up to accommodate overflow of residents who spilled into the hallway. Community Council urged Betancourt to continue meeting with neighbors.

Jan. 14, 2020: Second read of SLUP at City Council with public hearing. Note: This meeting is on a Tuesday.

Editor’s note: Courtney Smith’s title with the city has changed. This story has been updated to reflect Smith’s new title.