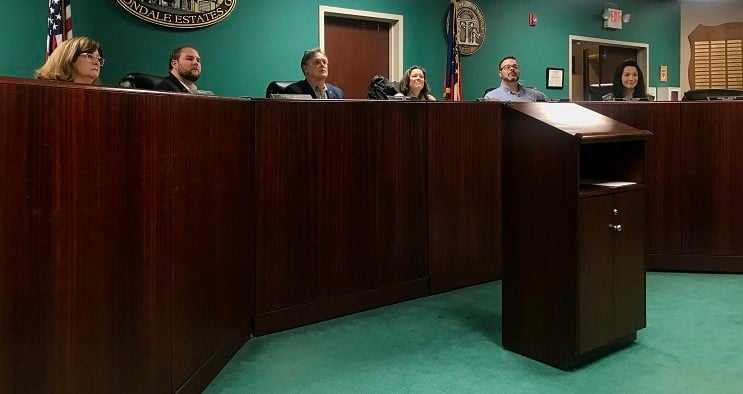 The Avondale Estates City Commission met for its last regular session of the year on Monday, Dec. 16. The City Commission approved the Town Green design firm, added a street grid to the Downtown Master Plan and became a member of Welcoming America.

The board approved Fabric Developers’ selection of design firm Site Solutions to complete the design of the Town Green. The Town Green will be located on property owned by the city along North Avondale Road.

Commissioner Brian Fisher said this is a great start and an exciting first step.

“The thing that’s exciting about this is that this starts public process to actually go from a concept … to a design that we can give to people to actually make plans and to cost out for and so forth,” he said.

He also added that the community will be asked for input on what it would like to see and what they want to be in the park.

Site Solutions and the city will now work together to develop a public process for the design of the park, and they have 45 days to develop the plan, City Manager Patrick Bryant said.

Additionally, the board approved a resolution to add the proposed street grid to the Downtown Master Plan and Comprehensive Plan.

“It essentially includes two things. The layout for the proposed street grid, so the actual places where the streets will be, and then the type of street that will be built,” Bryant said in a phone interview.

The resolution was adopted as a guideline for the city while they work to rewrite the zoning code.

Here is a picture of the street grid the commission approved (for a larger version with street names that are easier to read, click here and scroll to page 21): 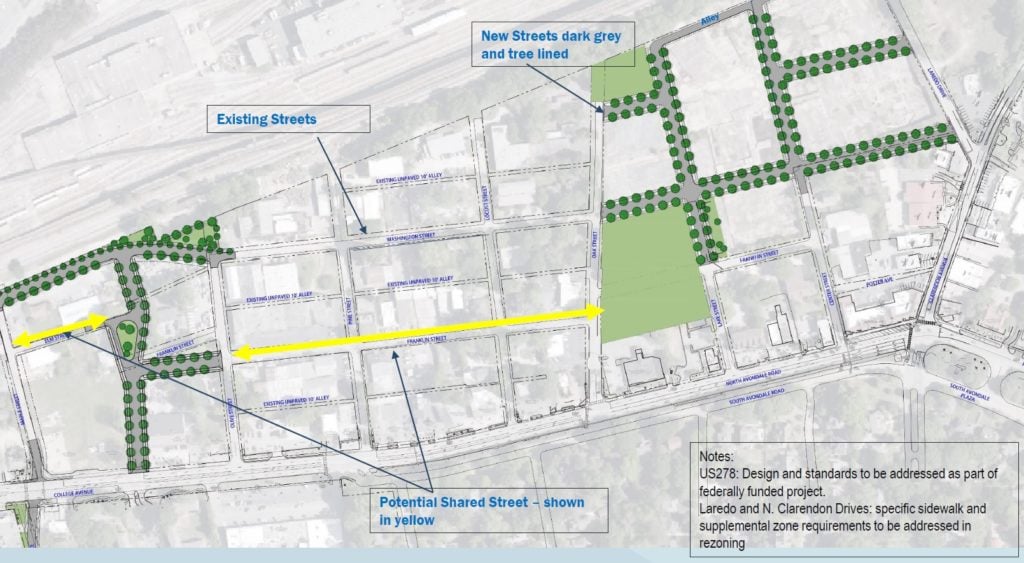 Image obtained from the city of Avondale Estates.

The commission also discussed the possibility of making some streets shared — meaning they could be used by cars, pedestrians and cyclists — but did not make that decision at Monday’s meeting.

In other business, Commissioner Adela Yelton introduced a resolution for the city to participate in the Welcoming America program.

Welcoming America is a non-profit, non-partisan organization that supports many diverse communities. The organization provides the roadmap and support a community needs to become more inclusive toward all people and residents, according to their website.

The resolution aims to foster “a welcoming environment for all individuals, regardless of race, ethnicity or place of origin, enhances the City of Avondale Estates’ cultural fabric, economic growth, and overall prosperity for current and future generations,” the resolution says.

It also promotes community efforts like civic dinners, education and gatherings to promote understanding and collaboration within the community.

Yelton said the Downtown Master Plan and Comprehensive Plan have language about being welcoming and inclusive and this is an opportunity to put those words into action.

“We don’t have to recreate the wheel on a lot of these activities. I think we can infuse a lot of welcoming approach and language into what we’re already doing as a city in downtown, in the community,” Yelton said.

The resolution also creates an Ad Hoc committee to focus on the welcoming and inclusive activities.

Commissioner Lisa Shortell added that she thinks the program will promote connectivity and civic engagement among everyone.

She also agreed with Yelton about having the inclusive language in the Downtown Master Plan and Comprehensive Plan and said the “program will give us some structure to help put some flesh on that skeleton of words.”

This meeting also marked the last regular session meeting for Yelton as she steps down as commissioner. All the commissioners, the mayor, the city manager and the city clerk thanked Yelton for her service.

“We started together. That was four years ago, we came into office together not necessarily knowing what to expect. I’m proud of what we accomplished,” Fisher said.

Fisher also mentioned the different strengths Yelton brought to the board that they didn’t have before.

Yelton will be missed but Fisher said her mark on the city will last for a long time.

“I think as you go through our downtown, you’ll be proud of all the things we’ve accomplished with the rest of us and the rest of our citizens,” Fisher said. “I couldn’t have been prouder to say that I’ve served with you over these last four years.”

Shortell said the three words she thinks of when thinking of Yelton’s many contributions are process, personnel and perspective.

“Adela’s been responsible for the words ‘good process’ becoming something we all strive for rather than something we groan at,” Shortell said.

She also mentioned that the board is a team that works to see the city thrive and prosper.

“I really appreciate Adela’s ability to look at the big picture, her thoughtful approach to dissenting opinion,” Shortell said. “I appreciate that even when big change doesn’t happen immediately, she values baby steps over no steps at all.”

The next City Commission meeting will be at 6 p.m. on Jan. 6 at City Hall, 21 N. Avondale Plaza, to swear in new commissioner Dee Merriam.