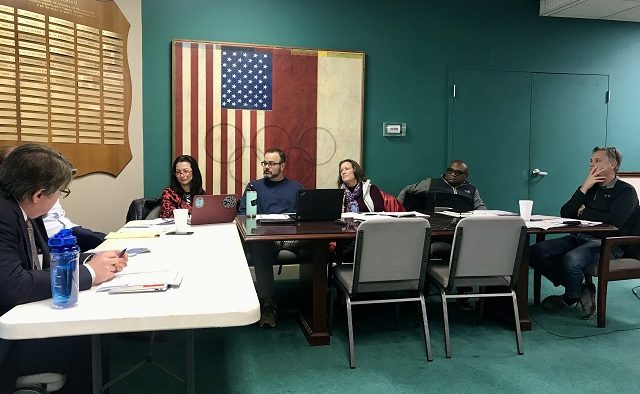 The Avondale Estates City Commission met Dec. 11 to hear a presentation from Fabric Developers on the design firm they selected for the city’s Town Green project. The City Commission also discussed the street grid project and potential changes to the sanitation ordinance.

The Town Green will be located on property owned by the city along North Avondale Road.

As stated in the memorandum of understanding, Fabric Developers worked with their architectural firm, Stevens and Wilkinson, to present their selection of a design firm for the Town Green project to the City Commission.

Fabric chose Site Solutions for the project based on the criteria provided by the City Commission and the Downtown Development Authority.

Site Solutions has worked on several projects in Atlanta, Savannah and Alpharetta. These projects include the Historic Fourth Ward park and the Andrew Young tribute in Atlanta.

Jerry Miller, founder of Fabric Developers, said they were looking for a design firm that understood the context and ramifications of the project. During the interview process, Fabric looked for the dedication of the people assigned to the project.

Miller said all involved in the process understand that this project is a community venture.

Ron Stang, principal and chairman of Stevens and Wilkinson, said when they visited Site Solutions’ office there were drawings on their table and in their presentation. Site Solutions had taken pictures and walked the site.

“They didn’t want to disturb what everybody had looked at already out here, but they gave us some different ways to think about things. I think they’ll bring a lot of that to the table and into the community,” Stang said.

Stang also said that the principals on the project, Eric Bishop and Kevin McCarthy, are both committed to being involved.

All of the commissioners, Mayor Jonathan Elmore and City Manager Patrick Bryant were excited by this step of the project, noting that it has taken a long time to get to this point.

Commissioner Adela Yelton mentioned that she has been a commissioner for four years and the board has talked about this project throughout her tenure.

The city worked with Brad Jones from Pond and Company to look at the two street grids proposed in the Downtown Master Plan.

“[Pond and Company] were asked to evaluate that and propose back a street grid network, look at the characteristics of that street grid and help us define what those are, put some cost numbers associated with that and put some phasing to that as well,” said Shannon Powell, a consultant who has worked for the city since September.

The proposal looks at criteria such as walkable block sizes, connectivity through downtown, accommodation of various modes of transportation and incorporating on-street parking.

Jones and Powell took cues from the historic neighborhoods to make sure that was reflected and there is connectivity between downtown and the neighborhoods, Powell said.

One example mentioned was to incorporate the black and white street signs throughout downtown.

Jones also used historic precedents, as well as the neighborhoods, to help think about the street network.

“Looking at the right of ways, looking at on-street parking, looking at the landscaping which becomes a really important aspect to what the recommendations [are] and how we’re recommending that we move forward with this project,” Powell said.

The street grid proposes building new streets, but also looks at ways to address existing streets that may be narrower than the proposed 60 feet needed for the new streets, landscape strips and sidewalks.

One option mentioned was the opportunity to create a shared street that vehicles, bicycles and pedestrians would be able to use. Powell said this option would depend on where the street is located, but it would be a way to deal with the limited right of way on some streets.

The plan also created the opportunity to add more smaller parks throughout the area.

“Then out of that came a number of different little pocket Park opportunities which, again, I think, provides an opportunity to create something that’s uniquely Avondale and captures and taps into that spirit that embraces landscaping and you see how that begins to define those areas,” Powell said.

In other business, City Manager Bryant discussed revising the city’s sanitation ordinance to potentially change the fee assessed for sanitation services and to make the services more efficient.

Bryant said that last year when the city assessed the sanitation program, they found that the general fund was subsidizing a portion of the cost of sanitation services.

The costs also seem to be arbitrary and didn’t account for the actual service provided, Bryant said. The city found that routinely commercial entities were getting more service than residential homes. But the cost was being subsidized by the residential fee, so commercial entities weren’t paying their fair share for the services received, Bryant said.

“In addition to that, we were incorporating the fee as a component of a property tax bill. So, we weren’t even establishing the fee until July, we weren’t assessing it until September, not receiving it until after that. So, the general fund was essentially funding most of the sanitation service for the bulk of the year,” Bryant said.

Bryant mentioned other changes that could be discussed but said that the City Commission needs to address the fee and billing issue first.

Deputy City Manager Paul Hanebuth suggested moving to a per can fee rather than a per parcel fee.

He suggested a yearly per business fee of about $900 for the first can and then an additional $190 for each can past the first that the business requires.

The goal of the change is to be as equitable as possible, Bryant said.