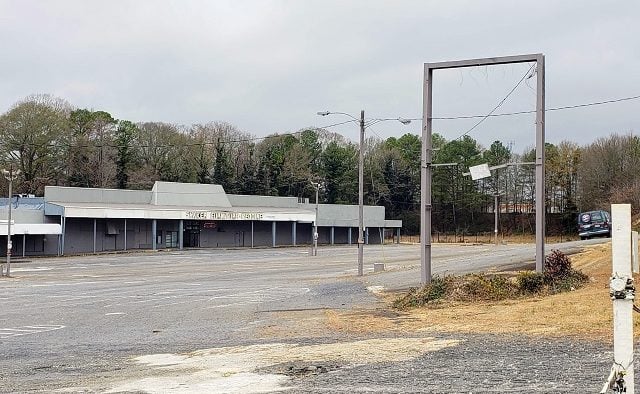 The Shaker Furniture property at 1395 Columbia Drive in greater Decatur has been a crumbling eyesore for decades, neighbors say.

Wayne Powell, who lives in the area, said he personally knows of three neighbors who moved because of the problems with the 13.9-acre site. By his reckoning, the property — built in 1976, according to tax records — has been unsightly for as long has he’s lived there. But the increasing development in Belvedere Park is increasing pressure on the property owner to clean up or sell the space.

Powell was one of more than a dozen people who attended a Dec. 10 hearing on code enforcement violations filed against the property’s owner, Abraham Asher. Attempts to reach Asher have been unsuccessful.

According to records released by the county, Asher faces three different code violations:

– Not being zoned for storage

– Having an abandoned, disabled truck on the property and trash in the rear of the building

According to people at the hearing, this is the first time this property has been cited. It’s not clear how the property is currently being used. A listing on Google says that the Shaker Furniture business is open, but when a reporter visited on Dec. 10, there was no visible activity on the site. A sign advised that it was private property and said, “No trespassing.”

Thomas Kemp, a senior assistant solicitor with DeKalb County, told the people who attended the hearing about Shaker Furniture that the county will try to work with the property owner to clean up the site.

“I understand this is a nuisance and an eyesore in the community,” he told residents.

The owner could face fines, probation and perhaps jail time for failing to comply, though Kemp thought jail time was unlikely.

“I know y’all have been living with it for decades, so please bear with me,” he said.

Larry Rucker, a county resident who has an interest in the case, recognizes that there’s only so much residents can achieve by going through code enforcement.

“There’s a limit to what they can do,” Rucker said. “The biggest thing [Kemp is] going to be able to do is give this guy notice that people are paying attention and people want you to do something.”

Kevin Polite, a local Realtor, said in the right hands that property could be the catalyst for a transformation along Columbia Drive. He said the property likely wouldn’t have been cited at all without some advocacy from DeKalb County Commissioner Lorraine Cochran-Johnson.

“We’re in a relate state market where you could get top dollar,” Polite said. “As a real estate professional, myself, I can’t understand why he wouldn’t sell.”