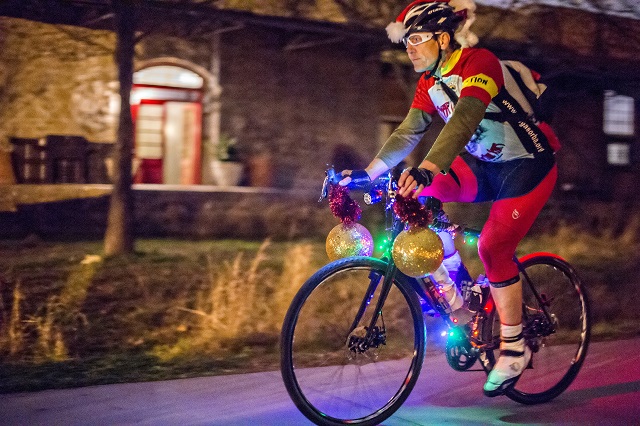 Looking for a New Year’s resolution? How about driving less? Leaving your car at home makes you healthier and happier, and it’s one of the best things you can do to help forestall a climate catastrophe.

Cars are one of our most significant sources of greenhouse gasses. A gallon of gas produces twenty-four pounds of carbon dioxide, which means that an average tank produces enough to fill two kids’ bedrooms with the stuff. If you’re a typical American driver, you release around 15,000 pounds of CO2 every year. Electric vehicles also produce significant emissions, because two thirds of US electric power comes from fossil fuels: 9,000 pounds of carbon dioxide per year for the average driver (less for a Leaf, more for a Tesla). That’s not much better than a gas-powered car. So driving less is one of the best ways we can decrease our carbon emissions.

What’s more, you’ll end up enjoying your commute more. I started walking and riding my bike to work out of concern for the environment but ended up far preferring active commuting. I’m healthier and more relaxed, and I’ve lost weight. Humans aren’t meant to sit as much as we do. Sitting in a car fuming about traffic is particularly unpleasant – and bad for you. If you’re getting to your destination under your own power, you can work off your frustration. If you take the train or the bus, you offload the stress of traffic to someone else, leaving you free to read James Patterson or play Polytopia on your phone.

The easiest way to drive less is to combine driving with walking. Choose a place to park your car a mile or so from work. If you’re like me, you’ll soon find you want more distance. In my case, it took some experimentation to find a parking place that would afford the most pleasant route, but soon I was happily tramping along.

I’ve had less experience with public transit but have usually been impressed by MARTA, whose trains are smooth and whose buses are generally clean and new. I’ve found their online trip planner very useful, and the MARTA app has been much improved since its introduction, providing departures and arrivals in real time.

But my favorite way to get around Atlanta is by bike. You’ve probably noticed more and more people pedaling around the city, and that’s because Atlanta has, quite suddenly and unexpectedly, become a great place for biking. There are more and more safe bike routes (thank you Beltline!), and drivers are increasingly polite and aware.

One key to a happy bike commute is a good route, so plot a course in advance, identifying the most pleasant streets. Bike commuters talk about routes like drivers talk about traffic, and you’ll get great advice by posting a query on the Facebook Page “Bike Commuters of Atlanta,” whose 4,500 members are always happy to share advice and tips.

It can be hard to make a change, especially when you have kids who need to be places. But don’t forget that children also benefit from active transportation. Kids who walk or bike to school concentrate better than those who are driven and report higher levels of well-being. Kids who are too young to bike by themselves love getting in a bike seat, and it’s never too early to teach kids about the benefits of an active and eco-friendly lifestyle. Who said New Year’s resolutions were just for adults?

Good habits may seem hard to forge, but there’s a simple rule: It takes two times to make a habit and two times to break a habit. If you resolve to drive less at least one or two days each week, you’ll find yourself happier and healthier, and you’ll decrease your carbon footprint.

– Tonio Andrade is co-founder of the Decatur Bicycle Coalition, a bicycle and pedestrian advocacy organization based in Decatur, Georgia.