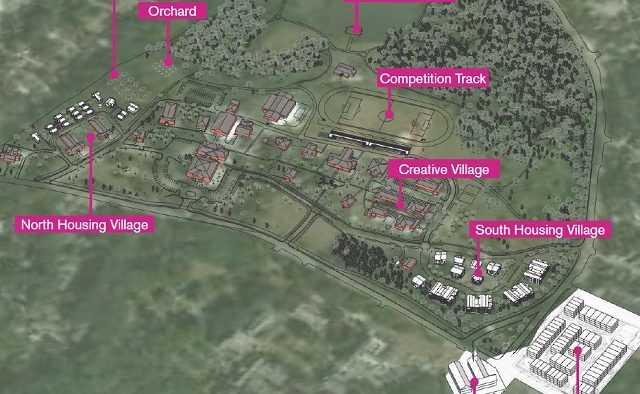 This image shows the location for affordable housing concepts at Legacy Park. Photo obtained via the city of Decatur
Share

The Decatur City Commission on Monday, Dec. 16, unanimously approved an addendum to the Legacy Park Master Plan that covers the planned development of two housing villages on the property.

Legacy Park is the new name for the property formerly known as the United Methodist Children’s Home. Decatur bought the property in 2017.

The housing addendum, prepared by planning consultants Cooper Carry and The Bleakly Advisory Group, details the types of housing that the city hopes to build there and what the expected financial commitments for the city will be.

“We expect that the Legacy Park board will be able to use this part of the plan in a future [request for qualifications] RFQ or [request for proposals] RFP process as they look for potential development partners,” Decatur Planning and Economic Development Director Angela Threadgill said. “This is more of a framework for setting expectations for what we would want to see from a development partner.”

The Decatur Planning Commission voted to recommend the addendum at its meeting on December 10.

The Legacy Park Master Plan calls for the inclusion of two separate affordable housing “villages” on the property. The new housing addendum specifies the location and types of housing that will be allowed in each village.

The North Housing Village concept calls for a combination of new single-family and duplex cottages, with each unit no greater than 1,500 square feet and a building height limit of 25 feet. The historic Sam Bell and Glenn buildings that are already there would be renovated and could provide an additional 16 co-housing units.

The South Housing Village concept calls for a mix of walk-up flats, multiplexes and duplexes that could support up to 130 units. For the South Village housing, the multiplexes could contain up to 25 units in a four-story building, with a building height limit of 50 feet. The walk-up flats would be buildings with four to eight units in each, limited to three-story buildings with an overall height limit of 40 feet. Duplexes could be up to two stories, with a 35-foot height limit, and 2,800 square feet per unit.

The North Housing Village is smaller and designed to fit in with the adjacent neighborhood comprised mostly of single-family homes, while the South Housing Village would be larger and more dense as it would face the new townhome development that is under construction across the street at the intersection with Katie Kerr Drive.

Both concepts call for a mix of rental and owner-occupied units.

As noted during previous discussions of the park housing plan, construction of the developments will require a significant financial commitment from the city.

“Almost all of our housing in the United States, including affordable housing, is built by private developers. So you have to expect that a private developer is going to want to show up and build this,” Geoff Koski, president of The Bleakly Advisory Group told the commission. “And the private sector is going to do so because there is a profit motive there. They can’t show up and build it just to break even.”

The cost analysis performed by Koski’s group started with the assumption that the city would donate the land to begin with, he said. And, they should consider funding the initial infrastructure development – land clearing and installation of sewer and water lines, for example–that would allow the builder to just come in and build from the ground up.

Those costs would likely be around $2 million minimum for both villages.

In order to keep rental rates and sales prices affordable, the units would still require significant subsidies over and above the initial land and infrastructure costs.

“The subsidies could come in a lot of ways,” Koski said. “Obviously the infrastructure costs and the land are subsidies themselves. You could also let the developer build smaller units and maybe more units because they can get a higher price per square foot for those [smaller units].”

Another option is the federal Low Income Housing Tax Credit (LIHTC) program that gives private investors tax credits for investing in affordable housing. Obtaining funding through that program is a possibility for the city, but the program is very competitive and has a lot of reporting requirements.

There are other sources of private funding, including charity and nonprofit groups that might support these projects as well.

Some funding sources also allow you to average the rental rates or sales prices for the whole development to meet the affordability threshold. So, for example, some units could be rented at market rate and that would support a certain number of units at more affordable rates, as long as the average price across the development met the affordability target — for example, affordable to people making 60% of area median income (AMI).

If that strategy is used, Koski estimated that 10 percent of the built units would meet a criteria of 80 percent of AMI or less with the rest of the units at market rate.

Mayor Patti Garrett expressed concern that reducing the size of the individual units might save the city money, but also might result in there being no affordable housing that was suitable for some of the key groups of people that need it.

“If we start looking at more small units, like 750 square feet, are we really meeting the needs of who we say we want to include?” she asked.

Koski agreed that was a potential issue and said the commission might have to decide whether it wanted to prioritize housing for families, for example, or whether it just wanted to get the most affordable housing on the site that they could.

“So so these are kind of the decisions that, if and when you decide to take this out for RFP, these are the kinds of things that I think you would want to be pretty clear about up front: Here are our goals. Here’s how we expect to achieve them. Here’s the level of affordability we want to get to, etc.”

– The Commissioners voted unanimously to amend the Unified Development Ordinance Article 10. Buildings and Fire to conform to the requirements in the current International Existing Building Code (IEBC). Many jurisdictions nationwide base their municipal codes on the IEBC, including the City of Atlanta and Athens-Clarke County.

– Appointed new members and reappointed others to serve on several city advisory boards, including the Decatur Development Authority (DDA), the Zoning Board of Appeals (ZBA) and the Planning Commission. A full list of appointments is available here.

You can watch a video of the City Commission meeting here and download a copy of the Housing Addendum and other materials discussed at the meeting here.