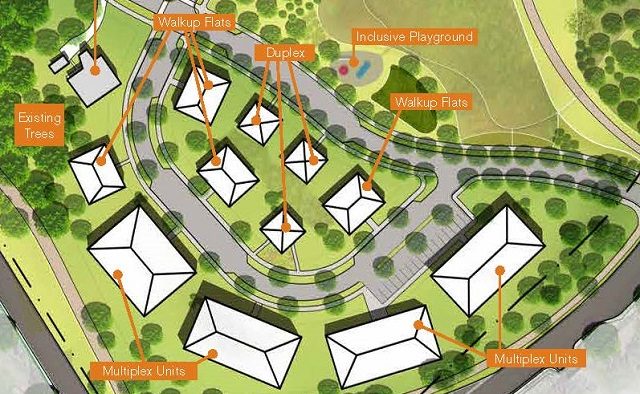 A drawing from the proposed Housing Addendum to the Legacy Park Master Plan shows what types of buildings and amenities could go in the South Village near the intersection of Katie Kerr and South Columbia Drive. Buildings depicted in gray are existing buildings that would be renovated. Buildings in white would be new construction. Credit: City of Decatur.
Share

At its meeting Tuesday night, Dec. 10, the Decatur Planning Commission voted unanimously to recommend that the city amend its master plan for Legacy Park by adding a supplemental housing study. The study would guide development of the affordable housing options planned for the two housing villages on the site.

The study, performed by planning consultants Cooper Carry, more clearly defines what kinds of housing options the city wants to see in those areas and what the requirements will be, said Angela Threadgill, the city’s director of planning and economic development.

A report on the study’s findings was previously presented to the City Commission during a work session in July, she added. Now that the property has been officially annexed into the city and given the appropriate zoning and land-use classifications, it is a good time for the housing information to be added to the park’s overall master plan.

“This will help us as we go through the process of getting qualifications [from developers] and requests for proposals,” Threadgill told commission members.

Cooper Carry helped the city develop the overall master plan for Legacy Park, which was adopted last December, and then did a “deeper dive” into the affordable housing issue. The firm solicited community and neighborhood input about the kinds of housing city residents hoped to see there and who they thought the housing should be for, said Alison Bickers, the lead Cooper Carry associate working on this project.

“The response we received indicated strongly that medium-density development was preferred, in order to preserve the feel of the existing campus and to be consistent with the surrounding neighborhoods,” she added. “People also indicated that they wanted to see adaptive re-use of the housing currently there on the site.”

The consultants also examined data about the availability of affordable housing in Decatur to make their recommendations.

By using data collected by the U.S. Census’ American Community Survey and by the U.S. Department of Housing and Urban Development, the consultants determined that Decatur’s greatest gap in availability of housing is for people with incomes above 30 percent of the area median income (AMI) but below 60 percent of AMI. These are the people who make too much money to qualify for subsidized housing or rental assistance but cannot afford housing at current market rates. The current AMI for the Atlanta area, including Decatur, is $79,700 for a family of four.

And, a notable percentage of people making below 30 percent of AMI were still cost-burdened. But for people in the middle range of above 30 percent of AMI and below 60 percent — such as teacher’s aides and school maintenance workers — there was often no suitable housing available. And a mid-career teacher with a master’s degree making 80 percent of AMI would only be able to afford a 540 square-foot apartment.

“Rental housing is the area of greatest need,” Bickers added.

After getting feedback from both community members as well as stakeholders with experience in developing affordable housing in the Atlanta area, Cooper Carry and their subcontractor, The Bleakly Advisory Group, refined the concepts for the North and South Housing Villages for the master plan.

The North Housing Village concept calls for a combination of new single-family and duplex cottages, with each unit no greater than 1,500 square feet and a building height limit of 25 feet. The historic Sam Bell and Glenn buildings that are already there, would be renovated and could provide an additional 16 co-housing units.

The South Housing Village concept calls for a mix of walk-up flats, multiplexes and duplexes that could support up to 130 units, depending on bedroom count and unit size. For the South Village housing, the multiplexes could contain up to 25 units in a four-story building, with a building height limit of 50 feet. The walk-up flats would be buildings with four to eight units in each, limited to three-story buildings with an overall height limit of 40 feet. Duplexes could be up to two stories, with a 35-foot height limit, and 2,800 square feet per unit.

The North Housing Village is smaller and designed to fit in with the adjacent neighborhood comprised mostly of single-family homes, while the South Housing Village would be larger and more dense as it would face the new townhome development that is under construction across the street at the intersection with Katie Kerr Drive.

Both concepts call for a mix of rental and owner-occupied units.

A key challenge for the city will be the cost of adding affordable housing developments to the park. Developers of market rate housing recoup their costs and then turn a profit when they sell or rent out their developments. With the rent or sale price of the housing constrained, affordable housing developers don’t expect to see as much of a profit, but still need to see some, as well as cover the cost of construction.

The cost analysis done by Cooper Carry and The Bleakly Advisory Group found that building out these concepts and keeping them affordable would require significant subsidies and likely some participation by the city.

“That doesn’t mean it will all come out of the general fund,” Bickers clarified. “There are a number of ways to skin this cat. It all comes down to what development partners you will end up working with. And there are a number of different options [for financing].”

The report predicts that the city will have to foot the bill for the initial infrastructure — building out the roads, water and sewer lines, etc. in order to attract developers willing to work on this. Those costs are estimated to be around $2 million. Further, the analysis also assumes that the city — which owns Legacy Park — will provide the land for free.

Even so, the developments will still require significant subsidies to just get to the 80 percent AMI threshold, let alone the 60 percent AMI and below, which has been the goal.

“That’s where finding the right development partner will come in,” Bickers told Decaturish after the meeting. Affordable housing developers often have to manage numerous different funding sources, she said. The most popular and well-known is the federal Low-Income Housing Tax Credit program, but there are others, including other public programs, but also private charitable trusts, mission-driven investment funds and other sources.

“It all depends on the developer’s business model and relationships. The way that an entity like the Decatur Housing Authority approaches a project compared to [private affordable housing developer] PadSplit does is very different,” she said.

The Bleakly group worked on a cost analysis for an affordable housing development in Asheville, NC, that has 18 different funding sources. Attracting a good development partner, with the right experience and relationships, who is also willing to take on the project, will be key, she said.

During the discussion, Planning Commission member Todd Ohlandt questioned whether increasing the density and number of housing units should be considered in order to reduce the amount of subsidy that would be needed.

“I know that you said medium density was the preference stated, but obviously, the broader the scale and more units we have, the more affordable it would be for the developer,” he said. “How is that balance determined?”

Threadgill clarified that the term “medium density” might seem confusing in the context of the entire 77-acre park property and then only planning an estimated 171 total housing units. The consultants, working with planning staff, focused on designing a plan that incorporated denser, multifamily housing options that were similar in scale to that of the surrounding residential areas.

“In thinking about medium density, we focused more on the scale and building height and massing,” she said.

Bickers added that Cooper Carry tried to balance the community requests for housing designs that would fit in with other nearby residential, as well as the overall park, with the need to get as many units as they could.

“Certainly, I think housing advocates would like to see more units,” Bickers said. “But I think that the parameters that we have set forth, with the required building setbacks and spacing and mass and height restriction, are things that the community has spoken to.”

Now that the Planning Commission has recommended the addendum, it will be considered for final approval at the next City Commission meeting on Monday, December 16. You can read the entire proposed addendum here.