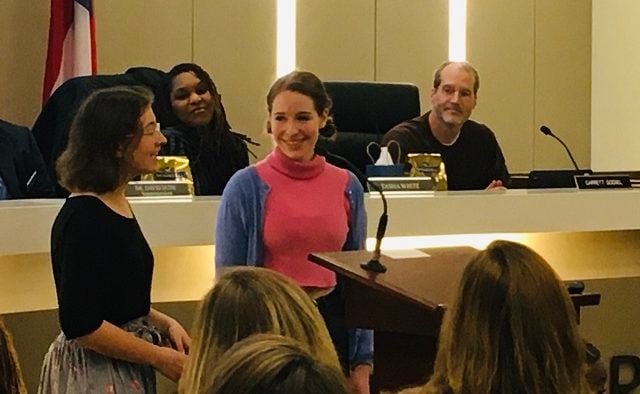 The City Schools of Decatur Board of Education’s December meeting was the last one for Garrett Goebel after eight years of service on the School Board.

The meeting began with a performance of “Some Things Are Meant to Be” by Decatur High School students Zoe Stephens and Laura Walsh, accompanied by Dr. Elise Sparks, and a short reception.

Superintendent Dr. Dude and fellow board members Jana Johnson-Davis, Heather Tell, Lewis Jones, and Tasha White spoke at length about Goebel’s helpfulness to others on the board, especially when they were attempting to grapple with complex data.

Former board member Annie Caiola also spoke, saying “Any time we had a difficult issue that faced the board, you were always very good at trying to see things from all angles and from everybody’s perspective.I think the way that you approached challenges that faced the district was thoughtful, measured, rational, and compassionate.”

Goebel was visibly moved, saying, “We are so much more together than we are individually. It’s been an honor and a privilege.”

The board discussed at some length forming a committee charged with discussing the future of the senior homestead tax exemption, including the possibility of a joint committee with the city of Decatur.

“We need to make sure we get the charge correct because it’s very easy for committees to go sideways,” warned Goebel.

Tell expressed concern about making sure the tax burden for residents is fair and that the school system’s other priorities, including competitive teacher salaries, are being met.

“We have to think about all groups,” said Tell.

During community comment, Mawuli Davis, speaking as co-chair of the Beacon Hill Black Alliance for Human Rights, expressed concern that a recent report indicated that achievement gaps at Renfroe Middle School were increasing rather than decreasing, in contrast to other schools in the district where achievement gaps held steady or improved.

In response, Dr. Dude said, “The state has let us know that there was an error in the formula for the middle schools, so we are waiting to see if that impacts our score or not and we can share more about that once we know.”

Dr. Kristy Beam, the principal of Glennwood Elementary, introduced speakers who described how the school is working on equity goals in three areas.

Dr. Ashleigh Igbokwe-Hamilton, who is the chair of the PTA’s Diversity, Equity, and Inclusion Committee, plans to have “Glennwood Dinners” to discuss equity issues similar to the “Decatur Dinners” already being held.

Amelia Copp, an EIP Intervention teacher at Glennwood, described a program followed by group discussions for the staff that included “Ten Myths White People Believe About Racism.” Michael Scott, a K-2 paraprofessional and several participants in the program, gave a presentation on Boys in Action, a mentoring program for minority children.

Decatur High School Interim Principal Wes Hatfield described how the school is collecting data on where students are going after graduation, with an eye towards helping current students prepare for their goals.

“We recognize that we don’t have enough data on students who are not attending college,” said Hatfield, but added that all students are encouraged individually to decide what their goals are after graduation, and that the program hopes to add more information about alternative paths in the future.

School Board member Tell said, “It’s important to recognize that not all students will go to a four year college, but they all need a plan.”