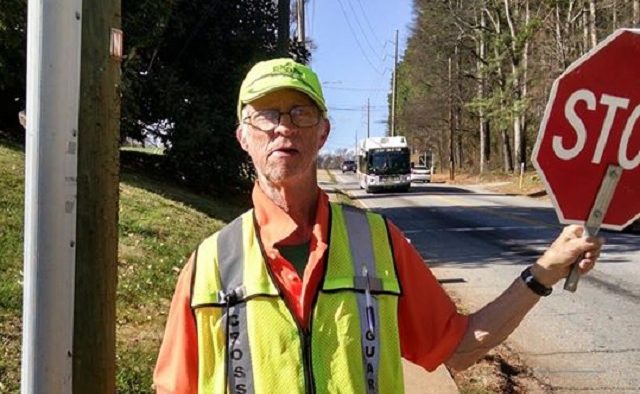 The Decatur Police Department cited a driver who struck Decatur school crossing guard Roger Schuppert while he was riding his bike on Sunday, Dec. 8.

“Lt. Clark and I visited him this morning,” Ross said. “His only concern is how soon he can get back to work and volunteering.”

The crash happened on Sunday evening at East College Avenue and Commerce Drive. Police responded to the call around 8:33 p.m.

Schuppert became a school crossing guard in 2017. He is also a Citizens Assisting Public Safety volunteer.

He’s an Air Force veteran who served in Vietnam.

“Nam wasn’t the hellhole I pictured it to be and I even got to know some of the local people,” Schuppert told a city of Decatur blog in 2017. “I shot no one and no one shot me and I came back in one piece and for, some reason, received the Air Force Commendation Medal.”

He worked at Georgia State University for 30 years and retired in 2003.

When he retired, he was looking for something to do and decided to become a part of CAPS.

“Its one of the greatest decisions of my life; it gives my life a purpose besides taking up space and using up food and water,” he said. “I love doing this work and I love this town.”