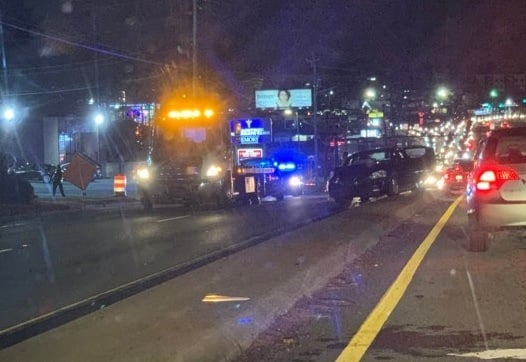 A photo of the accident scene in front of Cafe Istanbul. Photo provided to Decaturish.
Share

DeKalb Police on Sunday evening, Dec. 15, cited a driver for an improper U-Turn that caused a crash that blocked lanes in front of Cafe Istanbul.

According to the police report, the driver who caused the crash passed a field sobriety test at the scene.

Police responded to the scene at 1850 Lawrenceville Highway around 6:15 p.m. According to police, a Dodge Avenger was traveling eastbound on Lawrenceville Highway and a Toyota RAV4 was traveling westbound. The driver of the Dodge Avenger said the driver of the RAV4 made a U-turn in front of him, causing the crash, which the driver admitted. Neither of the drivers received any injuries. Both vehicles were damaged and were towed away.

The officer wrote that he smelled alcohol on the driver of the RAV4 and asked her if she would take a field sobriety test and she agreed.

She passed the test and was released at the scene with a citation for the improper U-Turn.