First Look: The Deer and the Dove and B-Side

First Look: The Deer and the Dove and B-Side 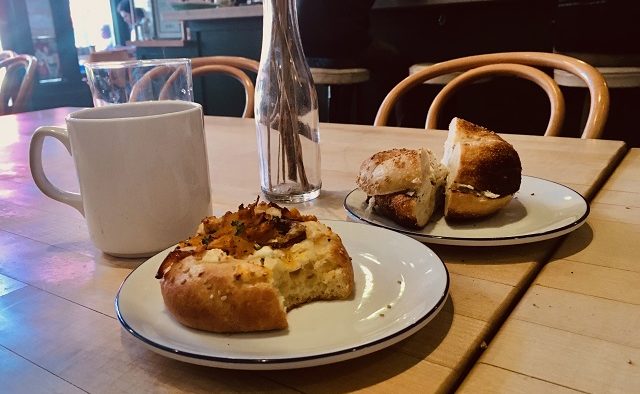 A bagel at B Side. Photo by Sara Amis
Share

The Deer and the Dove is the kind of place where you can get rabbit liver paté.

It’s also the kind of place where they have a kid’s menu and your child can get anything from plain to fancy, according to taste.

Terry Koval and his wife Jennifer Kapioski Koval did that intentionally, wanting an atmosphere that’s less formal and more friendly.

“It’s like a dinner party, where you have everyone over and sometimes they might bring their kids,” Jennifer said. One young patron came in and asked for ratatouille, after seeing the animated film, and shared it will her parents along with their duck.

“The name ‘The Deer and the Dove’ is the two of us,” Jennifer said, adding, “It’s representative of opening a new chapter.”’

She spent 25 years in retail and worked at Que and Pine Street Market, but sees this joint project with her husband as “the family business.”

Terry, who has a cast iron skillet tattooed on his forearm in homage to his grandmother, was chef and partner for Farm Burger and Wrecking Bar Brew Pub. He originally moved to Atlanta to become a chef. He opened The Deer and the Dove with his wife when the space came open after the departure of Cake and Ale, and recalls being “inspired” by the existing wood-fired oven.

“We built an open hearth as well. I love cooking over a fire,” Terry said. They chose to include the smaller coffee shop space next door, called B-Side. Both restaurants are located on the Decatur Square. The address is 155 Sycamore St, Decatur, GA.

I’ve yet to go wrong with anything I’ve eaten at The Deer and the Dove or the B-Side, from the familiar to the adventurous.

At the B-Side there’s a rotating cast of pastries baked fresh every day, doughnuts on the weekends, and prize-winning bagels (Best of Atlanta 2019, Atlanta Magazine). I had an acorn squash, caramelized onion, and goat cheese Danish that sat in a comfy spot between sweet and savory, and a benne seed bagel with smoked trout cream cheese schmear that was transcendent. It was somehow light and substantial at the same time, which is exactly what I want in a bagel. 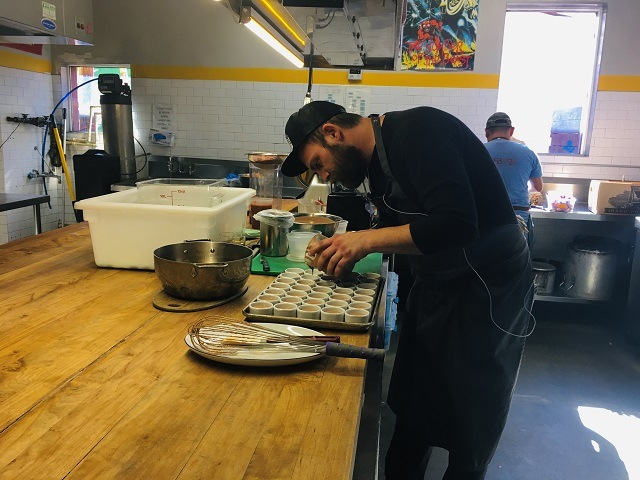 Happy hour cocktail specials in the main restaurant are Georgia gin and Georgia vodka drinks: Martinis, Cosmopolitans, and Gimlets made with 229 Gin from Americus and Commodore Vodka out of Savannah. I ordered a dirty martini which was definitely exactly what I ordered while staying light and crisp.

Bar snacks range from cozy fried onions and rolls to a more adventurous rabbit liver paté. Fortune favors the bold, as the shisito pepper jam makes the paté spicy and sweet while the liver flavor is mild.

The dinner menu is arranged thematically (Land, Sea, Air, Plants, Grain) rather than according to size or a preconceived notion of courses, which encourages you to sample and share. The menu changes as the seasons progress, so the “Harvest Plate” might have sweet potato one time, an heirloom squash another.

“Cheese From Our Friends” is outstanding among cheese plates, the weekly salad is leafy and cool with a very subtle dressing and the salted soft rolls are made with witchcraft. The pickled vegetables in the giardiniera speak to my country girl taste buds.

Most of the food is deceptively simple, but with a little something extra. There’s no attempt to show off with wacky taste combinations and the food is (with one notable exception) locally grown and raised.

“Our food is delivered by pick-up trucks, not semi trucks,” Terry said.

The oven-roasted chicken with burnt lemon is allowed to be chicken, but excellently so. The rabbit shepherd’s pie is another good example of this approach, homey but fascinating.

As mentioned I am a country girl and have eaten plenty of venison in my time. It’s often tough, better in sausage or chili or something else that wrestles it into submission. The coffee dusted seared venison is tender, and shows no detectable signs of being pummelled. It comes from Cervena in New Zealand, and according to Terry the cooking method is “don’t overthink it,” rolled in coffee grounds, seared, basted with butter and a little thyme and garlic (I asked).

The majority of the menu however comes from local farmers with whom Terry has long-established relationships. His introduction to Farm Burger was driving out to Full Moon Farm near Athens just in time to help with the chickens.

“If you order a cheese plate in December and there’s strawberry jam on it, it’s because those strawberries were grown here,” Terry said. “When beans are in, I hustle. I say, let’s buy them all and get some cans on the shelf. We would never buy that stuff.”

Terry said he enjoys his job.

“It’s great to be living and working in your own community. This is the dream,” he said.