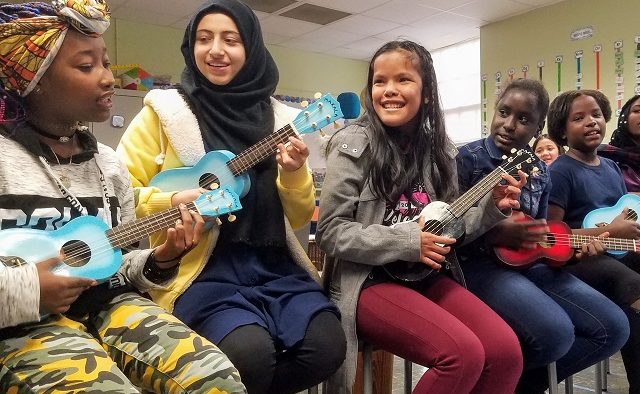 Nasteho Ibrahim, 18, is an alumna of Global Village Project (GVP) a middle school in Atlanta for refugee teenage girls who have had their educations interrupted.

Ibrahim moved from Somalia and enrolled at GVP when she was 12, along with her older sister, who was 15 at the time. After spending two years there, Ibrahim and her sister have gone through high school together at Druid Hills, and they’re both set to graduate in May 2020.

“Global Village is a family to me,” Ibrahim said. “Moving here was kinda hard because when you come here, you’re expected to make a whole new community – you know, you leave your old community back home. If you’re lucky enough to enter into this community, you get a lifelong community and lifelong support.”

And while Global Village Project has “project” in the name, “it is bigger than a project,” according to Amy Pelissero, head of school for GVP.

On average, students spend three years at GVP, filling gaps in their schooling to prepare them for high school. The average age of students is 13.5, but the age ranges between the 11 and 18.

There are varying academic levels, too. Jennie Jiang, marketing and communications specialist for GVP, said that sometimes, students coming in are on kindergarten to second grade levels in reading and math.

“It’s really impressive to learn just how fast our students progress,” Jiang said. “GVP students typically progress at two grade levels per academic year, which is twice as fast as most students are expected to progress.”

A large part of that success can be attributed to the time, effort, and resources that have gone into developing the GVP model for refugee learning.

“We’ve focused on four core areas, which are social and emotional learning, mentoring, English language and literacy, and STEAM,” Jiang said. “We also track a lot of data to be able to get a sense of impact that our model is having on the students, and the results are really quite phenomenal.”

After graduating, the alumnae typically go to high school in DeKalb County. To aid this transition, GVP runs a mentorship program to support these young women navigate the change from a small community of 40 to 50 students to a public high school.

“After they leave GVP, 96 percent of our students who complete the program and are matched with a mentor when they leave end up continuing their formal education,” Jiang said. “That number is great because, typically for refugees, the dropout or disappearance rate is around 75 percent, so only about 25 percent of refugee students end up graduating from high school.”

For Ibrahim, that support has been unfaltering.

“I’ve been out of that school for four years now, and they still support me,” Ibrahim said. “I have my mentors with me. I have them with me every step of the way.”

And when they go to high school, GVP alumnae are doing “really well,” said Pelissero, exceeding their initial expectations.

“Originally, we were just hoping that we could get them into high school and help them graduate,” Pelissero said, “[but] we’ve had a large number of students who have been able to go on to college.”

Since the start of GVP, 45 girls have gone one to graduate from high school, and 35 have gone onto enroll in college, some receiving full-ride scholarships. In addition to going on to college, some GVP alumnae have gone on to find success in other places, such as opening a restaurant or pursuing a career in real estate.

Ibrahim has jump started her college education and is currently taking classes through a dual enrollment program at Georgia Perimeter College. She hopes to go to Washington University and pursue a career in the medical field, possibly as a physician’s assistant.

After four years have gone by since her time at GVP, Ibrahim couldn’t pinpoint one, favorite memory so she said, “Everything. I miss that school so much. Everyone there is like a mom to me.”

After hitting the milestone of 10 years of operation, GVP is looking to expand their reach, creating a new three-year strategic plan in 2021. As for their expansion, Pelissero said that they’re looking to do more work with not just refugee learners, but with immigrant and asylee learners, too, possibly near the border areas.

“Our desire is really to take what we’re doing here and find ways to share it, spread it, and expand it locally and globally,” Pelissero said. “We’re really hoping that in the next decade, we might be able to find other spaces where this model would be appropriate in the United States or even abroad.”

In terms of local impact, there’s a lot that the community can do to support this model.

For starters, GVP operates exclusively by donation, and expenses for students such as tuition, transportation, and field trips are paid for by the school. And these donations mostly come from individuals.

The model also necessitates community volunteers. During any given week, between 120 and 150 volunteers are involved with the school, helping out with tasks such as tutoring, classroom support, music and instrument lessons, and various events.

Aside from monetary contributions and volunteers, Pelissero said that people can also show support through “a willingness to share and engage with this community.” GVP invites locals to be advocates for refugees’ access to education and engage with students and staff through events.

GVP hosts an “Author’s Tea,” which is a chance for people to see what students are accomplishing at GVP and interact with students and staff.

In addition, GVP hosts “Welcome Walk,” an annual walk from Clarkston – where the students live – to GVP in downtown Decatur, and the goal is to grow the connection between the two communities of Clarkston and Decatur. They just held the 7th annual walk in November, where more than 300 people walked the entire length and participated in a celebration at the end of the walk with community partners and local businesses.