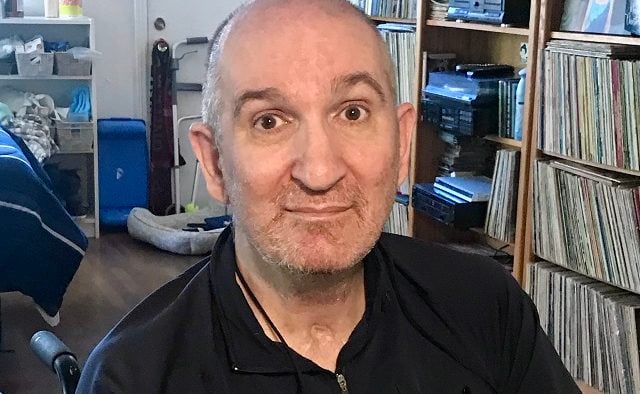 This past week marked five years since Greg Germani came home from the hospital after suffering a traumatic brain injury.

“I would say I’m doing quite well,” Germani said.

In June 2014, Germani was riding his bike home from work when he got into an argument with a man driving a red Dodge Nitro, Joseph Alan Lewis. After the argument, Lewis chased down and hit Germani with the vehicle. Lewis was sentenced to 15 years in prison after pleading guilty to some of the charges related to the incident in 2015, Decaturish previously reported.

The road to recovery has been long for Germani but he is doing well and is healthy. Harrill said Germani has made some phenomenal strides in his recovery. He also hasn’t been in the hospital or had any emergencies or falls recently and his short-term memory is continuing to improve.

Germani has continued to make Christmas wreaths, notebooks, jewelry and coasters out of vinyl records and album covers. These items are sold on an online Etsy store, VinylUpcycleGeorgia. There is also a Go Fund Me account supporting Germani’s recovery.

“The Second Life Animal Shelter and Thrift Store in Avondale Estates donates records that they can’t sell, either ones that are scratched or the they have duplicates of, and they give them to us to re-purpose, and so we’re really lucky to be able to do that,” Harrill said.

Germani also goes to the movies often, meets with friends for lunch, visits his favorite restaurants and plays Scrabble when his friends visit.

“I bet 98% of the money I ever spent in that mall was at the movies. Because I go once or twice a week and seldom do I go elsewhere in the mall but I do if I need to,” Germani said.

He also has an Alexa and enjoys telling her to play music. Harrill said music is a good recovery tool and the Alexa gives Germani some independence.

“The quality of the music she plays is just always up there with the best of the best,” Germani said.

Years ago, Germani started Atlanta Time Machine where he posts old and new photos of buildings, like buildings featured in the movie “Smokey and the Bandit”.

Germani would find an old photo of a building from the archives at Georgia State and would then try to recreate the image to show how Atlanta has changed. Each photo also has a short description of the building’s location and a little bit of history.

“That lured my curiosity. So, I was looking for pictures, I found a tremendous wealth of pictures of these buildings from the 1950s and 60s,” Germani said.

When he rode his bike to and from work at Turner, Germani started noticing all these buildings that have history.

Germani hasn’t posted on Atlanta Time Machine since before his accident.

“One of our goals for 2020 is to get Atlanta Time Machine back up and running and posting new things,” Harrill said.