Images in this mural represent the community through the portrait of Hosea Williams, with a bag from the DeKalb Farmer's Market as well as a soccer ball representing the Atlanta United fans who use the station. The mural is located on W. Howard Avenue. Photo provided by Living Walls.
Share

Artist Nicolás Romero Escalada was selected to paint the murals. In October, he stayed with an East Lake family to find inspiration for the mural.

During his study, Escalada met with residents of East Lake, Kirkwood, Oakhurst and surrounding areas. He also talked to people at the station and went to local businesses. One thing that stood out to him was the concept of change and transition.

“I know that one of the things that he wanted to represent was the transition that the three surrounding communities have been going through for a while,” said Monica Campana, executive director of Living Walls.

The end result is two murals that include symbols that represent that concept, as well as historical figures and the local people.

Campana said the murals might seem bizarre or cute or funny at first glance, but they slowly draw people in and cause people to wonder what each element is.

“The more that you look at them, you will be able to realize that they are all different puzzle pieces of what makes this MARTA station special and gives you an understanding of the three communities or three neighborhoods that are directly surrounding this MARTA station,” she said.

The two murals are located on the wall on W. Howard Avenue with the MARTA sign and the wall in the parking lot facing Paden Circle.

Painting a MARTA wall was a goal for Living Walls because the walls are very visible to the public and this is one of the organization’s biggest projects to date, said Amanda Norris, communications manager for Living Walls.

“Painting this MARTA wall is significant because it’s a big point of connectivity. This station is in a very residential area and it connects so many neighborhoods including Kirkwood, Oakhurst, Lenox Place, Druid Hills, and Decatur,” Norris said.

The mural facing Paden Circle has images of hair clippers, a child-like drawing and a Progresso soup can. 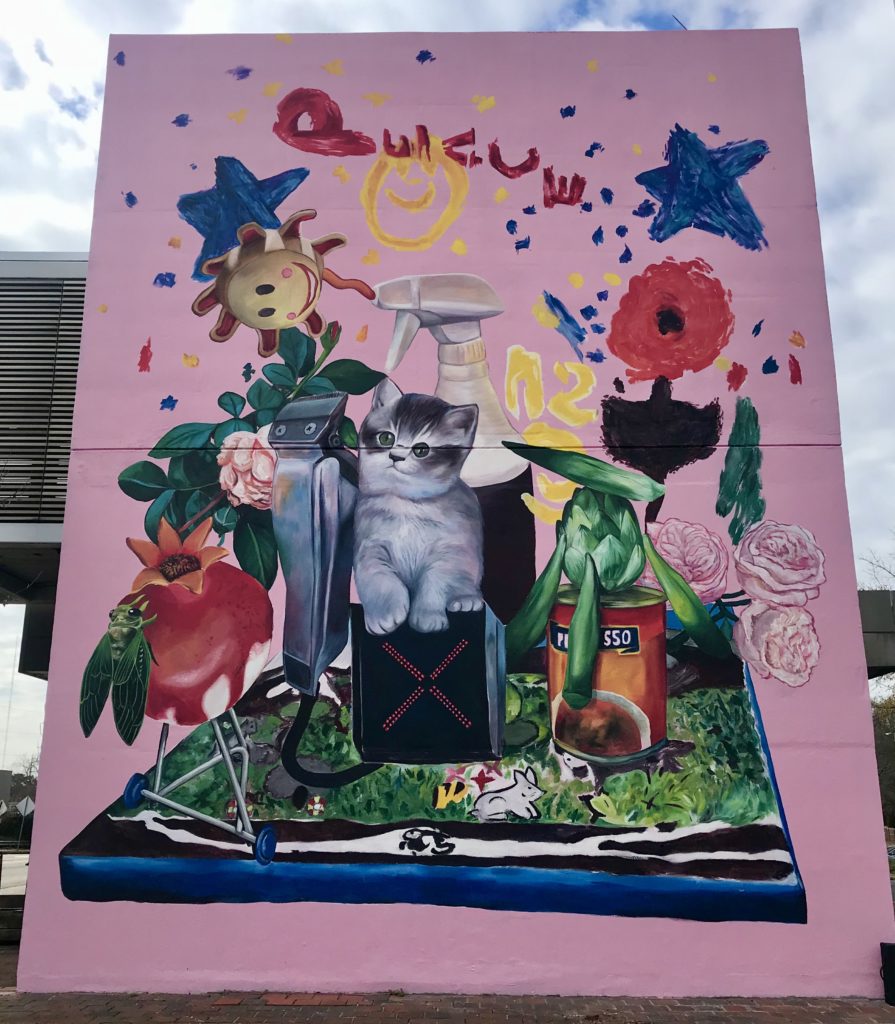 This mural depicts images of hair clippers and a Progresso soup can that represent change and transition. The mural, located on Paden Circle, also recreates a painting from a local artist. Photo by Zoe Seiler

Both murals feature soup cans that fit into the theme and also represent people in the community who pick up immigrants and homeless people from the station.

“Being from Buenos Aires he had never seen a Progresso canned soup before, and he thought it was really awesome because without one of the S’s, it’s progress in Spanish and he kept hearing this narrative of change and transformation and so he really wanted to include this Progresso can,” Norris said.

The mural on W. Howard Avenue features Hosea Williams, a former aide to Martin Luther King Jr. and a leader of the Civil Rights Movement. This mural also represents transition and change with the depiction of a monarch butterfly.

Campana said the butterfly pays respect to the immigrant communities from Clarkston and also the diversity of the surrounding areas.

Two Atlanta artists, Krista Jones and Angela Bortone, worked with Escalada on the project. Jones was contracted by Living Walls as the project manager for the murals, making this her fifth project with the organization.

Each artist had specific elements of the murals to focus on while also working on other elements together. For example, Jones painted the cicada on the Paden Circle mural, but all artists worked together on the child-like drawing on the same mural.

“Then [Escalada] focused on the other areas, some of the detailed things like the cat, the clippers, the can,” Jones said. “Then, after he was done, he came back in and touched up a few things.”

Jones said it was interesting to work on the project with Escalada because they have similar working habits. She said everything was roughly sketched out, so it was just a matter of looking at the mockup and photographs of the objects and the creating each element.