Pinewood 2.0: Decatur restaurant under new management, but how’s the food?

Pinewood 2.0: Decatur restaurant under new management, but how’s the food? 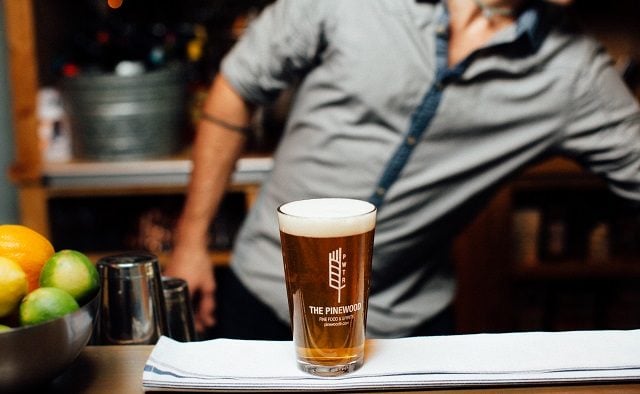 The Pinewood is under new management, and soon new ownership.

Caught up in the troubles of 10 Apart Hospitality Group, which is filing bankruptcy amid closures of its other restaurants The Mercury, Deep End, Bar Crema, and Bar Americano, The Pinewood seemed like it might close as well. But a combination of dedicated existing staff, new bar manager Kasey Emmett, new general manager Moose Wylde, new executive chef Demetrius Brown, and new owner Teresa Dau are breathing new life into The Pinewood, which first opened its doors in 2012. The restaurant is located at 254 W Ponce de Leon Ave in Decatur.

According to Brandon Blanchard, a consultant Dau hired to help facilitate the transition, 10 Apart has allowed new ownership to come in and start making changes ahead of the official transfer of assets. Under an agreement which should be finalized Dec. 16, Dau will assume responsibility for outstanding invoices and expenses connected to The Pinewood and assume full ownership in January. Financial obligations connected to other assets owned by 10 Apart will remain the responsibility of 10 Apart.

Blanchard says that he felt The Pinewood’s biggest obstacle moving forward was a lack of clear culture and direction, so he set about figuring out what it should be. Dau, a Decatur resident who was a long-time customer and previously was an investor in the restaurant, saw The Pinewood as a community gathering place that she wanted to protect. Feedback from existing customers as well as staff became part of the process.

“We sat down with the staff and said, ‘tell us what this place is to you,” said Blanchard.

According to Blanchard, “It’s all about how you take care of people whether [staff] or guests. If you have a great culture where people feel a part of something that they value that they can call their own and it’s fun, they’ll do whatever needs to get done and have fun doing it, and that gets reflected onto the guests as well.”

Moose Wylde built up the food service at the University of West Georgia after they stopped contracting out to Aramark.  He left that very secure position, teacher’s pension and all, in order to take on the challenge of being general manager at The Pinewood in the middle of a bankruptcy filing.

“That was a tough conversation with my wife,” he laughed. But Wylde says, “I come every day and I’m really happy with what I’ve done.”

Sometimes that includes walking back a decision, after some customer favorites got removed and the changes were met with resistance..

“Being honest in business means admitting when you’ve made a mistake,” says Wylde. Grit tots and burgers are back on the menu after a brief absence. Wylde says he’s not here to “fix” The Pinewood. “I’m here to find the next future of The Pinewood.”

Chef Brown says he takes inspiration from everywhere he’s lived — Trinidad, Rhode Island, and of course the South — as well as his restaurant industry background at Canoe, Lady Bird, and The Hill at Serenbe. Taking on The Pinewood has been a bit of a challenge, he says. “You don’t want to change everything too fast, but you don’t want to change it too slow either.” 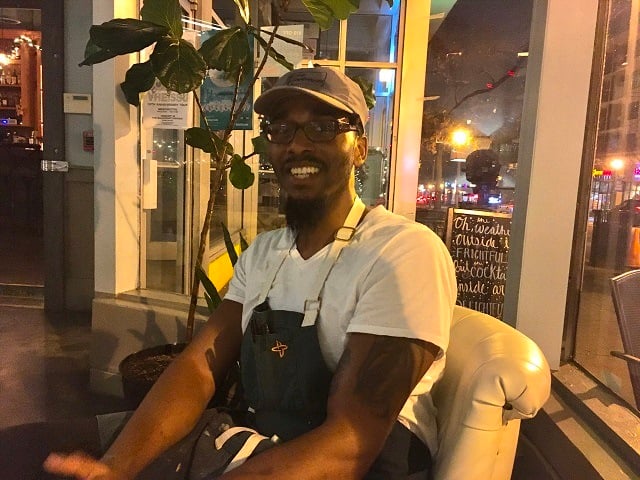 He talks animatedly about food and his approach to it, speaking of seeking perfection but also familiarity, as if “you’re coming into one of our houses and we’re cooking for you.”

But how’s the food?

The smoky wings are tasty, complex, and smoky (as advertised). A blue cheese dressing with a touch of vinegar adds variety, but the wings are good by themselves. The crispy Brussels sprouts had a bit of Asian flavor from a combination of the pork belly and Medjool date glaze and were so good I had to refrain from licking the plate.

Bar manager Kasey Emmett is clearly having a good time with the cocktails. Love Potion No. 9 is a frivolous concoction of a drink, with a pleasant grapefruit flavor from the combination of lemon, elderflower liqueur, and gin. Love isn’t all sweet, you know.

I have a love-hate relationship with bourbon. A little spicy, a little bitter, and a little sweet, Cold Case reminds me why I keep coming back no matter how bourbon does me. Don’t knock this drink back too quickly, since the flavor evolves as the single large ice cube melts. Sip it slowly while thinking about the dame who just walked out of your detective agency and out of your life for good. “You know how to whistle, don’t you? Just put your lips together and blow.”

The cheese and charcuterie plate had its winter face on, so pickled strawberries and fermented carrots accompanied the salami, spicy coppa, and Thomasville Tom cheese.  The beet salad was a tasty divergence from the usual beets-and-goat-cheese version you find everywhere, and it took full advantage of the tang of pickled beets and the earthy taste of roasted beets, kept light with citrus.

The pan seared salmon with faro risotto was good, especially since the risotto was not just a background for the fish but very tasty in its own right.  The chicken and dumplings were outstanding. My mother made a cream soup-based version and that’s my normal standard.  Brown’s version has a clear broth and it’s a little spicy and a little fancy, yet it’s still solid comfort food, like a hug in a bowl.

The beignets were both light and fluffy and slightly chewy, exactly as they should be.

My recommendations:  Order Love Potion No. 9 and the “beets several ways” salad when you are on a first date and full of optimism.  Order Cold Case, chicken and dumplings, and beignets after your heart is inevitably broken, because they will make you feel better and give you strength to try again.