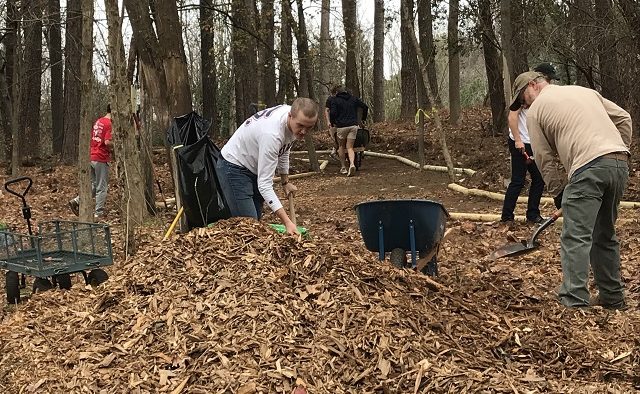 North Druid Hills is getting some more green space at the corner of Jan Hill Lane northeast and Georgiana Drive northeast.

The Southeastern Trust for Parks and Land is working with community members to build a pocket park.

A developer was going to build houses on the land, but residents were able to save the land from being developed. After that, the developer donated the land to the Southeastern Trust for Parks and Land in December 2018.

“The person who had it realized that their plans to develop it weren’t working out and it made sense just to give it to us,” said Bill Jones, executive director of Southeastern Trust for Parks and Land.

Southeastern Trust for Parks and Land is providing some funding for the park and is also seeking donations of money, time and plants from the community, Jones said.

“I really think it is just a new park out of nowhere, without using any taxpayer money or any local government involvement,” Jones said. “That’s the cool little thing. It’s not fancy but by its very nature it’s supposed to be simple. We use the phrase quiet enjoyment of nature, just a place where you can sit and be still.”

Over the past year, Jones and community members have cleaned up the land, built a woodchip path, put in two benches and planted some new plants.

Jones worked with Boy Scout Troop 1134 on Dec. 7 to build the woodchip path. Eagle Scout Dom Florio worked to lead members of his troop with the project.

“I’ll keep getting more woodchips to make it denser and then we’re going to add native flowering plants, some bird houses, a chimney swift tower is another thing,” Jones said.

The goal of the park is also to build community through building the park and visiting the park.

“The idea is if people start coming here and hanging out with their kids and sitting on the bench you meet your neighbors. It’s a community gathering contact point, particularly a place where people come, and they’re relaxed,” Jones said.

The park will be an ongoing project in terms of maintenance and planting. It will take time for the plants to reach their full potential, Jones said.

“I really hope to have it just be spectacularly beautiful in about five years with plants and things,” Jones said.

Jones said one reason the park hasn’t been named is because since it’s a community park, he thought there may be a person or theme that the residents in the area would like to name the park after.

The park is currently open to the public. Anyone interested in getting involved is encouraged to email [email protected].