A sinkhole grows in Tucker

A sinkhole grows in Tucker 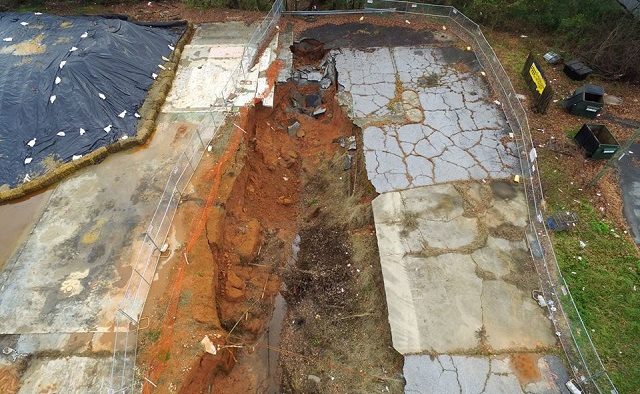 Exhausted by excuses and lack of transparency, a public safety hazard just feet from a state highway has sparked Tucker residents’ sense of humor.

A longstanding sinkhole at 4141 and 4147 Lawrenceville Highway has its own Facebook page – The Tucker Crater – where locals post aerial photographs by drones and poke fun at the lack of progress in repairing the deep hole.

Tucker business owner Scott Rippy told Decaturish a stream ran through the area 60 years ago, when the property was in-filled to build a gas station. There is disagreement about when the sinkhole first formed. According to a lawsuit about the sinkhole, it was first observed in 2017.

It is believed that pipes carrying stream water corroded, causing the sinkhole. The lawsuit alleges the sinkhole formed when a 48-inch storm drain pipe running under the property collapsed.

According to DeKalb County tax assessor records, the property owner is Mark Chen of Lilburn. Chen could not be reached for comment.

Rippy said, “The county says it is the fault of the property owner; the owner says it’s the city; the city reps say it’s not their problem. There’s a lot of finger-pointing.”

The sinkhole is located five blocks from City Hall.

The property owner was issued a notice of violation by the City of Tucker Code Enforcement on June 14, 2017. According to a city spokesperson, Tucker worked with the DeKalb County Fire Marshal to install a safety fence around the property on Sept. 20, 2017, when the Tucker Tire and Complete Auto Care building still stood on site. Ultimately, the building had to be removed, Tucker spokesperson Matt Holmes said.

“Because of pending litigation on the part of the property owner, further progress in addressing this problem was stalled until Nov. 30, 2018, when the City again issued a notice of violation to the property owner,” Holmes said. “The case went back to Municipal Court, where the judge facilitated a consent order that stipulates milestones for the full remediation of the property.”

The Tucker Tire and Auto Care building was decimated in February 2019. Yet, the sinkhole grew.

In March 2019, residents reported to GDOT and inquired with Tucker Code Enforcement.

Straw bales and a large mound of dirt were delivered to the site in December 2019. According to the city, the weather has prevented further action.

Holmes added, “On Jan. 17, 2020, the City of Tucker and GDOT issued a building permit to the property owner’s contractor to address the issues. Work is anticipated to be completed in the early spring of 2020. All of these issues have occurred on private property.”

“I am familiar with the sinkhole at 4147 Lawrenceville Highway in Tucker,” she said. “I am personally concerned, because I do not want to see this … affect public safety. It has been present and growing for almost three years. The property owner bears the responsibility to repair the sinkhole and ensure that it does not affect public safety. However, in lieu of the length of time the matter has gone unaddressed, I have growing concerns for his lack of action on the matter. I know GDOT has been engaged in the matter due to the expansion of the pothole and its proximity to Lawrenceville Highway, so I hope to see this matter resolved between all parties soon because time is not on our sides as the sinkhole grows.”

To advertise with Decaturish, click here or email [email protected]ecaturish.com