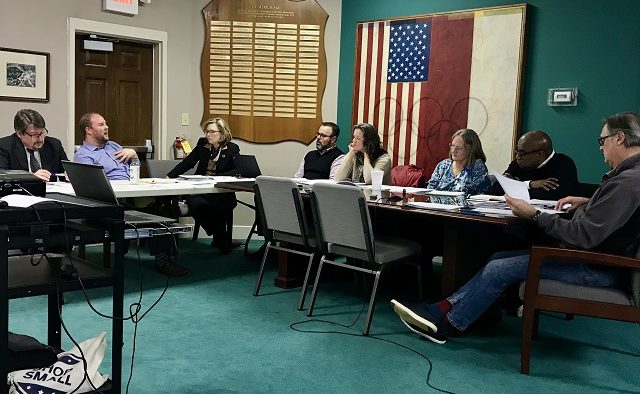 Over the past several months, the city of Avondale Estates has worked with the Carl Vinson Institute at the University of Georgia to conduct a compensation and classification study for city employees. At the Jan. 22 Avondale Estates City Commission meeting, CVI presented its study. The commission also discussed revising the sanitation ordinance and establishing sanitation fees for 2020.

Alex Daman, project director for the compensation and classification study, presented to the board the elements of the study, the processes used, the data collected and how CVI arrived at their recommendations.

The goals of the study were to create new job descriptions for all city positions, develop a new classification system to rank jobs, collect and analyze wage survey data, establish competitive pay levels and train Avondale city administrative staff on how to implement and maintain the system.

The CVI identified 21 positions within the city government and then created a set of criteria they were able to use to uniformly evaluate each position in order to assign them to a salary grade.

Part of the study also included a wage and salary survey to look at what other employers pay their employees to similar types of jobs. The CVI then analyzed that data to come up with a compensation plan for the board to consider.

The compensation plan includes a pay band. The CVI proposed 15 salary grades for which a position could be assigned to. Each salary grade has a pay band, which is a salary range with a minimum, mid-point and maximum salary that an employee could be paid as their career progresses. 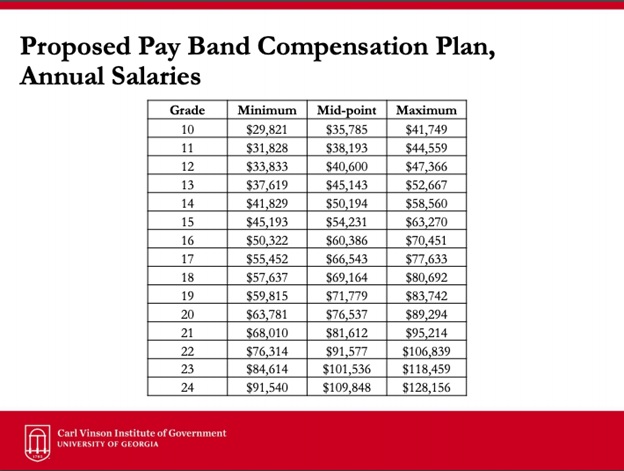 Photo taken from the Carl Vinson Institute’s presentation, obtained via the city of Avondale Estates.

Daman said the initial goal is to make sure that city employees are all receiving the minimum salary for their position.

The study also looked at the city’s ability to retain employees. Daman said that the current length of service for a city employee is currently just under three years, which is lower than the average for public sector organizations throughout the U.S.

Daman added that the assumption is that by increasing the city’s wages to be more competitive that will help with retention by reducing voluntary turnover related to an employee seeking a higher paying job somewhere else.

The position with the highest turnover is maintenance workers.

“The impetus for going through this process [was] that we were significantly under compensating certain positions and this position was certainly one of those,” City Manager Patrick Bryant said.

The CVI’s initial recommendations are to assign all city employees to the recommended classification and salary grade associated with their position, and look at their existing annual salary relative to the minimum salary, Daman said.

The estimated total cost of implementing the compensation plan is about $107,000. Although in order to adjust to the consumer price index for 2020, the total cost increases by about $33,000 to about $140,000, Deputy City Manager Paul Hanebuth said.

“We actually budgeted $95,000 more than the entire cost of implementing the recommendation,” Bryant said.

The board also discussed revising the sanitation ordinance to have business owners be responsible for commercial sanitation instead of paying for that through property taxes. The sanitation fee would also be collected on a usage basis rather than based on the business type.

“Basically, this is a better way for us to assess the appropriate charge for the cost of the service to provide it that way. No one constituent group is shouldering the burden of the service any more than any other,” Bryant said.

As part of the ordinance, the board must also set the sanitation fees for the year.

The board previously discussed attaching the fee to the occupational tax in order to receive a business license, Bryant said.

“This goes to not only help us assess the appropriate charge for the cost of service, but it also keeps us from having to subsidize the cost of service with property taxes for the majority of the year. So it really does a lot to revamp the entire sanitation system so that we are more efficient and effective,” he added.

The proposed base fee for businesses is $895 but if a business needs more than one can picked up, there would be an additional charge of $190 per can.

“The base fee for businesses is less than what the lowest fee was for any business charge previously,” Bryant said.

The resolution would also change the residential fee to $495 annually per household, however that could change as the board makes a decision about the city’s recycling service.

Currently, the city has a contract with Latham Home Sanitation to pick up residential recycling.

“Per the terms of that contract, Latham is able to request annually an increase in the fee that they charge us based on their disposal fee,” Bryant said.

Latham could also request a consumer price index adjustment per household to cover their other costs besides disposal. Any other cost adjustment would require a new contract.

“Through communications with Latham within the past 24 hours, they have indicated to us that they can remain within the terms of the contract if we so choose to continue allowing them to provide us with service,” Bryant said, adding, “The increase would be $60 a ton disposal rate and $0.10 per household which is within the two-year increase of CPI, since there was no CPI adjustment the year before. Those are the only terms the city would be able to accept to remain in the bounds of the contract.”

The board would have to consent to an increase in cost or it could choose to issue a request for proposal for the service.

The increased disposal fee and the adjustment per household would mean the residential fee would increase by about $13.

“So if we wanted to continue within the bounds of the contract with the proposal that Latham has provided to us, in order to offset that cost, we would need to raise the residential fee from $495 to $508,” Bryant said.

The board is set to vote on the fee resolution as well as the compensation and classification plan at its next regular session meeting at 6:30 p.m. on Monday, Jan. 27 at City Hall, 21 N. Avondale Plaza.