Decatur Mayor, School Board chair give ‘State of the City’ speech

Decatur Mayor, School Board chair give ‘State of the City’ speech 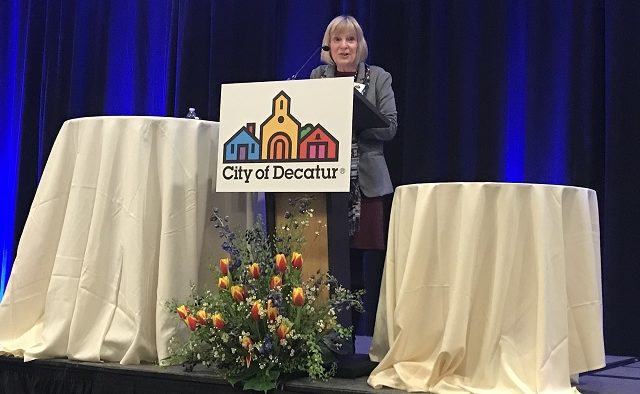 Decatur Mayor Patti Garrett gave the State of the City address at the Decatur Business Association meeting on Jan. 28, at the Courtyard by Marriott Conference Center in downtown Decatur.

School Board chair Lewis Jones joined her and gave an update on the state of City Schools of Decatur.

The Thomas O. Davis Public Service Award was given to Sara Collins of the DeKalb County Public Library. Collins has worked at the library for 15 years.

This award honors a public employee who helps strengthen the bond between government and the community, contributes to the well being of the community and inspires others to get involved in public service, among other things, Decatur City Manager Andrea Arnold said.

Jones, the School Board chair, began his speech highlighting one of the best things he said the school board does, which is hiring and managing the superintendent.

“The best thing that we have done for the city of Decatur, is to find and hire and keep Dr. David Dude. Dr. Dude is in his fifth year and he’s going strong and we’re very lucky to have him,” Jones said.

He also highlighted several other accomplishments of the City Schools of Decatur.

“Our academic programs are widely respected, our athletic teams are winning, we have outstanding programs in music, drama, and the arts. We’re about to add the symphony. Our career tech academy is a model for the state. And it’s all working and the evidence is that our kids are thriving,” Jones said.

Jones talked about racial equity in the school system.

“We have serious disproportionalities both in discipline and in academic outcomes,” Jones said. “And these are tough difficult systemic problems but that’s not an excuse, and they’re not acceptable and we’re working hard to fix them.”

He again praised Dude for his work specifically on tackling this issue and said that equity is the No. 1 priority for the school board.

Jones said that almost every staff member has participated in equity training and that training is now available to the public.

“The Decatur Education Foundation is now funding this and making it available to the public at large. I can’t recommend it enough. It will change the way that you think about these issues. It did for me,” Jones said.

He encouraged anyone who is interested in signing up to visit the CSD website where there is a link to community training.

She also mentioned the health of the downtown business district which has seen some businesses close. She said 19 new businesses and restaurants and one new hotel opened in the city in 2019. She said the vacancies in the downtown have increased slightly: there’s now a 6% vacancy rate compared with last year’s 3% vacancy rate.

Garrett also discussed strategic planning and projects the city is working on at Legacy Park, the former United Methodist Children’s Home property. She said the city intends to add housing options to the park, renovate existing buildings and a track and field.

The city purchased the land that is now called Legacy Park in 2017. As part of the original agreement, UMCH retained ownership of the Moore Chapel on the property, however, Garrett said that the city was recently able to purchase the chapel.

“We look forward to ways that we can incorporate the chapel and its use into our community master plan. It is truly a historic gem on that property,” Garrett said.

The city of Decatur recently received the Georgia Municipal Association’s inaugural Visionary City Award and was honored by Georgia Trend Magazine along with nine other cities, Garrett said.

“The cities were honored for fostering healthy working relationships, and for making their communities places where people truly love to live and work,” she said.

Garrett also discussed the affordable housing task force and some of the things it was charged with doing.

“After we receive this report, our work will start. I have to say that we are excited about that work and next year there’s going to be some progress to report,” Garrett said.

She added that the city is committed to making meaningful progress related to affordable housing.

Additionally, Garrett mentioned that 2020 is the 50th anniversary of Earth Day and said the city will be celebrating with a parade, entertainment, speakers and more. The celebration is scheduled to take place on Saturday, April 18.

“I hope we not only celebrate but that we also contemplate what we can do as the city, as individuals, as homeowners, as businesses, places of worship, schools and institutions to reduce our environmental impacts. It’s important,” Garrett said.

“We know that other opportunities exist for all of us, and I look forward to seeing what comes out of the strategic plan to move us closer to achieving a goal of a healthier planet and that all of us are doing our part in that,” Garrett said. “It can’t just be the city by itself, it has to be all of the folks that I’ve mentioned before, each of us individually and as a part of our various communities.”