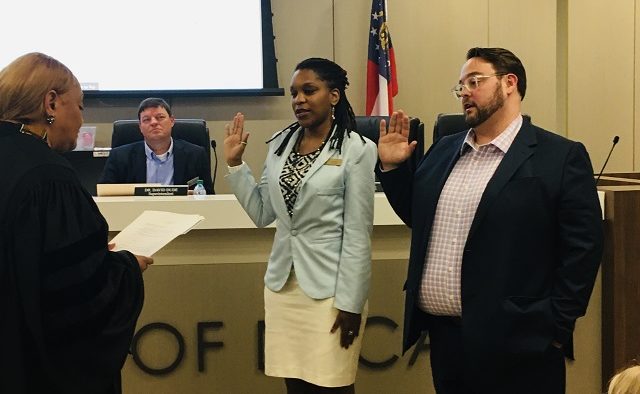 “I’d like to thank the community for the support I have received,” said White.

“I’d like to thank Tasha White for encouraging me to run,” said Herndon. “I was at the meeting where Garrett Goebel said he wasn’t interested in running again. I was here to complain about something,” Herndon laughed. He added, “I met with Tasha afterward and she said that she found this job incredibly rewarding, she had a lot of work to do, and she welcomed my participation.  I look forward to listening and learning, not just from you but from our friends and neighbors.  I can’t wait.”

The board discussed the fiscal year 2021 budget with the goal of determining a final budget by the February meeting, for the purpose of posting new positions and sending out contracts in a timely manner.

“In the past, the budget has been decided so late we have to send out teacher contracts with this year’s salary on them, and then we follow up the next year with a letter saying ‘well here’s your actual salary,’” said Superintendent Dr. David Dude.

He described the situation as “understandably frustrating” but one which getting the budget done earlier would resolve.

Finalizing the budget would also allow the district to proceed with new hires for next year. A raise in the cost of living adjustment to employee salaries from 2% to 3%, which would help to reduce turnover and make the district more competitive, is under discussion as well.

City Schools of Decatur has consistently spent less than budgeted over the last few years, resulting in money over and above the 5-15% held in reserve for emergency funds. The board discussed how that money could be allocated to one-time uses such as a capitalization fund.

“We’ve had a really nice run with tax-based increases for many years now, but we know that won’t always continue. At least we can’t count on it. We’ve lived through lean times too,” Tell said.

Executive Director of Operations Noel Maloof and Karen Daniel-Hamberg of Cooperative Strategies gave a presentation on facilities master planning which included enrollment projections based on existing data about how many school-age children live in which types of housing, combined with information about new housing in any stage of development. When all current projects are complete, they are likely to add 522 new students to the district.

Several schools including Winnona Park Elementary are currently operating at or slightly above capacity, and while rates of growth have slowed projections indicate that over-utilization of some schools is likely to continue.

“I think there’s a sense that we’re not going to listen, and this is all just a charade, but we have actually flipped proposals based on feedback,” he said.

The board plans to meet with the City of Decatur about homestead exemptions later this month and put together a committee to come up with a specific plan to renew the existing senior homestead tax exemption after it sunsets in 2021.

Jones congratulated Fifth Avenue Upper Elementary for receiving a bronze award in Highest Performing category in 2019 from the Governor’s Office of Student Achievement.